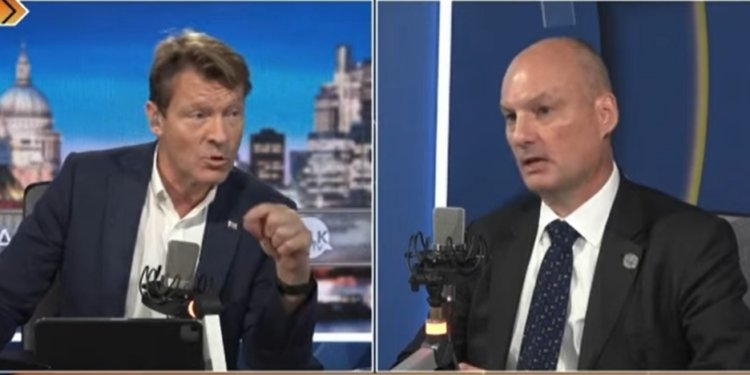 A fascinating encounter took place last Sunday when Richard Tice debated climate change with the green energy promoter and climate activist Bob Ward from the LSE Grantham Research Institute. Fascinating, because the certitudes of ‘settled’ climate science are not often debated in the public square. On his Sunday morning TalkTV show, a well-informed Tice interrogated Ward on many of his extremist positions, including the notion that humans cause all climate change.

“Do you think we can stop climate change?” asked Tice. “Of course we can,” replied Ward, seemingly ignoring the fact that climate has always changed, and always will. All of the recent warming is caused by humans, he argues. This extreme view, held by many who suggest the science around climate change is ‘settled’, downplays past large temperature movements. Ward claims much of these changes were related to long-term orbital variations. It is warmer now than at any time in the last 12,000 years, he states, despite evidence to the contrary. Ward dismissed such evidence as coming from bloggers and a single Greenland ice core. This of course is the ‘hockey stick’ argument, and has been debunked by numerous scientists. Two recent scientific studies, for instance, examining plant and animal remains, have indicated much higher temperatures in Arctic Svalbard, 9,000 years ago, and northern China 8,000 to 5,000 years ago.

Of course, the politicisation of climate science and the idea that it is somehow settled have long acted to reduce the role of other atmospheric influences. This makes it much easier to demand that humans stop using fossil fuel and sign up to a command-and-control Net Zero agenda. Faced with no choice – scientists say – submission on an increasing number of fronts is demanded, with changes required on diet, individual transport, heating and cooling and foreign holidays. Almost unimaginable amounts of money must be spent to save the planet. Mr. Ward has spent years promoting this agenda, and is the Communications Director of the LSE Grantham Institute. This operation is partly funded by the green billionaire investor, Jeremy Grantham.

Of course, the notion that you can somehow stop the climate changing is an irrational form of climate denial. As we have seen in many recent Daily Sceptic articles, there is a huge and greatly under-reported scientific discussion on the ways the climate changes. The issues range from the ‘saturation’ of carbon dioxide and its diminishing warming properties to the vast heat exchanges that have always had a vital part to play. Directly linking all warming and cooling to changes in CO2, a trace atmospheric gas, is a science hypothesis that is unproven. Not a single peer-reviewed paper exists that provides conclusive proof. All forecasts of imminent climate thermogeddon are based on climate models, but these haven’t produced a single correct forecast in the last 40 years.

Tice went on to note a number of excellent environmental news items, including record numbers of polar bears, huge coral growth on the Great Barrier Reef and a recovery in Arctic summer sea ice. “What you are doing is ignoring the trends and cherry-picking the bits,” replied Ward. Two pictures showing similar levels of Arctic sea ice on May 24th 1995 and May 24th 2022 were dismissed with the odd comment: “You take two days and try to establish a trend.” Even odder was his reply to the news that the world was getting much greener under the influence of higher levels of CO2. He replied it was good, although it hadn’t made up for deforestation. Throwing in an unconnected red herring is a tried and tested debater’s trick to deflect inconvenient facts.

Of course ‘cherry-picking’ is precisely what Ward does all the time. During the interview, he claimed that hundreds of people had died in the recent summer heatwave and ‘wildfires’ had broken out on the outskirts of London. Claiming that a number of fires igniting during a period of temporary drought on a hot English day were caused by human-caused climate change is of course absurd, and unprovable. Nevertheless, as global warming runs out of steam, with little change since 1998, a huge, well-funded academic industry has grown up trying to attribute single extreme weather event to long-term changes in the climate. It might not surprise you to learn that climate models play a major role in this highly political endeavour.

Towards the end of the interview, Ward became increasingly agitated, suggesting the questioning by Tice was putting his viewers “at risk”.

Debunking all these single event claims can be a full time job! At this point, I will just run the rainfall graph going back to 1840. As we have noted before, there is not much change in the past 180 years – the trend, it might be deduced, is fairly stable. A little extra rain recently, but not much different from the 1870s and the 1920s.

There is no doubt Ward would have been happier in a BBC studio, where he is a frequent visitor, and the questioning is more reverential. Indeed, it was something of a surprise to see him venturing outside his ‘safe space’. Almost all of his fellow green activists run a mile from such confrontations, hiding behind an increasingly smug ‘settled’ science claim and suggesting they will not ‘lend their credibility’ by debating people they smear as deniers. But the science is far from settled, and there are increasing demands for it to be investigated in the wider public space, as the awaiting horrors of Net Zero become increasingly apparent.

Stop Press: Paul Homewood in TCW: Defending Freedom has fact-checked Ed Miliband’s hysterical claims about the risks of fracking after he gave an interview to the Independent in he said fracking won’t reduce gas prices, it isn’t safe and renewables are the only answer to our energy woes.