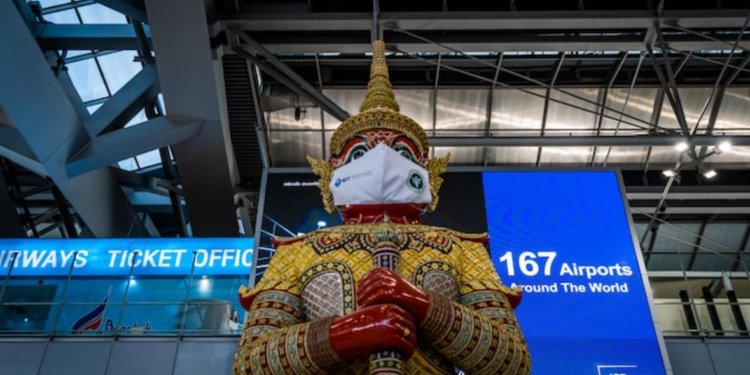 Early in 2020, I would have told you that the days of international travel were over, at least for those of us who chose not to roll our sleeves up for a certain medical intervention. And yet here I am two years later in Northern Thailand on an extended stopover en route to a new life and job in Vietnam, my Cassandra tendency unwarranted.

That’s not to say that medical discrimination is over. As members of the unvaccinated class, my family and I were required to take a ‘professional rapid antigen test’ for COVID-19 ahead of travel. £60 bought us a QR code each on a PDF certificate, glanced at by an airline representative in Heathrow Airport and then by no one else at all on an arduous 18 hour journey transiting through Muscat, Oman.

Upon arrival at the dizzying expanse of steel, glass, colour and crowds that is Bangkok Suvarnabhumi Airport, we found the spectre of COVID-19 alive and well. A curious and conspicuous divide soon became obvious. Almost without exception, Asian people wore face masks and Westerners did not. Masks were clearly not required in the airport; we weren’t challenged once on our way through the many checkpoints. Gigantic sculptures of the demon king Thotsakan towering over the third level concourse had been fitted with their own enormous face masks to remind travellers of their civic responsibility; a somewhat demeaning appearance for such a fearsome mythical warrior.

Passing through customs, intimidating border guards demanded that travellers remove their masks for identification. This they did, before returning them again quickly, restoring their safety. But was this about safety, or something else?

We stayed for two nights at an airport hotel with a pool, primarily to reward the children who had endured two days of delirious travel like champs. The hotel staff wore red badges, to reassure guests that they had been Covid vaccinated, while signs around the place reminded visitors of the need to remain alert to signs of the virus. Visits to small local markets and stores during the following days revealed a society still very much in pandemic mode. The unwritten and unenforced rule appeared to be that masks must be worn by anyone at work or in an enclosed setting. And while no one challenged me as a bare-faced interloper, it was hard not to feel callous and inconsiderate. This was a people who had clearly been heavily, shall we say advised, and to whom mask-wearing appeared to have become intertwined with Asian social values such as respect, selflessness and courtesy to others. With this in mind, I wondered whether a ‘when in Rome’ attitude was appropriate, a feeling I have never once experienced in the U.K.

On day three, we left Bangkok on a domestic flight north to Chiang Rai. Upon boarding the plane, we met our first direct challenge, from a middle-aged Thai gentleman sitting next to my wife in the row behind. He asked her to put a mask on and called over a stewardess for assistance, who duly advised him that they were at this point optional on flights. My wife, not wanting to upset him nor endure an awkward 90 minutes, put one on that she had instinctively retained from an Oman Air ‘hygiene pack’ a few days earlier. I glanced back at her; it was the first time that either of us had ever worn one and I felt both sympathetic and proud of her. How insane these feelings would seem to people who had made them a routine part of their everyday lives. As it turned out, the man was very friendly and appreciated my wife’s respectful conformity. He had had Covid, he told her, and didn’t fancy catching it again. Like so many others, he clearly didn’t feel particularly protected by the vaccine he had almost certainly received.

We were met off the plane by an old friend of my wife’s who had retired to the region and who had unfortunately bought heavily into the pandemic. He told us that masks, while in decline, were still being worn out of respect toward others, confirming my reading of the situation while in Bangkok. He took us to a restaurant, where he told us we would be required to wear them on the walk from the car to our table but not while seated. The spirit of the scotch egg is alive and well in Thailand, and although I managed to get away with it on that occasion, it’s hard to see how I will be able to avoid at some point putting one on during the next week.

I worry that we will find a similarly illogical state of affairs in Vietnam, a country where I will soon be living and working (in an enclosed setting). Have I foolishly signed myself up for years of continued Covid theatre that seemed over and done with at home? I’ll let you know when my work permit has been issued.