“If We Get Covid, So Be It”: Cries of Hypocrisy as Australia Allows Covid-Positive Cricketer to Play Despite Deporting Djokovic Over Vaccine 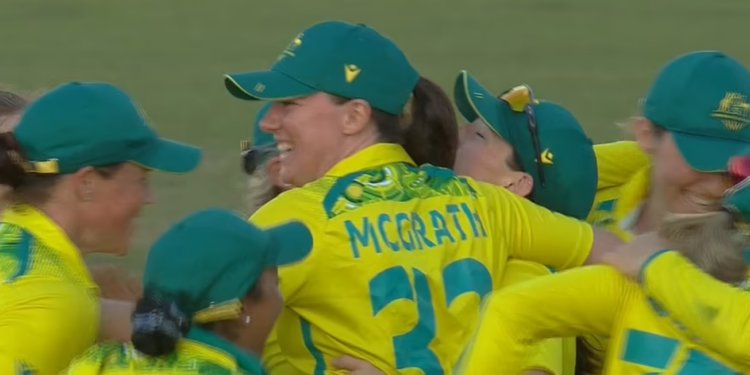 Australia’s decision to field a cricketer who tested positive for COVID-19 at the Commonwealth Games has sparked claims of hypocrisy given the country’s hard line on lockdowns during the pandemic and its decision to deport Novak Djokovic over his vaccination status. MailOnline has more.

Tahlia McGrath was permitted to play at Edgbaston in Birmingham yesterday despite testing positive. She bowled and batted in the match and also took the catch that dismissed India’s star opener Shafali Verma as the Southern Stars took gold.

She batted at No. 4 without a mask before she was dismissed after scoring just two runs off four balls. McGrath then bowled two overs for 24 runs and also took a catch, when she held up her hands to warn her fellow players not to come and celebrate with her.

But when they won the game, McGrath jumped into the huddle and hugged her teammates. Australian bowler Megan Schutt said afterwards: “If we get Covid, so be it.”

Had the match been played in Australia, McGrath would have been forced to isolate for seven days. But in the U.K., where self-isolation rules are advisory only, Ms. McGrath could play.

She had woken up with mild symptoms yesterday morning and then returned a positive test. However, she was still selected in the Aussies’ XI after tournament organisers approved her participation following consultations before the toss, which was delayed.

McGrath did not line up with her team-mates during the pre-match national anthems and did not join them in the dugout while they were batting, instead sitting in the stands wearing a mask. After taking part in the match, Tahlia wore a mask at the medal ceremony and as she celebrated gold with her teammates on the podium, where she had her arms around Beth Mooney and Alana King.

She is understood to be the first player known to have Covid to take part in an international cricket match, with Birmingham allowing each positive athlete to be assessed on a case-by-case basis.

But critics have said she should not have been allowed to play. Many Indian supporters felt the decision was ‘racist’ and that India would have been ruled out of the final if the shoe was on the other foot. There was also anger because Indian para discus athlete Aneesh Kumar Pillai was banned from his Commonwealth final in Birmingham after testing positive for COVID-19. The virus was picked up by a random swab – and he was asymptomatic – but the Commonwealth Games Federation said he couldn’t take part.

There were also claims of hypocrisy by the Australians, given their very hard line on lockdowns and vaccination to slow the spread. Their strict rules led to Novak Djokovic being excluded from the Australian Open tennis and deported – despite him not having COVID-19. Former prime minister Scott Morrison even spent $2 billion of taxpayers’ money on quarantine facilities now scattered around Australia that sit unused and empty.

“If we get Covid, so be it.” Ah, the forbidden words that would have saved the world so much trouble.