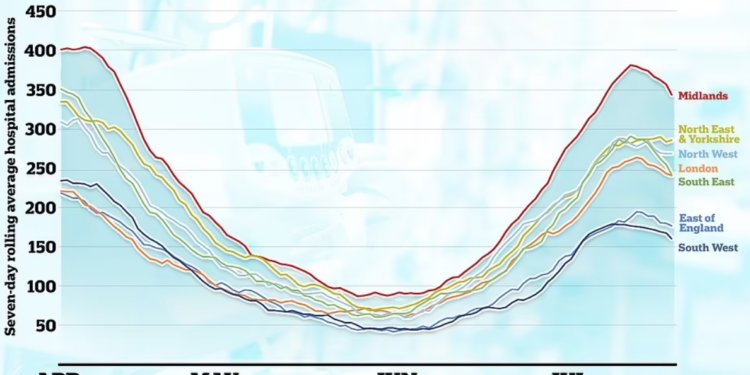 England’s latest Covid outbreak was slowing down a fortnight ago, according to official data from the ONS, as it once again peaks without masks or restrictions. MailOnline has more,

Analysts behind the country’s most trusted surveillance project, ran by the Office for National Statistics, estimate 3.14 million people were infected on July 13th – up only 9% on the previous week’s estimate. For comparison, the surge logged last Friday was roughly a third.

Cautious statisticians said it’s “too early to say” if the wave is peaking. But public health experts claimed the worst is likely over, given that the mass-testing survey is “always two or three weeks behind the epidemic curve”.

Despite the positive signs, some scientists have urged ministers to reintroduce mask mandates and working from home rules. Others have even raised the prospect of limits on social gatherings, similar to harsh policies adopted during the darkest spell of the pandemic.

Professor Paul Hunter, an infectious disease expert at the University of East Anglia, said: “It is worth restating that the ONS infection survey primarily publishes prevalence of Covid – the proportion of the population of people testing positive – and a week or more later than the samples were taken on which the results are based.

“Because people can remain positive for about 11 days after becoming positive for Covid, it is always about two to three weeks behind the epidemic curve, as far as new infections are concerned.

“Other sources have suggested that for England the number of new infections peaked around the July 8th to 10th and are now in decline.

“The suggestion new infections are indeed now falling is further supported by the fact new hospital admissions are also now falling, though I suspect the next couple of days’ data may be confused by increased hospitalisations because of the heat wave.”

British Conservatives Can Learn From the Success of their American Counterparts