Reported Infections Down 10% – But ONS Reports Prevalence at Record High 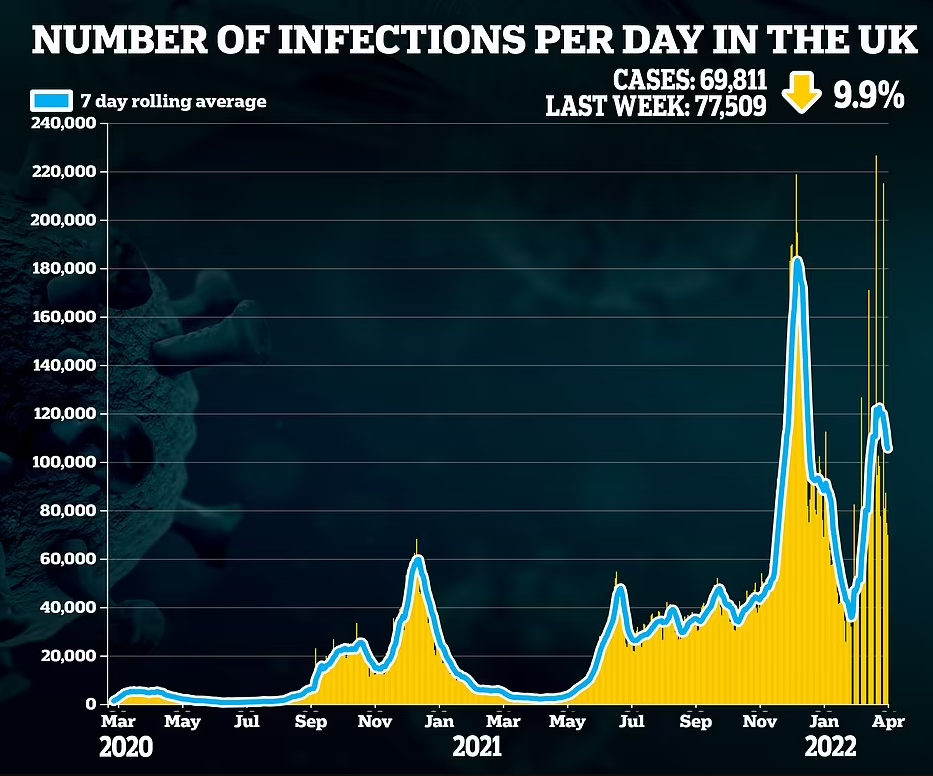 Britain’s daily reported Covid infections have now fallen for five days in a row, despite warnings from the ONS that the virus last week was more prevalent than ever. MailOnline has more.

Government dashboard data showed another 69,811 infections were logged in the last 24 hours, which was down 9% on last Friday.

Deaths continued to rise, however, with 191 recorded today – up 11% on the same time last week. Another 2,509 hospitalisations with the virus were also recorded on March 28th, the latest date available, up 12% in a week and the most since late December at the height of the Omicron wave.

But both are lagging indicators, because of the time it takes for someone who catches the virus to fall seriously ill.

The drop-off in cases follows from the Office for National Statistics (ONS) estimating that 4.1 million people had the virus on any given day in England last week, the equivalent to one in 13 being infected.

The figure is the highest ever recorded – topping the previous peak of 3.7m at the height of the Omicron wave in January. It is also 18% higher than last week.

In the most Covid-ridden towns of Bournemouth, Poole and Christchurch, one in nine people were projected to have the virus in the week to March 26th. And infections have soared to pandemic highs in all over-35s.

Britain’s outbreak as a whole is also bigger than ever, with 4.9m now thought to be infected – up from 4.3m last week.

Despite the mass testing project warning that cases show no signs of slowing yet, top scientists are hopeful that the worst may be over. Official numbers – reliant on people getting tested, as opposed to random swabbing – have been falling for a week, bolstering hopes that the virus was running out of steam.

Panic has set in (or been confected) in the usual quarters, but the truth is the Omicron BA.2 surge, like those before it, has peaked by itself, despite restrictions being lifted. As the Danish Government concluded in January, this is not a socially critical disease that warrants any infringements of liberty.