The Tyranny of the Risk Averse 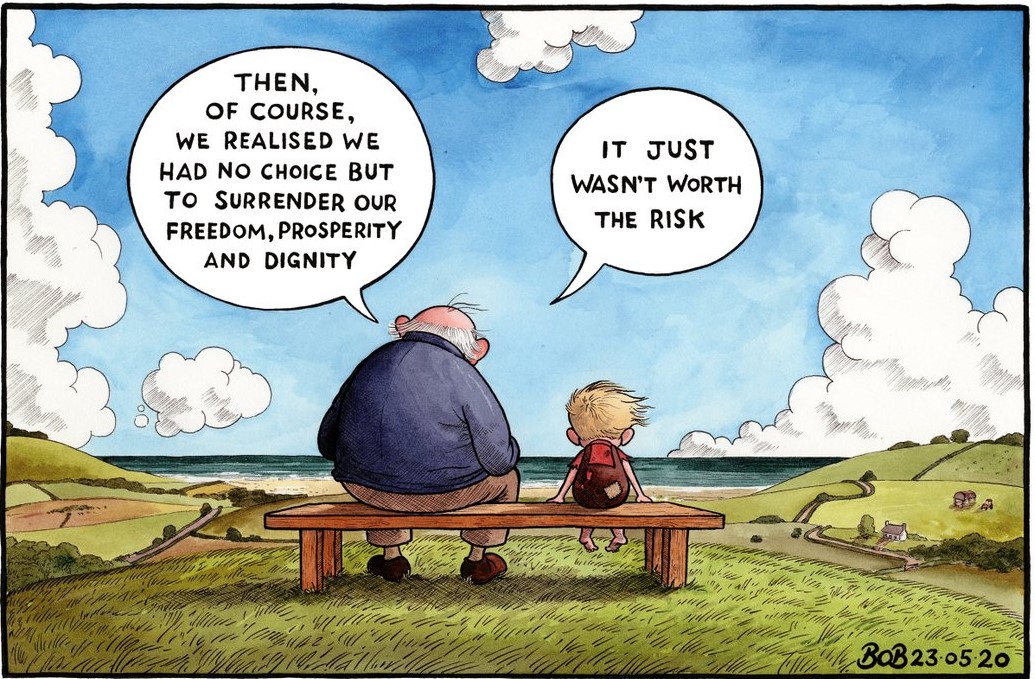 We’re publishing a guest essay today by Nick Comilla, a writer based in New York, about why so many apparently sensible, intelligent people have embraced the restrictions on their freedoms that states have imposed the world over. He thinks a clue may be found in the work of psychologist Sarah Schulman, who writes about why students seek emotional safety rather than stimulating debate on campus and why victimhood has become so appealing. In a nutshell, this is Nick’s hypothesis: “Quite simply, it seems to me that the Covid hysterics are taking up the mantle of victimhood and then construing any resistance to their pathology as abuse, when really it’s the opposite.” Here is an extract:

Last winter, a familiar refrain I noticed in New York amongst myself and many others was “stay safe”. It became the new “have a good night”, it was instinctual and communal. I even started saying it without realising it. It is meant as a compassionate slogan, but it’s also an imperative. You’re being told to do something: stay safe, which suggests the possibility of danger or threat. But why were we suddenly all saying that to each other? I chalked it up to the strangeness of those times: a new ‘Covid wave’, extreme uncertainty, the city still felt emptied out, and crime was up. “Stay safe” and the little things we could do for each other were like linguistic pacifiers, offering us a reprieve from the endless media reminder that we were in ‘unprecedented’ and ‘uncertain times’ and that, despite this, we were ‘all in this together‘.

I started to think about the other phrases that encapsulate an overabundance of caution which masquerades as compassion. And at what point does overemphasising caution become its own form of harassment? Certainly, we are seeing rising incidents of shunning and neuroticism since the start of the pandemic. These are notions favoured by the laptop-class: people who want to live in March 2020 in perpetuity, clamouring for more lockdowns and ‘stimulus’. Some people in the United States seem convinced – quite literally – that they are going to die. This is a problem. They perceive themselves as being in great danger when they aren’t, and view others as a threat in an overstated way. This is dangerous. I noticed that they also seem to take a strange sort of glee in telling others what to do – adult hallway monitors run amok. There was something fundamentally pathological about the sheer pleasure people – usually women and men who seemed off the deep end into over-socialisation – took in events being cancelled for ‘the greater good’. When LCD Soundsystem announced, due to public pressure, that they were abruptly cancelling the last three shows of their reunion performance here in NYC everyone started talking about ‘the greater good’. Those who voiced their disappointment in various comment sections were ostracised, while those who were sanctimoniously, righteously having their ‘concern for safety’ met seemed pleased to have their virtue reaffirmed. To be clear, I don’t necessarily think they enjoy the ongoing restrictions: I think they enjoy the righteousness of their perceived sacrifice.

The chorus they kept repeating was ‘this was a tough call, but it’s the right thing to do!’ and ‘see you when it’s safe’. The issue is that for these people, it will never be safe. And they are holding the rest of us hostage in the meantime. What struck me as odd was that if anyone dared to complain about this over-zealous and overstated concept of risk, if anyone pointed out that these people were beginning to make life seriously miserable, the neurotics would double down and accuse us of that which they were guilty of: ‘Stop throwing a fit’, ‘Oh poor you, little baby, you can’t go to a concert’. Sadomasochistic glee. Anyone who has spoken out against restrictions knows that the social ostracising is rampant: you’re either accused of ‘lacking empathy’ or of actively ‘wanting people to die’. It is bizarre to me that a civil conversation can’t be entered into under the shared assumption that neither of us want people to die and that you can be simultaneously against lockdowns and in favour of reducing suffering in general.