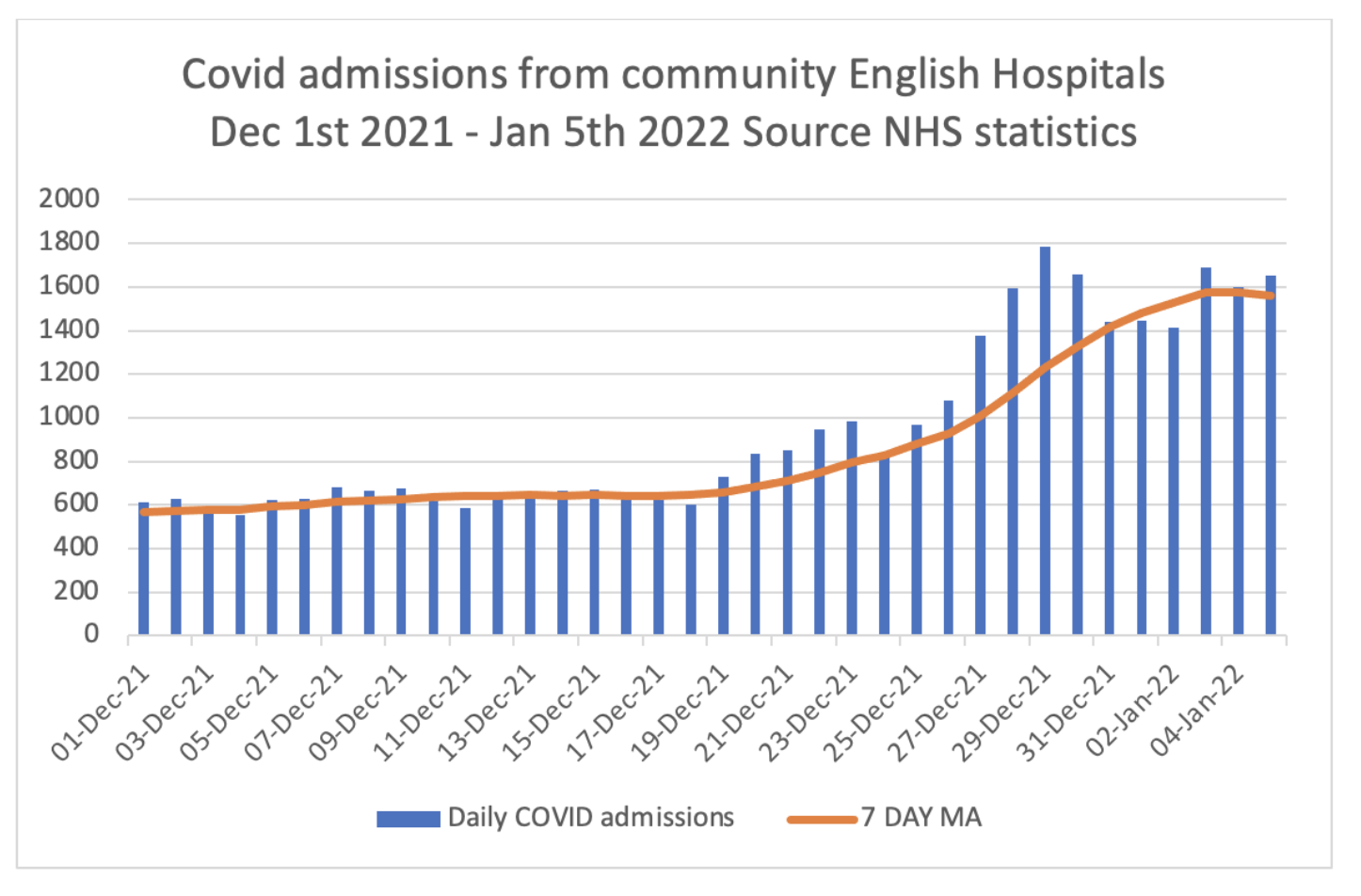 We’re publishing the latest update from our in-house doctor, who’s pored over the latest NHS England and ICNARC data packets so you don’t have to. Contrary to some hysterical reports in the media yesterday, it’s actually good news. Community admissions for Covid are falling in London and tailing off across England – and of those classified as being in hospital ‘due to Covid’, 40% were admitted for something else and only have Covid incidentally.

When I was a medical student, a novel called The House of God was required reading. It relates the experience of the fictional American Dr. Roy Basch in his first year as a qualified doctor. The book contained lots of good advice for surviving the junior doctor ordeal including several ‘Rules of the House’. Rule 13 states: “The delivery of good medical care is to do as much nothing as possible.”

Surprisingly often in medicine, doing nothing is the best option. One of my former mentors frequently advised me to “do as little as possible for as long as possible” – his point being that over-hasty intervention is not just unnecessary, but can be actively damaging. This transgresses a key principle of medicine Primum, non nocere – first, do no harm.

Having looked at lots of data from multiple sources over the last few weeks, I am coming to the view that the entire country would be better off in almost every way if doctors stopped ‘doing things’ for a while – particularly if they stopped testing asymptomatic people for the variant du jour.

I will discuss the available information and explain why I have arrived at that conclusion.

Firstly, the admissions from the community in London (as the leading edge of the Omicron wave).

Graph 1 shows the daily Covid admissions from the community in the blue bars vs the same time last year on the brown line. Readers will recall that Professor Sir Chris Whitty warned at the Downing St press conference on December 15th that a big increase in Covid hospital admissions after Christmas was “nailed on”.

It looks like we are waiting for Godot, because the numbers are actually falling, not rising and are currently less than a third of levels a year ago.

Graph Two shows the same metric for the whole of England. On this graph the bars represent daily admissions, the brown line the seven-day moving average. Again, admissions to hospital from the community are tailing off.

This is not really surprising as the ONS data for community infections shows that London appears to be well past the peak. The same pattern is also seen in the ZOE app reports. Other regions are now showing rising positive tests for Omicron – and it is likely that regional waves will peak and decline rapidly, as in the capital. Rather oddly, the data for Wales seem to show much higher community spread of Omicron than in England, despite far more stringent social restrictions. Could it be that Mark Drakeford’s draconian rules aren’t flattening the curve? Whatever next?

On Thursday/Friday the NHS release a weekly summary with hospital level data and the Primary Diagnosis spreadsheet. Graph Three shows the Primary diagnosis data for English hospitals – a busy graph, so I will explain it. The vertical bars represent patients testing positive for Covid (orange) and patients being ill from Covid in hospital (blue). The difference between the two is the number of patients with ‘incidental Covid’ – in other words, they’ve tested positive but that’s not the reason they’re in hospital.

It can clearly be seen that the ratio between the two on the gray line is falling quickly – in other words, only 60% of the total patients reported as in hospital ‘due to Covid’ have actually been hospitalised because they’ve got Covid. Fully 40% of the patients in the reported totals have Covid as an incidental condition. In the Midlands, 45% of patients have ‘incidental Covid’. I expect the proportion of incidental findings will increase in coming weeks. I will return to this point later in support of my contention that we need to rapidly scale back testing.

The weekly hospital update is often quite dull. Not so this week. For a few weeks now it has been apparent that hospitals in the East and South East of London have had higher admission numbers from the community than other parts of the capital. These numbers are now plateauing. However, the total Covid inpatient burden is much more evenly spread across the London hospitals. I think this indicates a serious issue with in-hospital spread of the virus (not surprising), although the significance is much less than in prior waves, because Omicron really is less severe than previous variants.

Exactly how much less severe is not possible to say because the NHS will not release key pieces of information around length of stay and oxygen utilisation in hospitals. Patients who are not very ill with Omicron do not need supplemental oxygen – it would be easy to compare current oxygen utilisation rates with those from a year ago to assess relative severity of Omicron vs the Alpha variant.

The Spectator calculates that average length of stay has fallen from 8 days to 5 days – anecdotally I hear it is closer to 3 days. Admissions to ICU are flat and not substantially above normal for January, as are death rates. Cases of influenza, respiratory syncytial virus and community acquired pneumonia are all substantially below expected levels for this time of year.

Unfortunately, the latest ICU ICNARC report does not provide information around how many people have been admitted to ICU with Omicron vs Delta. I expect this information will emerge in time. It is certainly already known. Although absence of evidence is not evidence of absence, it is a reasonable assumption that if most of the current ICU admissions were positive for Omicron, the BBC would be broadcasting that fact on an hourly basis. So far, that dog hasn’t barked – I am not expecting to hear it.

Given all the evidence that Omicron is a variant of the common cold and that admissions of moderately unwell people seem to have peaked already in London, why is the NHS under so much pressure?

There are three main reasons. The first is the policy of sending staff home for extended periods of time based on positive lateral flow tests irrespective of whether they have symptoms.

The second is the incredible degree of ‘organisational friction’ in segregating patients on Covid wards and the arcane rules around testing prior to surgery.

The third is the difficulty discharging patients from hospital – so called ‘bed blocking’.

The first two factors are attempts to limit the spread of Omicron. The available data shows the futility of that approach. Omicron is so transmissible, eventually everyone in the country will be exposed to it – yet only a tiny proportion of people will experience serious illness – very much like the common cold. If persistent testing of asymptomatic people stopped tomorrow, a substantial number of problems currently besetting the NHS would vanish overnight. To quote Rule 10 of The House of God: “If you don’t take a temperature, you can’t find a fever.”

I have come to the view that we are making mistakes in management of the pandemic that will damage the country for years to come. Much of these mistakes stem from testing asymptomatic people for a disease which is highly unlikely to do them any harm.

I close with a well-known limerick, which contains good advice for our times: “Dr Bell fell down a well, and broke his collar bone. Doctors should attend the sick, and leave the well alone.”

End Covid Vaccination of Children Because the Risks Outweigh the Benefits, Government Told By MPs and Scientists