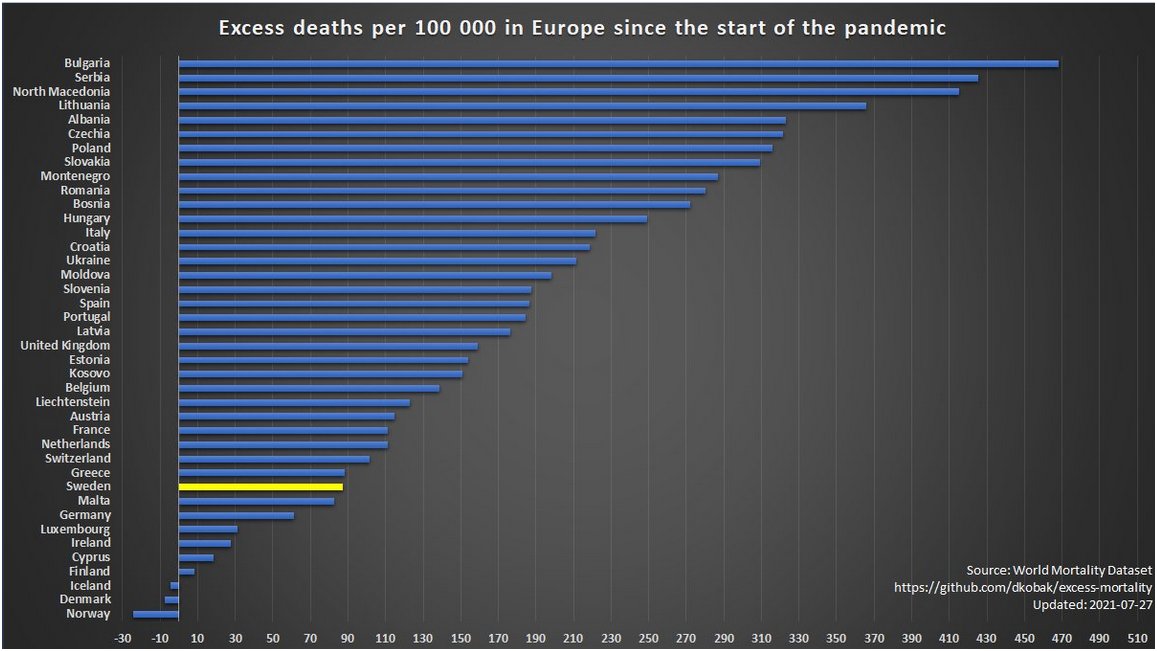 There follows a guest post by a subeditor and long-time Daily Sceptic reader who is keeping his identity anonymous. He has spotted that spectacular healthcare spending and impressive vaccination rates have not brought the U.K. obvious rewards against Covid. (Sweden is highlighted in the graph above because, by imposing the fewest restrictions, it is the closest Europe has to a control.)

Recent figures for European countries from the World Mortality Dataset, depicted in the graph above, reveal that island nations have fared particularly well during the pandemic: Iceland, Cyprus, Ireland and Malta have all recorded low levels of excess deaths. However, there is one noteworthy exception – the U.K.

In fact, even the third poorest country in Europe, Kosovo, riven by war in the late 1990s, and only an independent state since 2008, has performed better. This is despite the Balkan country having, per capita, a fraction of our health service facilities, staff and expertise.

The double-vaccination rate in Kosovo, currently 30% of the population, is a long way behind the U.K. on 66%.

Excess mortality is widely regarded as the best measure of a country’s success in coping with a prolonged health crisis, such as a bad flu season, as it allows for differing evaluations of the causes of death, notably whether they have been ‘with’ or ‘of’ Covid, and disregards arbitrary time limits, such as within 28 days of a positive PCR test. All other deaths, such as those brought on by lockdown measures, are also, of course, included in these statistics.

This evidence shows that spending billions of pounds above normal on health services and staff, and enticing a large proportion of a population to get vaccinated, do not necessarily correlate with a lower number of deaths.