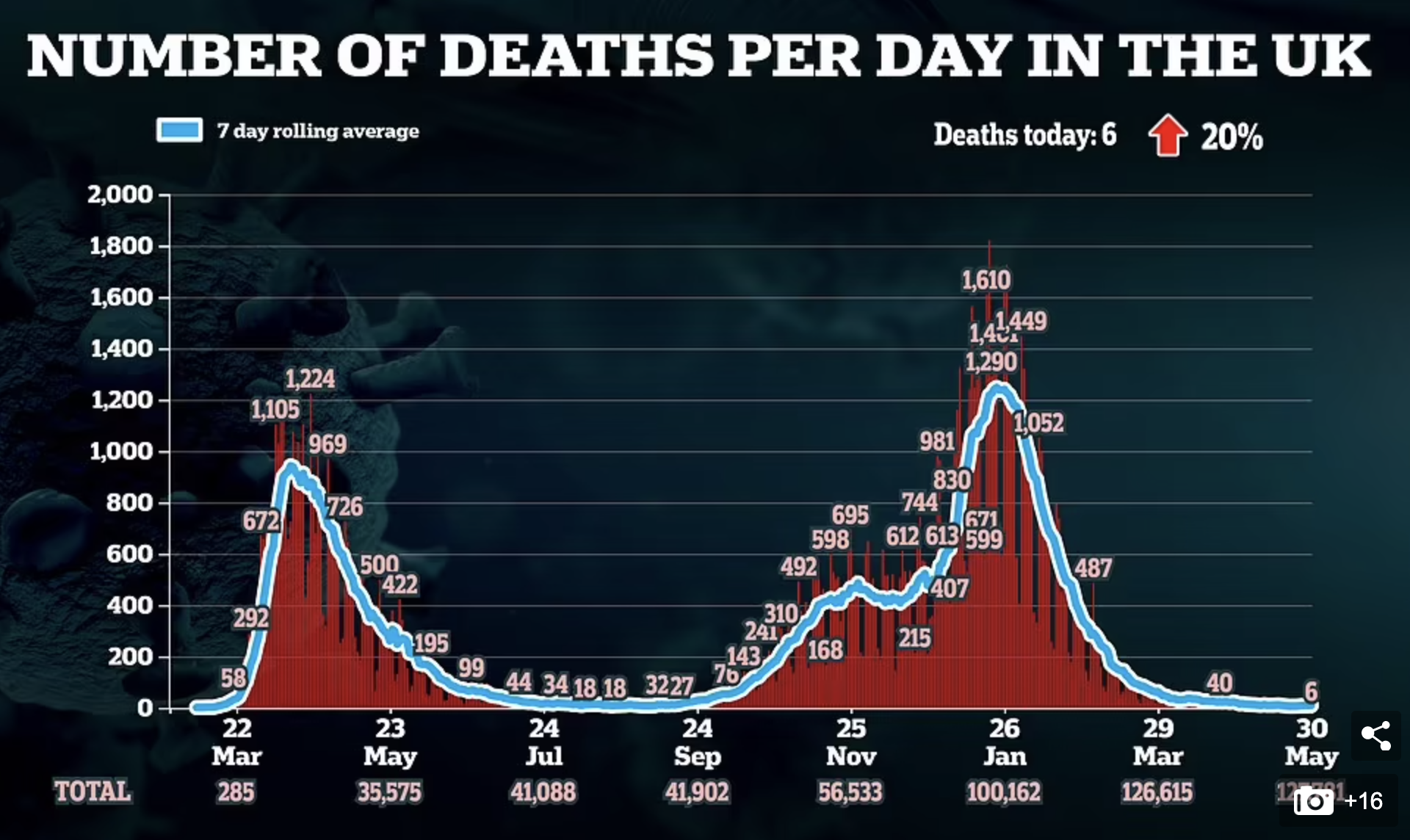 There’s a depressing report in MailOnline. A Downing Street source says there’s a 50:50 chance stage four of the roadmap could be delayed, pending more data about the spread of the Indian variant. Not surprisingly, the pressure to delay is coming from various members of SAGE.

A Government minister today acknowledged England’s June 21st Freedom Day could be in jeopardy after a number of SAGE scientists publicly called for the end of restrictions to be pushed back.

During a round of interviews this morning, Environment Secretary George Eustice said the Government couldn’t “rule anything out” when asked if the next phase of the roadmap could be delayed or watered down.

He insisted a decision would be made in a fortnight’s time when ministers will know more about the effect of the Indian strain – which is making up three-quarters of all new infections – on hospital rates.

The comments mark a significant shift in tone from No10, with ministers claiming just days ago there was no reason to deviate from the lockdown-ending plan. The remarks come after several high profile SAGE experts and Government advisers today lobbied for the June 21st easing to be moved.

Professor Ravi Gupta, who sits on the Nervtag subgroup of SAGE, urged the Government to push back the unlocking by “a few weeks” to allow more people to get vaccinated before ditching all social distancing rules.

The Cambridge University expert claimed there were early signs the third wave had already begun – after daily infections breached 4,000 on Friday for the first time in nearly two months – and warned it could become ‘quite explosive’ over the next few months.

Professor Gupta said the jab rollout was giving people a “false sense of security” because infection rates were still relatively low, but claimed it was inevitable unvaccinated people would eventually start to fall ill with the highly infectious strain.

The roaring success of the vaccine programme has seen almost 40million adults given at least one dose of the jab and 25million fully inoculated. But it leaves more than 5million Britons over 50 either unvaccinated or only partially protected.

Professor Gupta’s comments were echoed by SAGE professor Susan Michie, who warned Britain was on a “knife-edge” as it approached the June 21st deadline. The University College London behavioural scientist, who sits on the SPI-B committee, said said [sic] fully opening the country as planned could lead to a serious spike akin to the second wave in the winter.

“Either it could run away as it did before Christmas, which would be extremely serious and we’d have more restrictions, or it could be contained,” she told Sky News.

Professor Adam Finn, a member of the panel which advises No10 on its Covid vaccine rollout, also urged ministers to be “cautious” amid rising cases. He said the impact of May’s lockdown easings on Covid cases – which saw restaurants allowed to serve indoors and Britons able to invite up to six others into their homes – would not be clear for another two to three weeks.

Let’s hope Boris sticks to his guns – for once. After all, only six people were reported as dying from COVID-19 yesterday. Worth reading in full.

Stop Press: The Times has written up Professor Rav Gupta’s interview on the Today programme in which he warns of a third wave.

Stop Press 2: Just one Covid death has been reported today and, according to the Spectator, “England is currently running below SAGE’s best case scenario for hospitalisations following the restriction relaxations”.