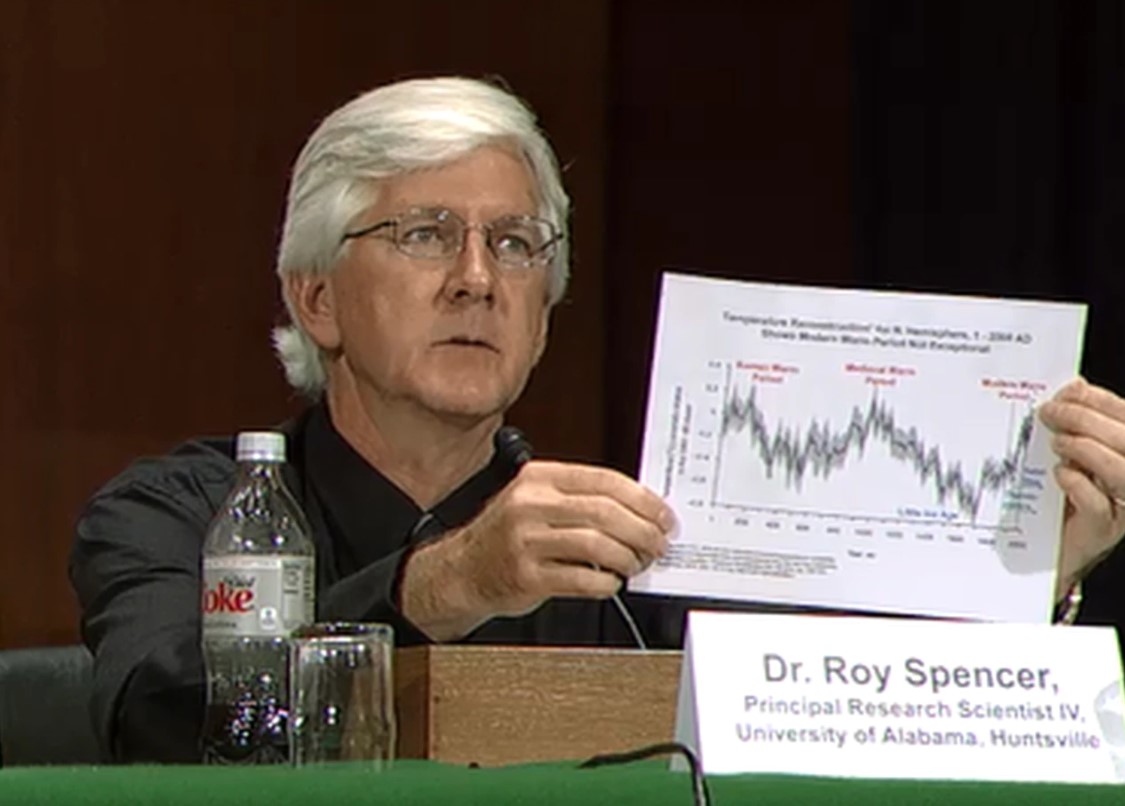 Dr. Spencer, who states that he believes most global warming “is probably due to greenhouse gas emissions” has collated data from NASA satellites for 43 years. Along with his colleague, the atmospheric scientist Professor John Christy, he has received awards for his work from NASA and the American Meteorological Society. Commenting on Google’s “unreliable and harmful claims” suggestion, Dr. Spencer notes: “This is obviously because some activists employed by Google don’t like the answer our 43-year long satellite database gives.” Google is on record as stating that it will ban all sites that are sceptical of “well established scientific consensus”.

The issue with satellite data is that it shows less global warming than the frequently quoted surface measurements. This has long been a thorn in the side of green activists promoting the Net Zero agenda with hysterical fears that the planet is heading for catastrophic heating caused by the burning of fossil fuels. But surface measurements suffer from many disadvantages, not least the effect of massive urban heat distortions caused by the growth of cities across the globe over the last 70 years. Nevertheless, the higher surface measurements are used to provide covering fire for the guesses made by climate models that forecast future warming up to 6°C. Over the last 40 years, none of these models has even provided an accurate guess.

The lack of global warming since the mid-1990s is shown by a graph produced by satellite data specialist Remote Sensing Systems. Apart from a large spike in 2016 caused by an exceptional warm El Nino natural weather oscillation, there has been no significant warming for nearly two decades. Current annual temperatures were seen in the 1980s and 90s. These two decades saw a rise in temperatures after the falls from 1940-80 and provided much of the ammunition still being used by Net Zero zealots to promote the idea of global heating and climate breakdown. Meanwhile the graph overlays the results of climate model guesses and shows clearly how they doubled-down and became more extreme as the actual temperature flatlined.

The main surface temperature database used by the IPCC and scientists across the world is HadCRUT run by the U.K. Met Office Hadley Centre and the Climate Research Unit at the University of East Anglia (UEA). In 2018, the climate researcher John McLean examined the fourth version of HadCRUT in considerable detail to gain a PhD at James Cook University. His overall findings included: “[S]imple issues of obviously erroneous data, glossed-over sparsity of data, significant but questionable assumptions and temperature data that has been incorrectly adjusted in a way that exaggerates warming.”

For example, McLean noted simple errors such as a station reporting an average December monthly temperature on a Caribbean island of 0°C and a gauge in Romania suggesting a September average of -45°C. A town in Columbia spent three months in 1978 with an average temperature of over 80°C. Some ships reported sea temperatures in locations 80km inland.

Data sparsity was a real problem. The database starts in 1850, but after five years just three stations were reporting data for the whole of the southern hemisphere. The author noted that results from the southern hemisphere are crucial in determining global averages, but 50% of the area wasn’t covered until 1950. One implication of this lack of data, says the author, is that any international agreement to limit global warming to 1.5°C that uses HadCRUT data averages from 1859-99 as indicative of pre-industrial temperatures is “fatally flawed”.

Having spent years examining the data, the opinion of the author was that HadCRUT4, and any reports or claims based on it, “do not form a credible basis for government policy on climate or for international agreements about supposed causes of climate change”.

In 2020, the Met Office and UEA issued a fifth version of HadCRUT. They said they had improved the use of marine instruments and “for the first time” used “statistical methods to provide improved analysis in data sparse areas”. Perhaps to nobody’s great surprise: “[T]he overall warming from the start of the record is slightly larger than was estimated from HadCRUT version 4.”

Temperature data is a vital political tool in the battle to push the Net Zero agenda. It is interesting to note that the Climate Research Unit at UEA was at the centre of the Climategate scandal of 2009, when the considerable warming of medieval times and the subsequent significant cooling were mysteriously erased in the infamous IPCC temperature hockey stick. Over 1,000 years, this just left a sudden recent temperature rise which was attributed to human causes.

Of course, satellite temperature data would be widely quoted in the mainstream media if it provided the politically correct narrative. It was therefore intriguing to note the claim made earlier this week on the BBC of the latest findings of the Copernicus Climate Change Service. “The past seven years have been the hottest on record, according to new data from the EU’s satellite system”, reported the BBC. Interestingly, the BBC at print, also known as the Guardian, published the same story attributing the obligatory record rise – correctly – to surface measurements.

Unsurprisingly, so did the Copernicus press release and report. The BBC’s misinformation is still, as of this writing, uncorrected.

Finnish Epidemiologist: The IFR of the Omicron Variant is 0.04%, About Half That of Seasonal Flu