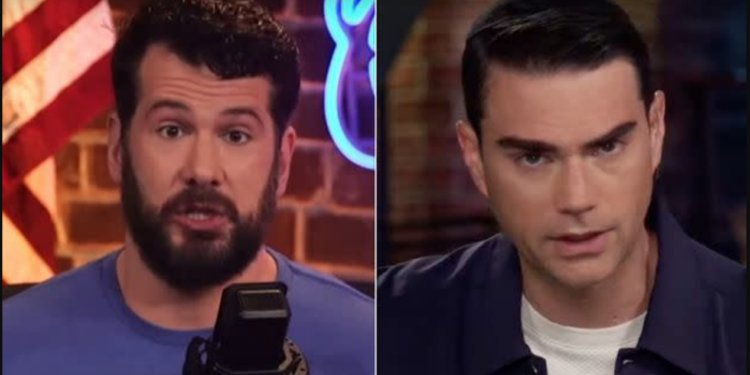 If you’re a fan of overpaid American alternative media celebrities, you may have been following the recent s***storm between Steve Crowder and the Daily Wire.

If not, basically Daily Wire offered Crowder a $50 million contract over four years – technically a ‘term sheet’, rather than a formal contract, intended as an initial offer. Crowder rejected this paltry offer, and did it very publicly, claiming that said terms represented a capitulation to Big Tech, and the enslavement of all future conservative creators.

To British ears, the idea of getting 50 million of anything sounds almost beyond belief. But having once been engaged to an American, I can confirm they simply expect a higher standard of living. Confronted with, for example, a normal English hotel room, they immediately ask for an upgrade for no reason other than they ‘don’t like it’. And, shockingly, they usually get it. If British people knew this, the entire system would collapse. Our country relies on mild self-loathing and an almost pathological reluctance to ‘bother’ anyone. However, I digress.

Crowder did not mention the Daily Wire by name in his original YouTube video on the subject, but it was obvious to anyone who follows this stuff that he meant them. Daily Wire founder Jeremy Boreing then ‘owned it’ by fessing up to the appalling $50m offer, and painstakingly going through the contract line by line to explain why he felt it was totally reasonable.

Crucially, Crowder had left out the $50m part, perhaps to garner more sympathy for his plight, or perhaps because it’s extra cool for other people to talk about your $50m offer that you didn’t even bother to mention. Seems like something that’s probably in one of Trump’s books.

Yet Crowder maintains money was never the issue. If we take him at his word, for him it’s about performers retaining control of their content and careers, and not working in league with Big Tech. The latter concerns the fairly aggressive punitive clauses in the contract, whereby if the creator is demonetised by YouTube, Spotify, etc., they lose a large chunk of their fee. He maintains that if a personality like him is under a contractual obligation not to be suspended or shadow-banned by a big platform like YouTube, he will be forced to self-censor – and that means not expressing any conservative views.

The Daily Wire’s counter-argument is that if they stand to lose a huge amount of money from being slapped down by Big Tech, of course they have to protect themselves. Crowder’s claim is that this plays into the hands of those who seek to boycott conservatives (which, as someone who works for a company still struggling to get advertising due to the wretched dweebs at Stop Funding Hate, I can understand).

While Crower’s basic claim sounds reasonable, where he went wrong is in virtually all of his behaviour.

Firstly, he appears to have registered the domain for his own new project, StopBigCon.com, weeks before launching this attack. He then phoned Jeremy Boreing, ostensibly to talk about the contract, but apparently in order to force some kind of confession out of Boreing, as Crowder recorded the call and has now released extracts of it on his YouTube channel.

To me, that immediately ends all claims to moral superiority.

And if Candace Owens is to be believed, the story is even more sordid. She claims Crowder felt the initial offer was a financial insult, prompting him to make a counter offer of $120m. This was deeper than even the Wire’s deep-assed pockets, so they flatly rejected it. Crowder went off in a sulk, then decided to take on the Daily Wire with his own scheme. Hence the recorded phone call and the YouTube videos – all part of the plan to launch Stop Big Con.

In other words, a vengeful and entirely self-serving ego trip from Crowder, covered up with the pompous narrative that he is doing it all for the kidz.

I have to say I find that narrative quite compelling. Especially given Crowder’s questionable character. Aside from recent events, he is said to have treated staff pretty badly in the past, especially former employee ‘Not Gay Jared’, who was forced to sign a non-disclosure agreement.

Not that I’m a massive fan of Ben Shapiro either, but more for some of his opinions than his personal relationships, which I know nothing about. Obviously I cite Shapiro because, as co-founder and the platform’s most famous host, he is synonymous with the Daily Wire brand. Shapiro had some choice words for his old friend Crowder by way of reply to the latter’s airing of the dirty, if remarkably expensive, laundry, calling it a despicable betrayal.

My personal favourite Daily Wire host is Michael Knowles, who has stayed pretty quiet on the whole thing, except for one modest tweet supporting Boreing, and one Dante analogy. Matt Walsh, who also does some great work, has been less restrained.

But despite the robust defence from team Wire, many are siding with Crowder against his evil alt. media would-be overlords. And Crowder perhaps has a point about Big Tech. The Daily Wire’s model is arguably flawed, since it relies on sworn enemies like YouTube to provide revenue. Then again, it is not that surprising Daily Wire would wish to offset their losses if one of their presenters has a big change in fortune. Plus, though he is demonitised, Crowder himself uses YouTube – for example, to make the very videos attacking the Daily Wire. The trick is to do some things on YouTube, then send people towards your premium content, which Crowder also already does.

Plus, as Candace Owens pointed out, Crowder could have just challenged any terms in the document that he didn’t like, which is exactly what she did, in a several month long negotiation. Jordan Peterson’s daughter has since revealed Peterson did the same, and came out with an extremely favourable deal.

So. Is Crowder freedom fighter, or narcissist bully and amateur spy? Are the Daily Wire shrewd but empowering business people, or evil oppressors of talent?

I lean towards the Wire on this one, if only because of Crowder’s appalling behaviour recording and releasing the phone call.

As for the contract, I can’t say for sure if I would be able to walk away from $50 million. But I would love the opportunity to find out.

Nick Dixon is Deputy Editor of the Daily Sceptic. You can follow him on Twitter and Substack.