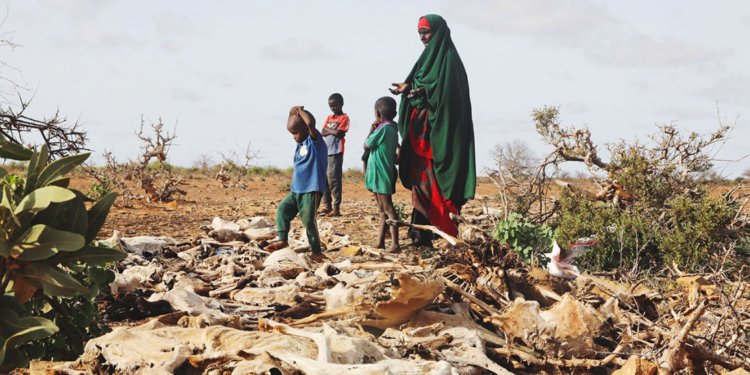 Yet again we’re told that the population of Somalia is threatened by drought and starvation. Almost seven million of the east African nation’s population of 17 million are facing acute food shortages. And some 1.8 million children are thought to be at risk of malnutrition, according to the United Nations. It has been reported that six Somali children have written an open letter to world leaders calling for action on climate change to end the drought ravaging their country.

I don’t mean to be hard-hearted, but as long as I can remember there have been droughts and food crises in Somalia.

So let’s briefly check whether the latest drought actually has been caused by anthropogenic global warming or climate change or the climate crisis or whatever it’s called this month.

Here’s a chart of rainfall in Somalia.

There really doesn’t seem to be much of a correlation between Somalia’s rainfall and atmospheric CO2 levels. In fact, at a quick glance one might get the impression that Somalia’s rainfall has been consistently above average since around 2000.

So, if it’s not human-caused global warming which has led to so many Somalis being in danger of starvation, what else could be the reason? We could look at the size of Somalia’s population. After all, you wouldn’t expect the population of a country hit by so many droughts to grow very fast.

Until about the 1940s, Somalia’s population was relatively stable at just under two million. In the last 80 years, it has shot up to around 17 million and by 2050 will probably be close to 40 million.

So, the question we can all ponder is: what is really causing drought, poverty and starvation in Somalia? Is it a supposed lack of rainfall due to rising atmospheric CO2 levels, as the climate catastrophists and the mainstream media keep claiming? Or could it have something to do with the fact that the country simply can’t support its fast-growing population?

I think I know the answer. But no doubt our useless Government will give hundreds of millions of our money to Somalia’s lucky rulers for ‘climate reparations’ to apologise for us supposedly causing the seemingly never-ending series of droughts and famines in Somalia.

Unfortunately, facts seem irrelevant when it comes to the climate catastrophist cult.

The Labour Party Has a Woman Problem