Green Movement is Not About Planetary Crisis, “But a Crisis of Meaning for the Affluent” 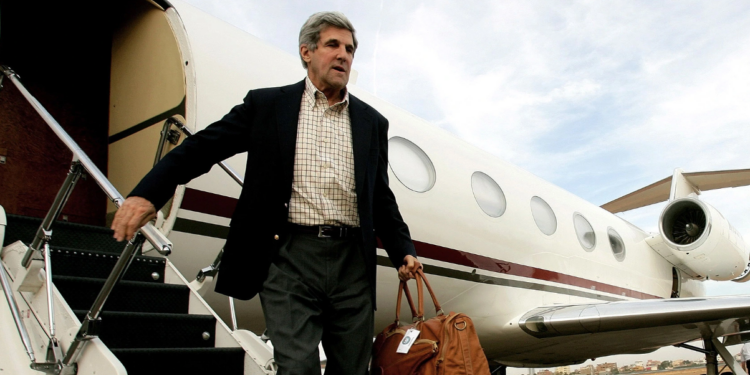 Climate activism isn’t about the planet – it’s about the boredom of the bourgeoisie, says Ralph Schoellhammer, an Assistant Economics and Politics Professor at Webster University in Vienna. Writing recently in the U.S. magazine Newsweek, he observed that the green movement was not a reflection of planetary crisis, “but rather a crisis of meaning for the affluent”.

Referring to a recent interview on CBS 60 Minutes with the veteran professional doom-monger Paul Ehrlich, a man who assured us that England would no longer exist by the year 2000, Schoellhammer noted that like some religious prophets he was not there to explain the world. Instead, Ehrlich was there to “reinforce the upper class’s favourite worldview of the imminent end of the world, something that can only be prevented if we fundamentally change the way we live”.

By “we”, the author suggests, they actually mean “you”. He notes the example of the U.S. climate envoy John Kerry, who flew to a climate conference in 2019 using his family-owned private jet. Kerry said it was the “only choice” for someone like me “to win this battle against climate change”. Of course any number of virtue-signalling celebs could be hoisted on such a petard of their own making. In 2009, Prince Charles declared the age of consumerism and convenience was over, although recent additions to his palace portfolio upon accession to the throne might indicate his thoughts don’t apply to himself.

Why is Ehrlich, whose most famous book The Population Bomb predicted hundreds of millions of people would starve to death by the 1980s, still treated as a modern oracle, asks Schoellhammer. The best answer, he suggests, lies with the New York Congresswoman Alexandria Ocasio-Cortez, who said on being elected in 2019: “I think that there’s a lot of people more concerned about being precisely, factually and semantically correct than about being morally right.” In other words, Schoellhammer interpreted, no matter what nonsense one spews, as long as it is ‘morally right’, it does not matter what the facts show.

Such thinking is now rife through the public sector, academia and the media in the industrialised world. It was recently disclosed that a Washington state school science curriculum had instructed teachers to focus on “emotions” over “rational thinking”. For too long, science has caused rational thinking to be prioritised. As we delve into climate change, “we must pay attention to our own emotions and those of other people”, it adds. In a world of prosperity and ease almost unimaginable to previous generations, it seems that affluent and bored humans can afford to indulge their guilt-ridden delusions and fantasies.

“Ultimately, attacking rational thinking is just a way to justify policies that are irrational and unscientific,” noted Todd Myers, the Environment Director of the Washington Policy Center think-tank. “It is a recipe for policy based on tantrums rather than data.” In a recent essay for Quadrant, the Australian geologist Professor Ian Plimer laid out a brutal assessment. “We are reaping the rewards of 50 years of dumbing down education,” he charged, adding: “There has been a deliberate attempt to frighten poorly-educated young people about a hypothetical climate emergency by the mainstream media uncritically acting as stenographers for green activists.”

The capture of mainstream media seems complete at all levels. The BBC has long refused to debate climate science on the bone-headed grounds that it is ‘settled’, while its promotion of the Net Zero fantasy could fairly be described as evangelical. At presenter level, the messaging is constantly woven into the narrative. Last Wednesday, for instance, the Radio 4 Today Sports Editor Dan Roan reported the bid by Sir Jim Ratcliffe for Manchester United, and suggested his company Ineos used sport to “soften the company’s image”. Over the last 20 years, Ineos has breathed new life into many businesses considered surplus to requirements by large chemical corporates. In the process, it has saved and created many thousands of jobs in hard-hit areas of the U.K. Its chemical products are vital for the comforts of modern life and range from energy, healthcare sterilising solutions and anti-freeze. Why should it need to “soften its image”? Only Roan can tell us. Dr. Patrick Moore helped found Greenpeace but left it after 15 years when the organisation started demonising entries in the Periodic Table, notably chlorine, an element of considerable abundance.

Schoellhammer is unimpressed with mainstream media, noting the colossal amounts of money now pouring in to promote the climate and Net Zero narrative – to a degree, he states, “that would make the oil industry blush”. At a ‘Climate Action Summit’ in 2018, two dozen billionaire-backed foundations pledged $4 billion for climate change lobbying. Some of them like the Hewlett Foundation, he continued, are directly funding journalists at the Associated Press for ‘climate reporting’, while foundations associated with Packard and Rockefeller families have been backing Covering Climate Now.

The Daily Sceptic investigated CC Now last month, noting that it was in the business of curating a Net Zero public discourse targeting cash-strapped newsrooms, and funded by a vast supply of dark green money. Operating out of the Columbia Journalism Review in New York, it claims to feed over 500 media operations with written stories and climate narratives. Its “partners” in the mainstream media include some of the biggest names in news publishing such as, Reuters, Bloomberg, Agence France-Presse, CBS News, ABC News and MSNBC. There is also a close connection with the U.K. Guardian. “You can’t do better than the Guardian,” is the advice given to journalists trying to attain full climate hysteria.

Schoellhammer argues that contrary to the climate extremists and their virtue signals, the world they are trying to create would be devastating for the poorest people on the planet. The elimination of poverty and the improvement of living conditions is only made possible through access to energy in all forms and the production of fertilisers for food and plastics for medical equipment. Activists seem to have no shred of compassion in their pet projects, he claimed, highlighting child labour in cobalt mines producing material for batteries. Thus he concludes that this isn’t about the planet, but rather the boredom of the bourgeoisie, “and they don’t care who has to pay to alleviate it”.

2022 Was a Normal Year for Mortality in England and Wales