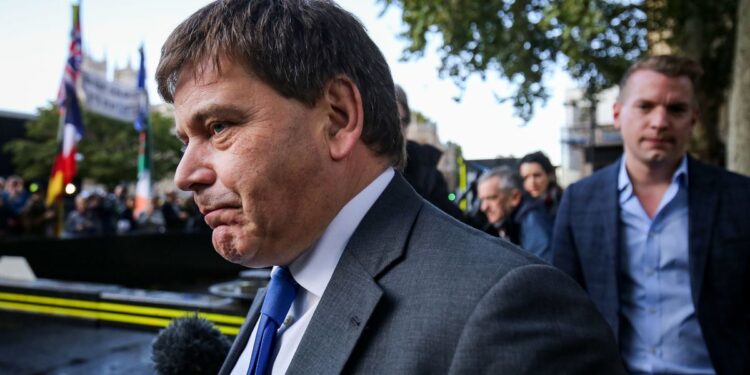 Although I couldn’t resist the headline, I have no intention of adding to the many hit pieces on Andrew Bridgen.

But nor can I completely condone his recent tweet.

Prior to the events of this week, Bridgen had been brave to raise the extremely important issue of vaccine harms in Parliament.

One always assumes politicians are behaving in a largely calculated manner most of the time. But Bridgen’s recent speech on the matter was so brave and borderline reckless that one wonders if he has simply always been acting solely according to his conscience, and this is just the first time it happens to have landed him in this much trouble.

Or, as I suggested in another piece, maybe he has recently taken a hefty dose of red pills. All the signs are there: awareness of vaccine damages, appearing on James Delingpole’s podcast… actually that’s all you need.

Now let’s be clear: in no way was the tweet anti-Semitic. I have this on good authority from my most anti-Semitism-aware friend, who even believes the term ‘Globalism‘ is anti-Semitic, yet conceded Bridgen’s tweet was not. Crass, perhaps. Racist, no.

Nor was Bridgen intending to trivialise the Holocaust. He employed it as an analogy precisely because of its horrific properties. And by calling the global vaccine side-effects scandal the “biggest crime against humanity since the Holocaust” (or, at least, endorsing a cardiologist who made this point) he is seemingly presenting the vaccines as the next worst event.

Still, the details almost don’t matter, because he has already lost.

And by making the ill-advised analogy, my fear is he has ended up undermining the serious cause he was rightly highlighting.

He has given the Guardian the ammunition to bizarrely link him to Andrew Tate, and call for more online censorship off the back of it, and allowed Rishi Sunak, and that ludicrous popinjay Matt Hancock to call him anti-Semitic.

This allows them to crush Covid dissent, bin Bridgen, and move on.

It could be compared to Enoch Powell’s famous “Rivers of Blood” speech, in that it raised a very serious issue that concerns huge numbers of people, but did it in a sufficiently lurid way as to set the argument back catastrophically.

Just as the debate on immigration was buried to the detriment of the country, will the legitimate issue of vaccine harms now be similarly silenced?

It certainly looks that way in the short term, and it reminds us all of the discipline needed when one is on the despised (yet correct) fringe of accepted opinion. Dissident discipline, one might call it.

Lacking this vigilance, Bridgen handed his party the perfect excuse to dump him.

Chief Whip Simon Hart’s statement clearly reflects that. His claim that “Andrew Bridgen has crossed a line, causing great offence in the process”, suggests that the Party’s main concern was raising the issue of vaccine safety, with the Holocaust reference being an offensive aside. The next part confirms this reading:

As a nation we should be very proud of what has been achieved through the vaccine programme. The vaccine is the best defence against Covid that we have. Misinformation about the vaccine causes harm and costs lives. I am therefore removing the whip from Andrew Bridgen with immediate effect, pending a formal investigation.

The idea we should be proud of the vaccine programme is simply an opinion, albeit one that appears to be rigorously enforced. I personally remain impressed by the logistics of the rollout, which could not have been achieved within the EU, but would not go anywhere near the actual product.

Hart goes on to discredit himself with standard Regime terms like ‘misinformation’, and the contemporary authoritarian’s favourite claim: that exposing potential wrongdoing is causing ‘harm’.

I believe Bridgen will be proved right on vaccines in the long term, but his reputation may sadly remain tarnished by the clumsy comparison he made.

In future, let’s maintain our dissident discipline, and not give our glib oppressors any open goals.