Private Eye Called Me a Nazi 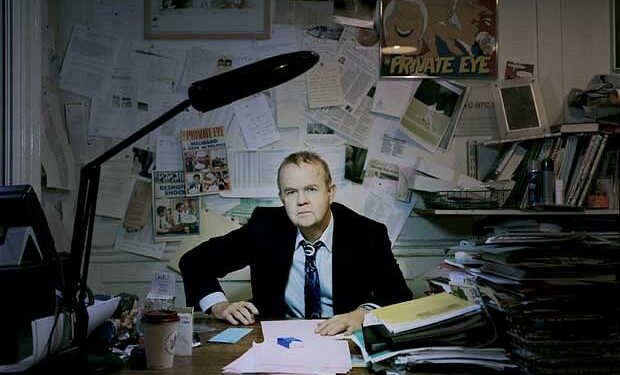 This week I was the victim of two non-crime hate incidents at the hands of the comedy establishment.

The strangest of these came from Private Eye. Once a satirical magazine guided by the genius of Peter Cook. Now, apparently, an organ for pearl-clutching Regime hit pieces.

Its slightly paranoid attack on me and the great GB News started with a claim about Mark Steyn that I can’t be bothered to look into, as it involves listening to a podcast other than my own. But clearly Private Eye felt Steyn’s two very recent heart attacks were not sufficient, and he deserved another blow in the form of their deadly investigative journalism, which went as follows:

Meanwhile, on his personal podcast, GB News presenter Mark Steyn said the slowing of the birth rate of “Aryans”, who built “Western civilisation”, had been accelerated by Covid vaccines.

Knowing the mainstream media, it is likely there some context or comedic intent was deliberately left out here. That was certainly the case with my delightful little mention that immediately followed.

Another purveyor of wacky Covid opinions is Nick Dixon, a host of GB News‘s paper review and presenter of the Daily Sceptic podcast, which grew out of a previous Lockdown Sceptics website founded by armchair epidemiologist Toby Young. When he’s not on GB News, Dixon can be seen online praising people who didn’t get the vaccine, calling them “pure bloods”.

They can only be referring to a tweet in which I jokingly (or so I thought) wrote “pure blood forever” followed by the strong arm emoji. I assumed the inclusion of said emoji marked the tweet as a bit of lighthearted fun. Some gentle bantz after two to three years of unvaccinated people being viciously attacked and ostracised by politicians, media, friends and family.

But no, it turns out this tweet was merely the beginning of my new Aryan eugenics project. At least I think that’s what Private Eye is implying. Why else move straight from the Steyn thing to the ‘pure blood’ reference?

As for “wacky Covid opinions”, well, guilty as charged. I was against, for example, locking people down in their homes, thus creating catastrophic NHS waiting lists, capsizing the economy, damaging children’s mental health, and, as they say, so much more!

Also, our podcast is called the Weekly Sceptic, and I have never even seen Toby sit in an armchair. He moves through his insane and largely self-inflicted work schedule so fast I usually only witness him as a passing blur.

Still, at least they called me the ‘host’ of Headliners. I only host occasionally, so they could have gone with ‘panellist’. Sometimes lazy inaccuracy is a huge win.

Needless to say, I both owned and destroyed these satirists-turned-establishment shills in another classic Dixon tweet, calling them out for their ‘tainted blood’ resentment. I look forward to their next piece examining my wacky fascist agenda.

The other attack was more banal, though even less accurate. I was enjoying an increasingly rare day off (I seem to have become caught up in Toby’s workaholic vortex) when someone sent me the clip. Much as they did the Private Eye piece, in fact. I do not seek these things out, dear reader. Rather, friends simply enjoy ruining my day.

It featured a young man by the name of Sloss. Daniel Sloss, a Scottish comedian and posh mummy’s boy, who got a break writing for Mock the Week at age 16. His comedy suffers from the blandness of one who has never truly known pain.

Of course, I wouldn’t normally be so uncouth as to say any of this. But he started it.

GB News, and I can confirm this, has absolutely no comedians on it at the moment… some people will have the word ‘comedian’ beside their name, but as an actual comedian I can assure you the ‘comedians’ on GB News are not actual, real comedians who’ve done the circuit, or earned the respect of their peers, or put in the hours, or done anything.

As an attack it is flawed by being completely untrue in every regard.

To quote the movie Barton Fink: never mind me, never mind how long I’ve been in pictures. But let’s consider the mighty Simon Evans. Host of GB News’s Headliners, and one of the most respected comics in the business by any metric.

He is represented by the biggest comedy agent in the U.K., whose bio for him literally begins: “Simon is one of the U.K.’s most respected and established comedians.”

Simon has performed on Live at the Apollo, done multiple tours of the country, and just about every other ‘real comedian’ thing you can think of.

Then we might mention Carey Marx, a comedy circuit stalwart for many years, or Josh Howie, Leo Kearse, Roger Monkhouse, Lewis Schaffer (because he’ll complain if I don’t include him). And many, many more.

Even humble old ND. I did the comedy circuit for 11 perfectly gruelling years, performing weekends at the Comedy Store (the peak of the U.K. live club scene) and every other club in the land. Two national tours with Tom Stade. Two TV appearances on Comedy Central at the Comedy Store. Weekends in windowless Manchester hotel rooms after playing the Frog and Bucket. Five hour night coaches back from the Leeds Hi-fi Club. I have performed at the L.A. Comedy Store and the Hollywood Improv, and done a comedy festival in Portland. I supported Europe’s biggest comedian, Gad Elmaleh. I won the Comedy Store King Gong show in 2012, for pity’s sake. I could go on.

But no one cares. Except me. And Daniel Sloss.

Since their words have no meaning, and refer to no known reality, we can only conclude they are mere automatons. Ideologically-captured ‘NPCs’, wandering through a rather violent video game called ‘Culture War’, doing only what they are programmed to do, then disappearing, one can only hope, into mindless oblivion.

The NHS is in Permanent Crisis, But it Will Never Accept Reform