More NHS Mask Shenanigans – Will It Ever End? 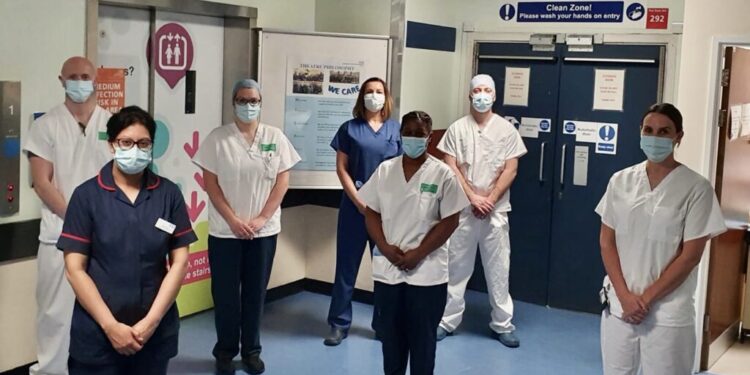 For some time now it has been crystal clear that the existence of so-called ‘mask mandates’ within the NHS is a postcode lottery.

Whether you are expected to ‘mask up’ in your GP surgery or hospital is often entirely due to the personal whims of local managers and bureaucrats. Ever since June of last year, when NHS management changed its ‘guidance’ to remove the mandatory requirement to wear face coverings as a default across the entire health service, decision-making has been left to local institutions.

As previous investigations have shown, one group of usual suspects responsible for the imposition of ineffectual masks are those who are part of Infection Prevention and Control (IPC) departments. However, as The Covid Physician describes in the Hallowe’en 2022 section of his ‘end of year’ missive, anyone who has the mojo for imposing restrictions can be part of the mask police; from junior GP receptionists to senior trust managers. All it seems to take to rekindle fear amongst the public and colleagues is an unshakeable belief in one’s ‘right think’ and virtue, combined with a total unwillingness to consider any other information or perspective.

The latest example of this masking madness can be found in the recent pronouncement of the combined Northampton and Kettering Hospitals Trusts where, because of a “significant increase in Covid, flu, RSV and norovirus infections”, masks have been reintroduced. Along with other regressive and soul-crushing measures, such as restricting patient visits, we are expected to believe that masks will “reduce infection risk”, “prevent the spread of infections” and “prevent staff absences”. Bearing in mind that none of these interventions have done anything to help in these matters in the past, why we are expected to believe that they will effect any change now stretches credulity beyond breaking point.

But then, when it comes to ‘following science’, Northampton and Kettering hospitals have a very poor track record, stretching back to the beginning of this Covid period. In June 2020, then-CEO Sonia Swart commented in her mask and face covering statement that, “Evidence has confirmed that face coverings can help reduce the risk of transmission if someone is suffering from coronavirus but not showing symptoms – if they are asymptomatic”. What that evidence might have been, users of the hospitals’ services weren’t told, but they were reassured that, even though they could be “fabric, non-medical”, these masks would “help protect them and others”. This faith in the magical properties of pieces of cloth to protect against a tiny airborne virus was reiterated in the guidance that accompanied Dr. Swart’s message, noting that surgical masks were not “necessary”, coverings such as a scarf or bandana being “acceptable”.

And so it has continued, with the hospitals reintroducing masks in July 2022 as a response to the “U.K. experiencing a very significant spike in COVID-19 cases” and the “current variants being infectious”. In September these restrictions were relaxed, only to be reimposed in October for the same reasons and to serve the same goals of “protecting vulnerable people” and easing the impact of staff going sick.

As to who is responsible for these seesaw measures, the buck seems to stop with two individuals: Fay Gordon, Chief Operating Officer (COO) for Kettering Hospital Trust, and Palmer Winstanley, COO for Northampton Hospital Trust and non-voting member of the combined hospital group’s board. Winstanley, a former British Army captain, has worked within the NHS for about three years. (Irony of ironies, the Northampton IPC department won the Investors in the Environment “Best Waste Reduction Project” award in 2022 for its “be PPE free” campaign, which concentrated on reducing excessive use of personal protective equipment.)

In their public pronouncements, similar to Dr. Swart in 2020, neither Gordon nor Winstanley have chosen to share the evidential basis for their decisions to re-inflict mask misery on their patients. Like so many NHS management mavens, they seem unable – or unwilling – to understand that there is only weak and contradictory evidence that supports a position that a piece of damp cloth offers any protection against a virus, and plenty that shows they introduce risks and harms to the wearers.

Is this determination to ignore the facts and instead continue to use a mixture of faith and hope as a means of protecting the vulnerable based on anything other than blind belief? Or is it a pig-headed resolve never to admit an error of judgement; an example of the sunk cost fallacy in action? Either way, we have to hope, for the sake of the patients of Northampton and Kettering Hospitals, that things change and these mask manoeuvres come to an end soon.

Paul Stevens is a member of Smile Free, which campaigns for the end of mask mandates and masking.