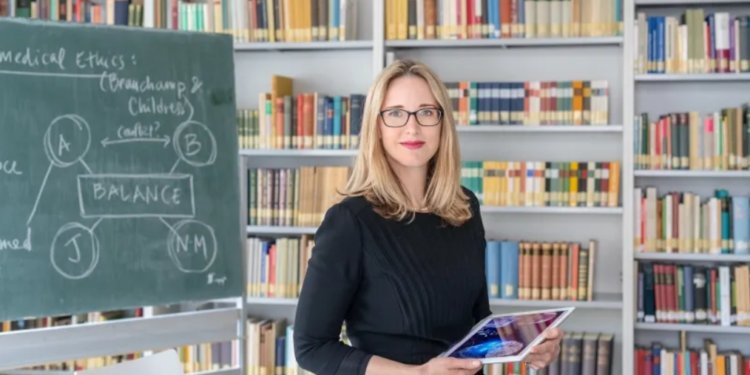 The German Ethics Council is an independent advisory body which has existed in some form since 2001, and which has a mandate to advise the Government especially on matters of bioethics. It met its first serious test during the Corona era, when the entire political and bureaucratic leadership decided that the best way to respond to SARS-2 would be to commit massive human rights violations. Naturally, the Ethics Council not only failed to oppose these extraordinary policies, but supported them wherever possible.

Among the failures serving on the Ethics Council is its chairwoman, a medical ethicist and professor named Alena Buyx. Like Emily Oster, Buyx is an archetypal Head Girl – highly conscientious, deeply conformist, mildly intelligent and totally bereft of all originality and independence of thought.

Also like Emily Oster, Buyx has decided that it would be better not to blame anyone for the hell that the Corona brigade has put all of us through. Her most pointed remarks to this effect come in a long and otherwise unremarkable New Years interview she gave to Die Zeit:

ZEIT ONLINE: … We’ve talked about the lack of solidarity and justice – would it be advisable for politicians to apologise [for overreaches during the pandemic]?

Buyx: May I start with the Ethics Council? We’ve clearly been self-critical and named our mistakes. Self-criticism like this is a form of apologetic openness. But I was really surprised by the reaction.

ZEIT ONLINE: Because it provoked even more criticism of you and the Ethics Council?

Buyx: There is a deep, comprehensive need to deal with this pandemic. And apparently also to find someone to blame. And for very different aspects of it: Blame for individual decisions, or for the whole policy. For what happened to people. For their losses.

ZEIT ONLINE: Even for the pandemic itself, many are seeking culprits, if you follow the discussion about the origin of the virus.

Buyx: Yes. And for political decisions, for measures, even for discussions, for statements and much more. And that’s where you reach the limits of what is possible. Personally, I have no problem apologising for the fact that we at the Ethics Council have not focused enough on the young. But there is something insatiable about this need to find culprits, which sometimes seems to be more about revenge, about seeking propitiation. A search for culprits driven by revenge and anger is dangerously easy, and so it’s not a solution, it doesn’t help at all.

There is a need for much more learning and honest, serious retrospection, there is an obligation to do that, and that’s what is happening. It’s about learning from what didn’t go well and looking to the future with new recommendations. All this should remain constructive; we shouldn’t stop at criticism and self-criticism. But no one would benefit from public flagellation now.

Every time another Head Girl demands amnesty, I am going to re-post this photo of Dutch police kicking a lockdown protester in the head.

It was taken in March 2021, at one of the many protests that erupted after the months-long second- and third-wave European lockdowns. The failure of containment policies to stop the virus had by that point driven governments into a frenzy of repression – a “search for culprits driven by revenge and anger” if ever there was one, and a search against which the Buyxes of the world spoke not a word. They were equally silent when it was the vaccinators’ turn to fail and people like Karl Lauterbach fulminated that the unvaccinated were holding all of society hostage. That was all okay, but now, nobody should be interested in assigning blame. That’s not constructive.

Of course, the reason you publicly denounce, investigate, fire and imprison criminally negligent bureaucrats and policymakers is not because anyone “would benefit from public flagellation now”. The damage has been done. Where it might help, though, is in dissuading future bureaucrats and policymakers from doing anything similar the next time a novel coronavirus presents itself.

This is something that Buyx simply cannot understand.

She has no real idea of what went wrong these past few years, though increasingly she can’t deny that something did go wrong, because every day the broader social consensus to which she is in thrall tilts a little more against the excesses of the pandemicists. As a Head Girl, though, she believes deeply that conformity is pro-social. Agreeing with everyone makes her feel good deep down inside. In her mind, she’s been doing the right thing all along.