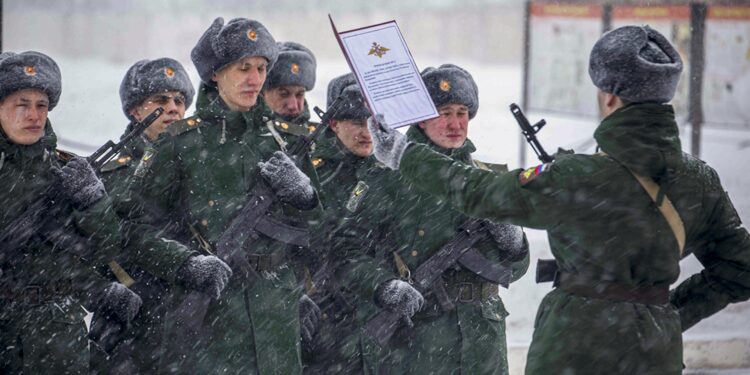 It’s important to put this into context. There is still overwhelming support in Russia for the military’s actions in Ukraine (73%), which might at first seem contradictory, but which merely suggests the desire for peace talks versus continued fighting arises from pragmatism and concern for an army they support.

The reasons for this concern aren’t hard to imagine. The “partial mobilisation”, which followed the disastrous rout from the Kharkiv region in September, is clearly one. Mobilisation, in Russia, turned out to be a euphemism for the shambolic rounding up of fighting-age men, who often had to provide much of their own food and equipment before being bussed off to Ukraine and told by drunken and inept commanders to advance on Ukrainian positions without adequate weaponry or clothing, or huddle in freezing and hastily-dug trenches to die of hypothermia. Advancing Russian troops have been easy targets for Ukrainian indirect fire and drone-dropped grenades, and at Bakhmut in particular (where Wagner PMC and its cadre of ex-convicts has also been heavily involved), the treatment of Russian soldiers as “single use” weapons has been horrific but also pitiful to the point where – paraphrasing Ovid – even the goddess Hera might have thought it a bit rough.

Yet, despite much heavy fighting and repeated attacks in some areas, there has been no Russian breakthrough. The retreat from Kherson and the widespread failure to make any gains, combined with the dawning realisation that Russia is losing, is likely the second reason for this shift in public opinion.

In an attempt to shore up support for the war, Putin recently put on a charade where he met some hand-picked stooges acting the part of mothers of Russian soldiers (who have traditionally been held in special regard by Russian society). During the meeting, Putin made a strange remark – but one that I think probably struck home. He reflected on the hopelessness of many Russian men, implying that it was better to be killed in Ukraine than succumbing to alcoholism inside Russia. And while in some societies alcoholism might fuel the caustic wit of a Christopher Hitchens or even make Country music appealing, the sheer pointlessness and misery of life in many of Russia’s remote towns and villages has produced nothing more than a few Darwin Awards. At least those killed in Ukraine died for a cause, Putin can say. Although, contrary to the earlier claim that the parents of fallen soldiers would be rewarded with enough money to buy a Lada, recent reporting suggests the winnings from this particularly deadly form of Russian roulette might now amount to just three towels and a card.

A recent focus group study, also conducted by the Kremlin in secret and leaked to Meduza, revealed that the tone of many respondents has changed to one of sullen withdrawal. “Leave us alone,” they seemed to be saying – we’re sick of hearing about it. As before, this suggests to me a genuine and deep dissatisfaction with the conduct of the war – which as patriots they would like to support, but which is becoming increasingly difficult.

However one slices it, little is likely to change as a result of these studies. Russians may be coming to the conclusion that the war isn’t going well (and also that things are getting worse inside Russia), and may wish for negotiations, but Ukraine knows full well that while Russian troops are on its soil, any kind of cease-fire – Putin’s aim in seeking negotiations – would only allow Russian forces to fix their gains and give them time to regroup before resuming hostilities at a time of their choosing.

And while it may be notable that it’s the Russian equivalent of the U.S. Secret Service doing this polling, indicating that the Kremlin at least pays some attention to public opinion, nevertheless Putin won’t be voted out of office, and no-one in a position to challenge him has any desire to embark on an exciting but brief career as a window quality control inspector. So as before, the West needs to continue to provide support for Ukraine and its valiant armed forces, but this half-hearted support – which balks at providing Western tanks and aircraft – needs to turn into total support, so as to help Ukraine bring this to an end as soon as possible. For this to happen, the myth that Russia would escalate to the use of battlefield nuclear weapons – which supposedly alarmed China, leading to the U.S. preventing the supply of aircraft to Ukraine – needs to be understood as such. Until then, the very real consequences of this increasingly desperate act of Russian aggression – at times reminiscent of both Stalingrad and the trenches of World War I – will continue to mount up, in terms of completely unnecessary deaths on both sides.