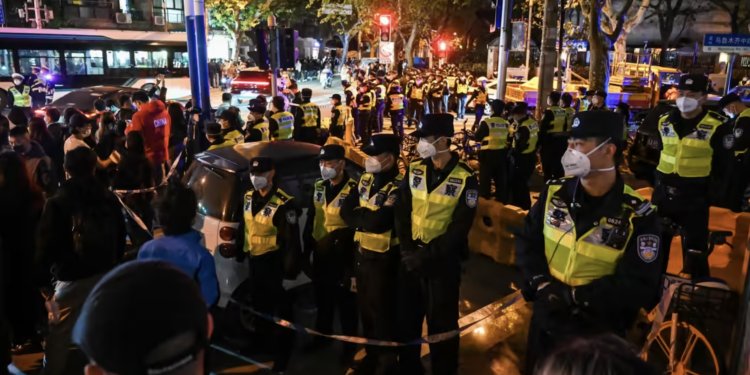 Demonstrations erupted in at least seven cities – including Shanghai, Nanjing and Guangzhou – with violence breaking out between local cops and furious protesters.

Officers used pepper spray against about 300 protesters, according to a witness, but western journalists reported the numbers to be in the thousands.

Meanwhile last night hundreds gathered to mourn the deaths of at least 10 people in an apartment fire last week in Urumqi in the Xinjiang region, where residents were sealed in their buildings to try to stop the spread of Covid.

It comes amid China launching another mass crackdown on the virus with crippling lockdowns put in place across the country, nearly three years after the pandemic started there.

The nation reported another 39,791 new cases spread across the country – the biggest one-day increase on record – including a record 4,307 in Beijing alone.

But it appears ill-equipped for the latest battle with Covid, with it using its own vaccines, rather than approved foreign ones, which do not have the same effectiveness at beating back the virus.

Public fury forced authorities in the far western Xinjiang region to open up parts of the capital Urumqi, which has been subject to a punishing ‘Zero-Covid’ lockdown for more than three months.

Witnesses said one of the protests also occurred in Urumqi where the fire occurred after complaints it worsened the death toll.

The protest was triggered by the deaths of at least 10 people in a fire at a high-rise apartment block. Some have claimed lockdown measures hampered rescue efforts and the ability of residents to escape.

Footage posted online showed hundreds of demonstrators confronting riot police on the streets of Urumqi, where many of the four million residents have been barred from leaving their homes for as long as 100 days.

President Xi Jinping´s Government faces mounting anger at its ‘Zero-Covid’ policy that has shut down access to areas throughout China in an attempt to isolate every case at a time when other governments are easing controls and trying to live with the virus.

Stop Press: Protests continued on Sunday evening. The FT has more. In addition, the Telegraph reports that the protests have spread to Wuhan as protesters pull down Covid-quarantine barricades and march through the city chanting “we want freedom!”, ignoring orders to show their health passes (watch here). Meanwhile, last night a BBC journalist covering the protests in Shanghai was arrested, thrown to the ground and beaten and kicked by the Chinese police. MailOnline has more.