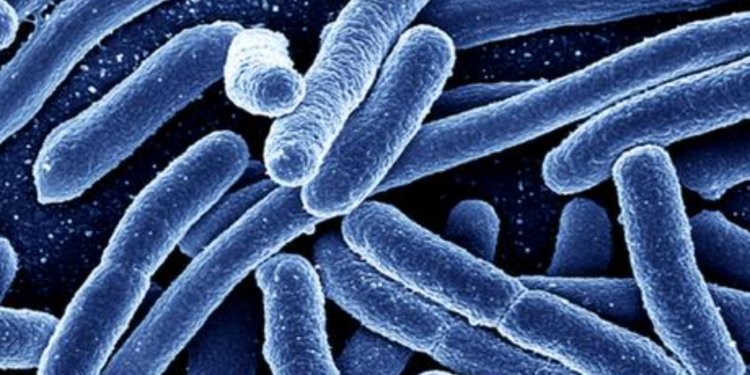 Escherichia coli – E. coli  for short – is a bacterium with two faces. Some strains produce toxins that cause gastrointestinal disease. Set these aside. We’re concerned with the other strains that live innocuously in the colon. They’re among the most abundant gut bacteria and only cause trouble if they reach other body sites.

This happens if the gut contents leak during surgery, for example, or via a ruptured appendix. More commonly, particularly in women, gut E. coli reach the urinary tract and swim upwards, causing UTIs (urinary tract infections). Some strains are especially adept swimmers; five or six ‘uropathogenic’ lineages account for half of all UTIs.

In total, E. coli causes 80% of all UTIs, with 150 million cases annually worldwide. Most are painful but self-limiting ‘cystitis’, reaching no higher than the bladder.  These used to be treated with trimethoprim. Nowadays, owing to trimethoprim resistance, nitrofurantoin is preferred. A few reach the kidneys and, worse, then spill into the bloodstream. That’s bacteraemia – bacteria in the blood – which can trigger life-threatening sepsis.

E. coli accounted for a third of all U.K. bacteraemias in fiscal year 2019-20, with a tally of 43,395 cases, mostly in the elderly. Hospitals in England are obliged to report these, so numbers should be robust. UTI ‘overspill’ accounts for at least half; gut leakage for a quarter. Most UTI-origin cases develop in the community and enter hospital through A&E.

Around 18% of E. coli bacteraemia patients die in the U.K. This rate roughly doubles if treatment is inadequate, usually because the E. coli strain was resistant to the first antibiotic given. (The patient must be treated immediately but it takes two days for the lab to get results, creating a window for error.) Mortality must be similarly high among untreated bacteraemias. Keefer, at the end of the pre-antibiotic era, found 35% deaths.

Right, that’s the background. Now, look at case incidence for England (figure 1). Three points stand out: 1) a long upward trend to 2019-20; 2) summer peaks, never properly explained and 3) a big step down at the start of the Covid pandemic. It hasn’t gone up again.

This step isn’t apparent – with a caveat below – for the subset of hospital-onset E. coli bacteraemias (figure 2), or for Klebsiella (not shown), which is related to E. coli, but is largely a nosocomial (hospital-caught) pathogen.

Five possible explanations can be dismissed:

So, we’re left with the likely explanation: that community patients whose UTIs ‘go bad’, leading to potentially fatal bacteraemia, aren’t presenting at A&E. Maybe they are not even receiving treatment for the underlying UTIs in the first place. A drop of 60-70% in UTI diagnoses was asserted early in the pandemic, with only a partial ‘recovery’ by October 2020. Formal publication and extension of these important data is still awaited.

Next, consider two strands of anecdotal evidence. First, Carl Heneghan stresses how easily a UTI is missed in 92-year-old Mrs Jones who – as so often with the very elderly – lacks typical symptoms.  Rather, she “is a little confused and a bit wobbly on her feet, though all her observations are normal”.

She’d be even harder to diagnose via a telephone consultation, should she be able to book one. Which brings us, secondly, to the ex-wife of a prominent Cabinet Minister calling her GP apropos a respiratory tract infection.

After 47 attempts to get past the ‘engaged’ tone (my phone logged them), I finally got through to a recorded message about how busy they were, and I was placed in a queue. I actually felt grateful.

I waited a further 40 minutes before the receptionist finally answered, only to be told – you guessed it – that no appointments were available.

On Tuesday, the infection was much worse. I tried again. This time it took 45 minutes to get through. Again, no appointments were available. The receptionist suggested emailing.

It’d be no easier for a UTI. And it’d be harder if, unlike Sarah Vine, you are 92 years old, a little confused and wobbly on your feet. It’d be tempting to give up.  Numerous missed UTIs and consequent community-onset bacteraemia seem very likely.

As has been widely flagged, the U.K. is persistently recording 10-15% excess mortality. Unusually large numbers of deaths are occurring at home. My view is that these deaths overwhelmingly comprise groups who didn’t or couldn’t access medical attention over the past two and a half years. At present cardiac deaths are prominent. Still to come is a large slab of deaths from cancers that would have been treatable had they been diagnosed in 2020, but which were diagnosed late.

But somewhere, hidden among the total, is a slice of my missing community-onset E. coli bacteraemias. A mortality rate of 35%, as in the pre-antibiotic era, would predict 1,750 deaths among missing 5,000 patients, half of them preventable with adequate antibiotics. So, a little under a thousand annually. But, it’ll be significantly higher if, as is very likely, more untreated ascending UTIs has led to more undetected bacteraemias than before the pandemic.

Dr. David Livermore is Professor of Medical Microbiology at the University of East Anglia.

Who Isn’t Involved in the Cover-Up of the Lab Leak and Early Covid Spread?