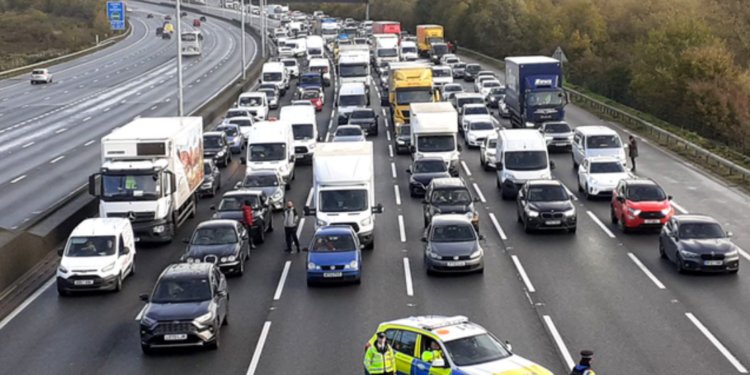 When major parts of the country’s busiest motorway are forced to close by deliberate sabotage for four days running, that is a news story of national importance, says Janet Daley in the Telegraph. Why then have the police arrested a journalist for covering the story – and defended their actions by saying journalists should stop reporting on it? Hertfordshire police’s defence of their chilling actions carry dangerous implications, says Janet.

While attending one of the sites of this lunatic delinquency on a busy section of the M25 last week, they formally arrested not only the Just Stop Oil brats but a broadcast journalist who was covering the incident.

Charlotte Lynch, a reporter from LBC radio was a considerable distance from the protesters desporting themselves on the gantry, and was in possession of an accredited press card which a five minute telephone call would have verified.

Nonetheless, she was apprehended by officers on “suspicion of conspiracy to commit a public nuisance” and imprisoned for five hours. That is to say, she was potentially to be charged with precisely the same offence as the protesters would be.

Nobody so far as I can see has actually suggested that the arresting officers believed her to be part of the demonstration or even supportive of it. This is where the explanation of the arrest by David Lloyd, Hertfordshire’s Police and Crime Commissioner, becomes really alarming. He did not defend it on the basis that his force made a mistake: that they believed wrongly that Ms Lynch belonged to the Just Stop Oil troops.

What he did say was much more far-reaching and political than that. He advised journalists generally to “think about how we as a society… ensure that the oxygen of publicity that Just Stop Oil is seeking is moderated, so that we don’t end up with people doing this and really they’re only doing it because they know it’s going to be reported.” The syntax may be garbled but you get the point.

When the police say these things “we can see the shadow of the Stasi loom quite clearly before us”, Janet says. And this is far from the only area where silence is regarded as the socially correct choice and speaking out is seen by the guardians of manners as unacceptable.

But almost identical sentiments are now dominating areas of national life that have generally been assumed to be dedicated to the preservation of free thought and uncensored debate. In fact, it is within the social circles inclined to support extreme climate protest that you are most likely to find approval of such censorship.

What Mr. Lloyd advocated is nothing more than yet another species of cancel culture. Put succinctly, it is now a received truth of Left-liberal orthodoxy that if you see views or activities which you believe to be harmful being promoted in your society, it is your moral duty to suppress them or prevent them from being promulgated. That is pretty much precisely the philosophy that Mr. Lloyd is espousing.

The wall-to-wall pro-lockdown narrative during the pandemic is a recent case in point, says Janet:

I – and many others – believed that the uncritical pro-lockdown campaign run by the broadcast media during the Covid pandemic was ethically dubious and professionally misjudged. Those of us who criticised it did so on the grounds that such coverage had ceased to be news at all: that the broadcast organisations had turned themselves into an arm of Government and were effectively now propagandists.

Sceptical viewpoints were deemed dangerous and their proponents attacked and censored. Yet no sceptic is suggesting media should be banned from running alarmist stories, Janet says: “We need to open up the arguments not close them down. That’s the whole point of journalism.”