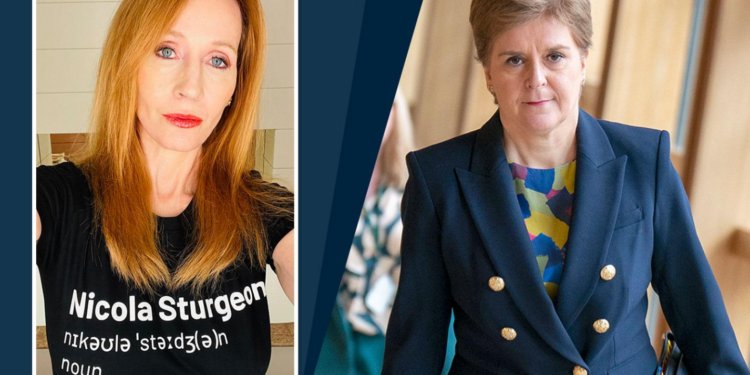 J.K. Rowling has branded Nicola Sturgeon a “destroyer of women’s rights” over Scotland’s transgender ‘self-ID’ law as the SNP leader implied Rowling was not a “real feminist” amid an escalation of the two Scottish women’s war of words. The Mail has more.

The Harry Potter author and the First Minister are at loggerheads over trans-issues and the Scottish Government’s legislation to make it quicker and easier for individuals as young as 16 to change sex with no requirement for medical reports or evidence.

Yesterday Ms. Rowling branded the SNP leader a “destroyer of women’s rights” – wearing a T-shirt with it as a motif – and today Ms. Sturgeon ratcheted up the row by suggesting that the author is not a “real feminist” – and that she is.

Ms. Rowling, who is opposed to Scottish independence and donated £1 million to the campaign to stop it, has yet to respond publicly to the latest barb but she has liked a tweet this afternoon from a supporter who was upset by the First Minister’s comments.

The message said: “Her [Sturgeon’s] intonation on ‘real feminist’ was, for me, an ugly reminder of the school playground when the mean girls would circle me and taunt me for being too poor, or too clever, or simply weird. At heart, Sturgeon is one of the mean girls.”

The term “mean girls” was popularised by the 2004 movie of the same name. Its protagonist Regina George, played by Rachel McAdams, has been branded the world’s most evil high school student. Mean girl behaviour is characterised by gossiping, verbal put-downs of others, bullying, backstabbing, and using others to get ahead.

After the Harry Potter author branded the SNP leader a “destroyer of women’s rights”, the First Minister fought fire with fire this morning and declared: “I’ve spent my entire life campaigning for women’s rights, and I’m a passionate feminist with lots of evidence behind that.”

And in a thinly-veiled attack on the feminist credentials of Ms. Rowling, and members of For Women Scotland (FWS), she said: “There are no shortages of attacks on women that feminists, real feminists, as I consider myself to be, should be focusing on right now,” and accusing them of trying to “stigmatise and discriminate” against transgender people.

Women’s Rights Campaigner Kellie-Jay Keen, who designed the T-Shirt Ms. Rowling and other protesters wore yesterday, said of Sturgeon’s attack: “It seems utterly implausible that anyone who cannot define a woman as an adult human female could even begin to call themselves a feminist.”

Caroline Ffiske from Conservatives for Women said: “Nicola Sturgeon’s comments about J.K. Rowling not being ‘a real feminist’ are absurd. J.K. Rowling has been a hero and an inspiration for tens of thousands of women across the United Kingdom who have become increasingly concerned about the impact of gender ideology.”

The Mail explains what the SNP’s ‘self-ID’ reforms entail:

The SNP’s Gender Recognition Reform (Scotland) Bill sets out proposals to speed up the time it takes to get a gender recognition certificate (GRC). The legal update would also lower the age at which trans people can obtain the document from 18 to 16. The Bill would cut the length of time a person has to live in their acquired gender before applying from two years to three months. They would then have to undertake a mandatory three-month ‘reflection period’, confirming at the end of this if they wish to proceed with their application. A medical diagnosis of gender dysphoria would no longer be required, removing the need for doctors’ reports.

Teenagers being able to decide for themselves they’re the opposite sex – what could go wrong?