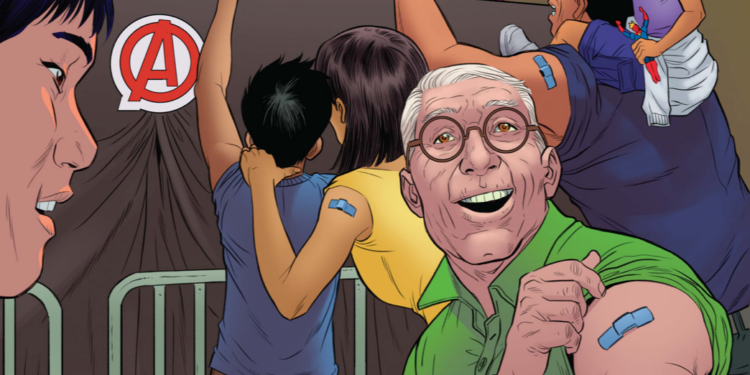 Pfizer has sponsored a new comic, Everyday Heroes, that urges people to get their autumn boosters. The plot of the new comic centres around a grandfather waiting for his jab at a clinic that comes under attack by the Avengers villain, Ultron. Laura Dodsworth has more.

“We can fight back against even tough, ever-evolving enemies,” the masked up grandfather assures the people in the waiting room, “if you’re willing to adapt, fight back and take steps to help protect yourself. It’s also important for entire communities to come together and help fight the threat.” Not all heroes wear capes, you know.

This is brave of Marvel and Disney. Mixing face masks and vaccines with super heroes is either very confident, or very profitable. Dress it up how you want, but bandaids on old men’s arms aren’t exactly superhero-ish. It’s a long way from muscular Thor and his hammer. And every adverse vaccine event stands to puncture the allure of the super hero like a needle through a cape.

We know from documents obtained by freedom of information requests by Judicial Watch Inc, that the U.S. Government planned to partner with Hollywood guilds to “work vaccination messaging into scripted and reality TV shows”, Disneyland Parks, major sports leagues, social media platforms, Catholic newspapers and newsletters, TV morning and daytime talk shows, Hispanic entertainment networks… the list goes on. This new comic is part of a vast plethora of communications to shift uptake.

“Entertainment is sugar-coating for mind pills,” Edward Hunter said sagely in his book Brainwashing: The Story of Men Who Defied It. Hunter interviewed Korean War veterans who survived P.O.W. camps and civilians who were in China about their experiences of brainwashing and how they survived. The “mind pills” relate to the saturation treatment in society, whereby people simply could not escape from communist propaganda, including in entertainment.

Generally we connect television propaganda with authoritarian and communist countries. However, using television for social engineering is not the sole preserve of those regimes. It is increasingly obvious that even in democratic countries there can be an unofficial relationship between government and entertainment media. You might think that the ends justify the means especially in the case of a pandemic, or any public health messaging. But the distinction between public health goals and political goals are not so clear.