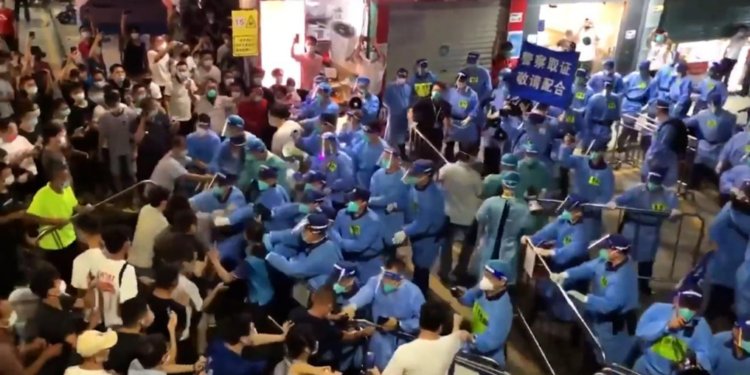 The protests against China’s ruthless Zero Covid policy continue to grow as President Xi Jinping shows no sign of changing tack despite even Hong Kong easing towards a more liberal approach. Ian Williams writes about it in the Spectator.

Another COVID-19 lockdown, another angry confrontation. This time it was on the streets of Shenzhen, China’s high-tech hub, where videos this week showed an angry crowd facing off against police officers wearing protective medical gear, including blue gowns, masks and plastic visors. “Lift the lockdown,” the protesters yelled, pushing against hastily erected barricades. Some threw plastic bottles at the police. In one clip, a woman can be heard shouting, “The police are hitting people”.

The protest, one of several reported in the city, followed an order for residents of three districts to stay at home after just ten infections were detected. Subway stations were closed, and affected areas cordoned off. The city of 18 million people, which is located next to Hong Kong, has faced a series of lockdowns this month. Covid outbreaks have been reported in more than 100 cities since early September.

The authorities have stepped up their ruthless and often chaotic restrictions ahead of a key meeting of the Chinese Communist Party next month, at which Xi Jinping is expected to be anointed as party boss for an unprecedented third term. ‘Defeating’ the virus has become central to the cult of Xi, for whom it is a measure of the CCP’s superiority over bungling western democracies. Party propaganda has gone into overdrive ahead of the congress. The Chinese people have faced a barrage of slogans relayed online, as well as on television and by loudspeaker, urging them to “Extinguish every outbreak!” and telling them that “History will remember those who contributed”.

This weekend is the beginning of China’s week-long National day holiday, usually a time when tens of millions travel. Instead they are being urged to stay at home, and those still planning to travel to Beijing, where the CCP’s congress is to be held, must show a negative PCR test result taken within 48 hours of travel and take two more tests within three days of arrival.

Another slogan, “We have won the great battle against Covid” is clearly a little premature, but it neatly sums up the party’s obsession with zero-Covid. And although the policy is widely regarded as nonsensical among medical experts inside and outside China, to publicly question it is to question Xi, and that is a dangerous thing to do in today’s China.

Yet the economic costs continue to mount, Williams writes, leading Hong Kong to defy the Beijing policy and loosen its own measures.

Hong Kong is abandoning quarantine requirements for inbound travellers, which have been blamed for an exodus of talent and undermining the city’s international status. Today it announced a further easing of social distancing rules, including lifting a restaurant cap that had restricted groups to six per table. Now 12 can dine together.

The Chinese economy is suffering considerably under the extreme suppression measures, and of course the people are too. How long will Xi and the CCP decide to keep this up? We’re approaching the three-year mark. The virus isn’t going away.

Liz Truss Advises King Charles to Stay Away From Cop27