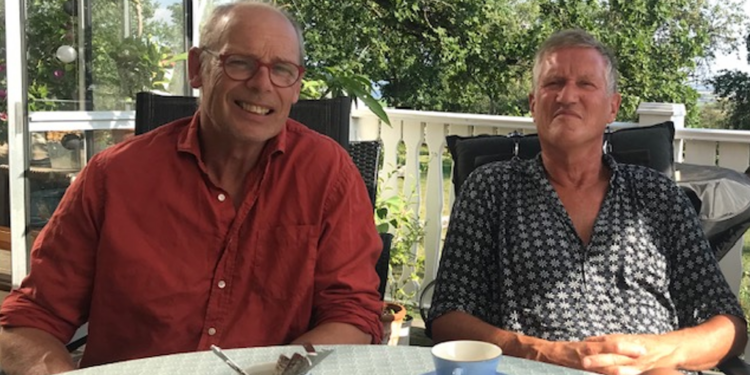 It was with a slight sense of trepidation that my wife and I turned onto the dusty track that led up to the cluster of pretty falu red farmstead buildings (I wore a shirt to match) on the edge of Vreta Kloster. Vreta Kloster, on the shores of lake Roxen, 120 miles south west of Stockholm and 1,300 miles from Shropshire, is home to the ruins of Sweden’s first nunnery, the Tonkin golf ball museum and Anders Tegnell, Sweden’s State Epidemiologist until March this year when he stood down. Anders Tegnell who, in the face of unimaginable international pressure, personal abuse and threats of physical violence, refused to be bullied into signing Sweden up to the global lockdown experiment – an experiment with entirely predictable consequences.

Sweden has emerged from the pandemic with amongst the very best outcomes on almost every metric – the economy, children’s education and emotional development, mental health, domestic violence, alcoholism and of course excess deaths. It is, in part, because of Sweden that lockdowns did not go on for longer in the U.K. and if lockdowns are never used again that will be, in large measure, because of Sweden too. To those of us across the world that had not succumbed to mass hysteria, it was Sweden that, for two long years, gave us hope and kept us sane.

So when deciding where to head to in our campervan for our summer holiday, we were drawn to mask-free Sweden. And why not, we thought, whilst we are there, drop off a note expressing our personal gratitude to Tegnell and his family. So it was on a glorious sunny day in late August we found ourselves heading up the track to the Tegnell’s Verta farmstead with a letter and two bottles of the Grange, surprisingly good, English sparkling wine – not French, for obvious reasons. Conscious that this unannounced visit might be seen as a little odd or even slightly disturbing, our plan was to drop and go whilst sort of hoping…

As we pulled into the yard, Margit Tegnell, Anders’ wife came out of the house. Margit was slightly taken aback but her initial look of slight concern was replaced by one of amazement and appreciation as we explained our mission and paid tribute to them both. Anders was not there so we handed over our present and a few minutes later, mission accomplished, Margit waved us off with a gift of plums. The golf ball museum was closed so we headed for Stockholm.

Later that evening I received an email from Anders. “Sorry to have missed you, if you are returning this way please come and say hello.”  Of course we were! Two days later we found ourselves back at Verta Kloster, sitting on the decking with Anders and Margit Tegnell, overlooking the recently harvested wheat fields running down to Lake Roxen. Anders was relaxed, he looked well and in good shape for 66; being proved right is clearly good for the health. Friendly and amazingly candid, for the next two hours, the four of us drank tea, ate home-made plum tart and chatted about the past two and a half years.

We talked about his approach of treating the Swedish people like adults, the popular domestic support even during the second wave, and about Swedish politicians taking a back seat. We talked about Neil Ferguson – his track record and his media skills – and the generally reasonable Swedish press. We talked about conference calls with world leaders (Rishi was against lockdown) and the tacit and sometimes explicit (but private) support for Sweden’s policies from political leaders whose panicked rush to lockdown had left them politically boxed-in with no option but to double down. We talked about masks (“don’t work at a population level and can give a false sense of security”) and about asymptomatic transmission (“not a major driver of infection”). We talked about children and closing schools – Anders is rightly proud that Sweden did not inflict the inevitable catastrophic damage on children that the rest of the world has done. The Swedish Corona Enquiry found that Sweden had got most of the big calls right, but we talked too about the high death toll in care homes (I didn’t know the Swedish courts refused to allow care homes to deny family visits) and the high death rates amongst those born outside Sweden.

And I asked if he had received an invitation from Dame Heather Hallett to appear before the U.K. Covid Enquiry. He hadn’t – it’s surely in the post.

Anders didn’t do it alone; he had robust professional and political support and a close-knit family behind him, but he was the point man. And as we headed back down the track on the long road home, I did start to wonder – what if Britain had stuck to its original plan with an unwavering Anders at the helm and Boris, the Churchillian leader and defender of freedom we hoped he might be, backing him all the way? How would it have played out?