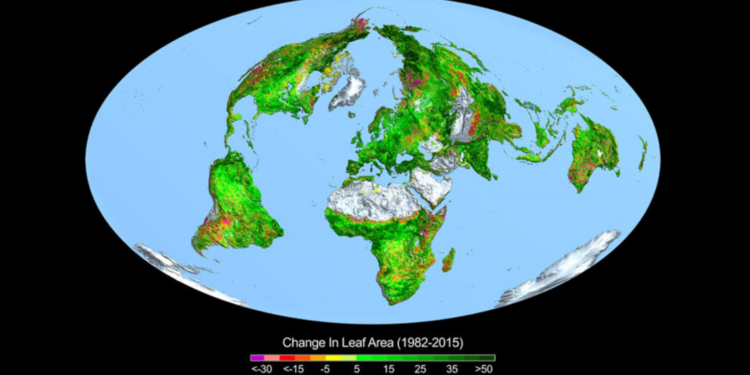 I was delighted to join Richard Tice last Sunday on his excellent Talk TV Sunday morning show to discuss some of the recent good environment news that is ignored by mainstream media. More Arctic ice, polar bears, seals and coral, of course. Great to be getting on with, but is there no end to all these glad tidings? Now, scientists have shown that world food production has soared in recent decades as carbon dioxide has taken small steps to reclaim atmospheric levels common through geological time until the relatively recent past. One Italian scientist estimated that reducing atmospheric CO2 back to pre-industrial levels would lead to an 18% decrease in the production of many basic global foodstuffs.

The current level of atmospheric CO2 at 419 parts per million (ppm) is near an all-time low. If it goes much lower, say to around 180 ppm, plant and human life will start to die off. According to the ecologist Dr. Patrick Moore, over the last 500 million years the amount of carbon in the atmosphere has fallen from 15,000 billion tonnes to just over 850 billion tonnes. A minute part of this enormous capture is released during periods of natural warming, especially from the vast stores held in the Earth’s oceans. Many scientists remain relaxed about rising levels of CO2. Dr. Roy Spencer, the former senior scientist at NASA, also notes the beneficial effect on plants, adding: “Though CO2 is necessary for life on Earth to exist, there is precious little of it in Earth’s atmosphere.”

Of course the current alarm about CO2, politicised in the interest of pushing the command-and-control Net Zero project, is about its warming effects in the atmosphere. But links showing an automatic increase in temperature after a rise in CO2 are hard to find throughout the 600 million year climate record. One interesting hypothesis gaining scientific ground is that the gas becomes ‘saturated’ after a certain point, and its warming properties fall dramatically. This hypothesis is not proven to the satisfaction of all, but it remains a more plausible explanation of past observed trends than the automatic linking proposition that has become part of  ‘settled’ science.

What is beyond dispute is that the Earth has ‘greened’ dramatically over the last 40 years, thanks to the extra gas. It has been estimated that there has been a 14% increase in vegetation, mostly due to higher levels of CO2 in this period. In a paper published in 2016 by 32 authors from eight countries, it was noted that there was a “persistent and widespread increase” in growing season greening over 25-50% of the global vegetated area. Recent increases in global vegetation are shown at the top in a picture compiled by NASA. More vegetation of course means more food up and down the chain. Every form of life benefits, from insects to tigers, and of course humans.

On September 14th, the Daily Sceptic reported on the work of four Italian scientists who have undertaken a major review of historical climate trends and concluded that a “climate emergency” is not supported by the data. They also noted a considerable recent ‘greening’ of plant biomass caused by higher levels of CO2. Helped also by big improvements in agricultural technology, food yields have soared. Four crops, maize, rice, soybean and wheat, are noted to provide 64% of human caloric intake.

The graph above shows the huge recent gains in these yields over the last 60 years. The annual gains are between 2.4% and 3.8%. Of course, without these rises in agricultural productivity, the world would be a much poorer and hungrier place. The Italian scientists do more than hint at this when they note: “Global greening is a cultural challenge that leads us to reflect on the positive implications of the increase in the atmospheric levels of CO2.”

The climate science site No Tricks Zone recently highlighted two further scientific studies that showed higher CO2 fertilisation effects were driving global greening and enhancing photosynthesis. A group of agri-scientists suggested there would be a 30-50% increase in photosynthesis with CO2 in a range from 451 to 720ppm. This would lead to a 25% increase in crop yield. The scientists looked in particular at barley and found an increase in yield of 54% if CO2 rose to 700ppm.

Meanwhile, another group of scientists have found that elevated levels of CO2 are very helpful for fruit trees, producing “increased photosynthesis, efficient use of water, growth and biomass”. With CO2 at 600-750ppm, plants will grow 30% faster. Research is said to be lacking for fruit compared to many other crops, but the authors conclude that: “There is undoubtedly a ‘fertilisation effect of CO2’ on fruit species that increases with the advance of climate change.”

Climate, of course, is always changing, and the cancelling of debate about the subject under the ‘settled’ science directive is little more than an insult to the intelligence. There is presumed to be a wholly deleterious effect on the climate caused by humans burning fossil fuel. But no credible, peer-reviewed science paper yet exists that proves conclusively that humans cause all or most recent global warming. There is simply an assumption that higher levels of CO2 in the atmosphere will be catastrophic, producing warming that to date has only been seen in climate model guesses. No wonder many scientists are relaxed about higher levels of CO2. Dr. Patrick Moore, one of the original founders of Greenpeace, has even said he looks forward to the day when governments will meet to sign treaties promising to increase their carbon emissions.