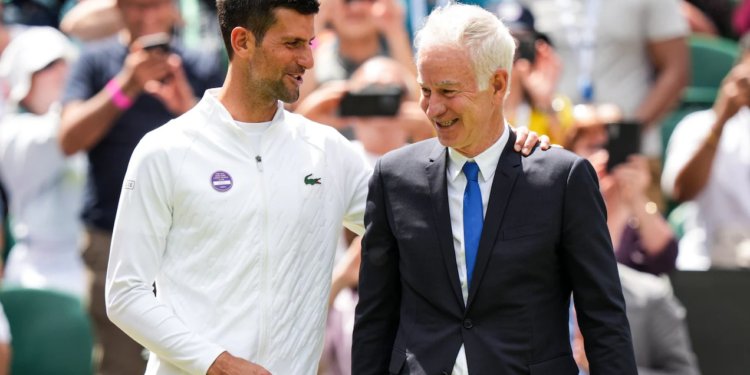 U.S. tennis legend John McEnroe has led calls for President Joe Biden to ease the “ridiculous” Covid ban on unvaccinated people entering the country to allow Novak Djokovic to compete at the U.S. open and aim for a record-equalling 22nd Grand Slam title. The Telegraph has the story.

A four-set victory over Nick Kyrgios sealed Djokovic’s seventh Wimbledon title to again move just one behind Rafael Nadal’s overall record of 22 Grand Slams but, after his infamous exile from Australia earlier this year, his fate again now rests on a country’s Covid laws.

Djokovic’s coach, Goran Ivanisevic, hailed Djokovic’s “heroic” ability to transform a “shit year” following the extraordinary low of being deported from Australia and McEnroe is now urging the American government to let him play the hard-court season and then next month’s U.S. Open.

“I’m not vaccinated and I’m not planning to get vaccinated so the only good news I can have is them removing the mandated green vaccine card to enter the United States,” said Djokovic.

“I’ll wait hopefully for some good news from the U.S. because I would really love to go there. That would be the next big tournament.

“If that doesn’t happen, then I have to see what the schedule looks like. I will not burden myself to have to go and play tournaments and get points. I don’t feel I’m in a rush really anywhere to end my career in a year’s time or two years’ time or whatever. I want to keep my body healthy… keep myself mentally sane and motivated to compete with the young guns.

“Everything that has followed Australia, particularly in the tournaments, has been a huge challenge and obstacle for me to overcome emotionally. I just needed time to weather the storm.”

McEnroe hit out at laws which currently bar unvaccinated people from entering the U.S. “These politicians are getting in the way too much – they did it in Australia,” said the three-times Wimbledon champion. “Let the guy come in and play in the U.S. I mean come on. This is ridiculous. You can agree to be tested. There’s got to be a way around this.”

Ivansivic said that Djokovic’s experience in Australia would have sent some players into retirement. “It’s very emotional,” said Ivanisevic. “It was a shit year, a tough year. Being there in Australia… for some people, they don’t recover. They will never play tennis. This was a big shock. It was a shock for me, and I was free. Imagine for him.

“It’s really heroic. He’s a great champion. This is the result. This trophy, this joy on Centre Court. It’s so beautiful. Maybe Biden will change his mind. A lot of crazy things are happening in the world. Every day something is changing.”

It’s a reminder that the U.S. remains one of the few countries which still bans unvaccinated visitors from entering. The ban remains in place despite the CDC seeming to accept that the Covid vaccines do little or nothing to prevent transmission, meaning the only benefit is to the vaccinated themselves. On the other hand, there are considerable costs in maintaining discriminatory practices against the unvaccinated, including hits to tourism and business and undermining of freedoms. To this we can add not having one of the world’s best tennis players at your tournaments.

The CDC recently published a consultation, due to close on September 6th, asking whether it should extend for an unspecified period of time the ban on unvaccinated visitors entering the U.S. This suggests the ban is not going anywhere anytime soon, then. But perhaps a form of exemption for Djokovic can be found.