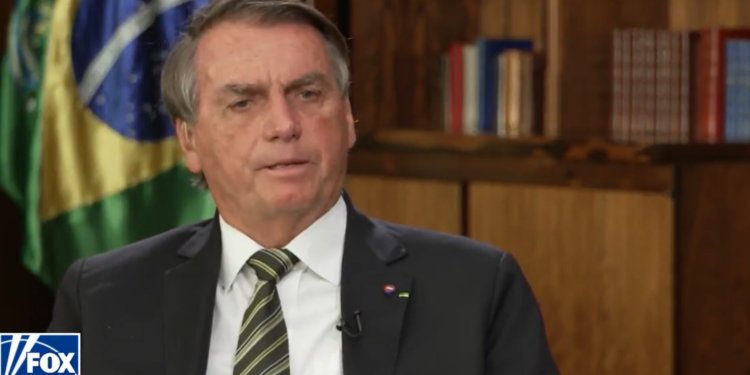 In an interview with Tucker Carlson, Brazilian President Jair Bolsanaro explains why he didn’t take the Covid vaccine and his regret of passing legislation to protect pharmaceutical companies from liability for the side-effects of their experimental vaccines. There follows a transcript of the interview.

Why didn’t you take the vaccine?

When the virus actually hit strongly in March 2020, people began to seek out the vaccine, of course, against the virus. And I too, of course, sought that medication because we began to see cases surfacing, started seeing the number of cases begin to go up.

Now someone who contracts the virus like I did, I mean, the vaccine doesn’t really help. I mean, you don’t take a vaccine if you have already been contaminated. The vaccine would be innocuous. You should rather take the medication. And in Brazil, of course, I studied the issue. I called other countries including in Sub-Saharan Africa and Brazilian doctors and physicians, because there were people out there who either did not catch the virus or when they did catch the virus the virus was not strong enough to send them to the hospital or to kill them.

And in Brazil we saw the emergence of two medications that began to be used more widely. I myself took them when contaminated.

But the global pressure all over the world from the media outlets, from the pharmaceutical companies, I mean, they were all against the early treatment, they actually focused on the vaccine.

I read Pfizer’s contract and one of the clauses said: “We shall take no responsibility whatsoever for any side-effect arising from the vaccine.”

I became concerned about that.

And Congress in Brazil decided to vote and pass a piece of legislation saying that Pfizer or any other pharmaceutical company would not take responsibility for any side-effect arising from the vaccine.

We also had information, including from the U.S. FDA, that several side-effects are likely to emerge this year or next year, in the foreseeable future.

So, the concern as mentioned by many doctors was that people who were infected by the virus were already immune and did not have to take the vaccine. That was my case, and that’s why I did not take the vaccine.

But I did purchase vaccines for all Brazilians.

I did not demand that people be vaccinated. I respected individual freedom. Each one was free to vaccinate or not.

And I believe that about 20% of the Brazilian population decided not to take the vaccine.

The Left was so worried about taking me out of office that they wanted me to take the vaccine. And I said, well, let me die, just let me die then, and choose my policy.

In South America we are the one country that best addressed the issue involving the need for vaccines.

And we very properly and adequately equipped our hospitals with equipment and medications. And I believe we have pretty much turned the page there.

And based on the studies that we have available outside of Brazil, many deaths could have been avoided had there not been so much pressure on the part of the mainstream media against early treatment.

Early last year I sent a team to Israel, a team of Brazilian experts to Israel, to look into the nasal spray solution they had developed on an experimental basis. I was highly criticised and we were unable to make progress in that negotiation.

So, you are technically allowed of course to take an experimental vaccine, which was the case in the past, but not the nasal spray?

I think you’re the only world leader to admit not taking the vaccine, that’s for sure. Why would Pfizer or any pharma company have liability protection against the side-effects of their own drugs, why would your Congress allow them to have that?

The population was appalled, they were desperate and afraid of the virus, especially the elderly population that also had some kind of disease or comorbidity, as a result of which Congress decided to pass a law to that effect.

We regret it really, because today in hindsight, you know, we see in studies, you know, conducted outside of Brazil, that perhaps two thirds of deaths could have been avoided in Brazil and in the world. I mean, take Sub-Saharan Africa. In Sub-Saharan Africa they take ivermectin to fight river blindness as well as hydroxychloroquine to fight malaria. And because the number of deaths was very low and the [IFR] was pretty low, one of the lowest in the world, the natural conclusion was that those medications could somehow also help fight the virus and the effects thereof.

We regret the pressure that took place and perhaps due to the economic power of pharmaceutical companies, I mean, they went on and invested in vaccines.

And today you see, you know, people who have taken the third, the fourth dose of the vaccine and they still contract the virus and die. And we have a lot of, say, stranded vaccines in Brazil. In Brazil, a considerable proportion of the population did not want to take the booster dose. I understand that to be their right. I support individual freedom.

As I said before, we are sorry. We regret all the deaths. But I believe many deaths could have been avoided through early treatment.

Much is said about lack of scientific evidence about those two medications for Covid. True, but they were useful for other things. I mean, very often drugs or medications are discovered by chance. During World War Two, for example, due to a lack of medication, soldiers were given coconut water in their vein and they survived.

As I said before, very often medications are discovered out of accident, or, you know, sheer chance, including medications against or to treat sexual impotence, for example.

Where do you think the Covid virus came from?

Well, allegedly from a laboratory on the other side of the world. But no deep investigation, or no in-depth investigation has been conducted.

It would seem that Covid has proved to be of interest for many people in the world. Many Heads of State ended up imposing their will and they felt the taste of dictatorship.

In Brazil, state governments felt the taste of acting as dictators, by mandating that people should stay at home, and shutting down shops and not allowing people to go to school if they had not been vaccinated. So they felt that power in their hands, they could do everything during Covid. And more importantly, when it came to the public weal itself, I mean, many things could be purchased by governors and mayors, although many of them or the vast majority are honest, they were nevertheless able to buy just about anything without much of a sense of responsibility.

So that taste of not being accountable for your actions during Covid is something that flourished among many top officials in Brazil.

Why Does the BBC Censor Content That Offends Muslims, But Not Christians or Hindus?