Where Are the Vaccine Death Signals in Excess Mortality Data? 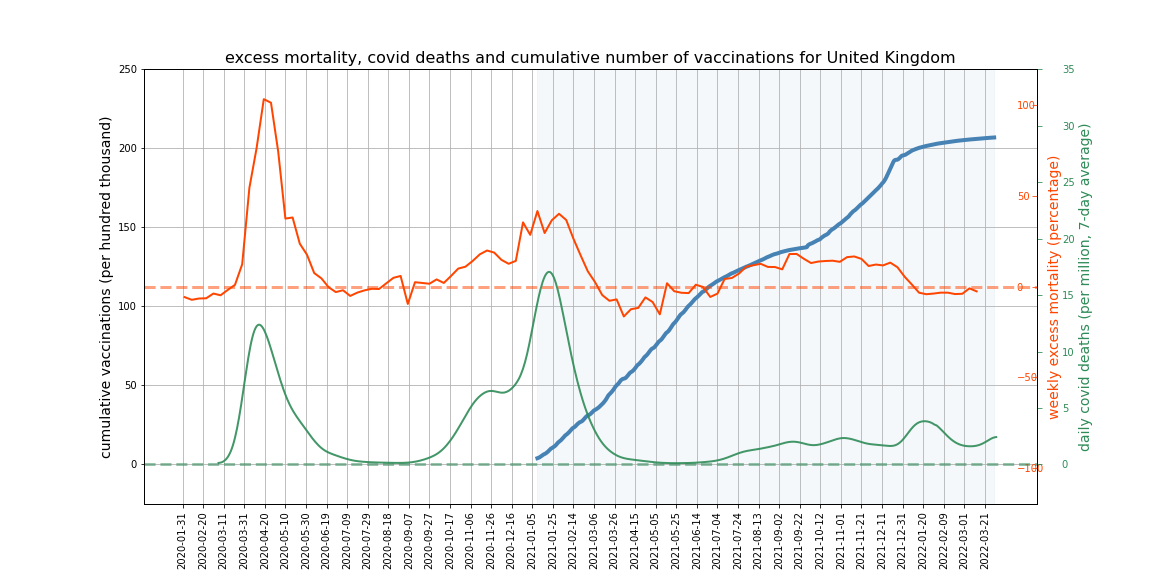 I wrote recently that, with over 2,000 deaths reported to the Yellow Card reporting system as adverse events following Covid vaccination, the true figure of U.K. deaths from short-term vaccine injury may be around 20,000. This is allowing for an under-reporting factor of 10, which, I argued, doesn’t seem unreasonable given analysis of an Israeli survey of booster recipients, which found under-reporting factors of hundreds or thousands for many adverse effects when compared to U.S. VAERS reports. The under-reporting factor for hospitalisation was 120, meaning 120 times more people reported being hospitalised as a result of their booster in the survey than in VAERS.

While it might seem that 20,000 deaths as a result of short-term vaccine injury should show up in overall mortality data, I argued that it is in fact more than possible that this number of deaths may be obscured by, for example, Covid waves and the subsequent troughs of mortality displacement, where people who would otherwise have died during those weeks died early due to Covid.

Take the example of the Faroe Islands. The Faroe Islands has a population of around 60,000 people, which is about 1,000 times smaller than the U.K. population of around 67,000,000 (using round numbers to keep the maths simple). Given 20,000 U.K. vaccine deaths, and assuming the U.K. and Faroe Islands populations are broadly comparable, we would expect around 20 vaccine deaths in the Faroe Islands, i.e., 1,000 times fewer than the U.K. If those 20 deaths are spread evenly over the 15 months of the vaccine rollout then you’d expect an average of 1.3 deaths per month or 0.3 per week. The U.K. experiences around 10,000 deaths in a normal week on average, so we can suppose the Faroe Islands experiences around 10 deaths in a normal week. It’s easy then to see that 0.3 additional deaths per week are unlikely to generate a noticeable signal among the usual 10. If the average number of deaths goes up from 10 to 10.3 per week, it’s hardly going to stand out in the statistics.

Another way of saying the same thing is that 20,000 U.K. vaccine deaths spread over 15 months works out at around 300 deaths per week, which is only a small percentage (3%) of the around 10,000 deaths per week that normally occur in the U.K. That kind of signal (10,300 instead of 10,000) will easily be lost amid Covid waves and mortality displacement as well as deaths resulting from lockdown and lack of access to healthcare. Even if some of the deaths bunch up around certain points in the rollout, such as when older people are receiving large numbers of doses, the numbers are still relatively small compared to weekly ordinary mortality (even if they are shockingly large in the context of vaccine injuries). It’s also worth noting that VAERS data show Covid vaccine death reports spreading quite evenly throughout the rollout.

As it happens, the Faroe Islands does show a slight increasing trend of excess mortality since the vaccine rollout began (see below). However, it’s not what you could call an unmistakable signal.

The graphs below show Covid deaths, excess deaths and vaccine doses for 42 countries, mostly in Europe but also Australia, New Zealand and Israel. In many of them a broad rising trend in excess deaths is discernible since the vaccine rollout began, with some more pronounced than others. The large impact of Covid waves and mortality displacement is also clearly visible. In many of the countries, the rollout (particularly to the elderly) was done during the winter 2020-21 Covid wave, obscuring a potential vaccine injury signal, and the subsequent mortality displacement has a similar effect. In Australia and New Zealand, the very mild winter ‘flu season’ (when flu was not around) during the rollout in 2021 resulted in low excess deaths in some of the colder months such as September, also obscuring a possible signal – though notably the winter months of June and July and, in New Zealand, August did not have the low mortality you would expect in a winter without flu. In the northern hemisphere, excess mortality in the winter just past was depressed by the mildness of Omicron, again obscuring a possible signal.

It appears there is a limit to what we can expect this kind of mortality analysis to show. More sophisticated analysis might try to adjust for the impact of Covid deaths and mortality displacement on excess deaths, and would break down the data by age and take cause of death into account. However, it’s not obvious that this kind of analysis could succeed in accounting accurately for all relevant factors, or would not become overly dependent on questionable assumptions – such as that all ‘Covid deaths’ are deaths from Covid, or what the correct extent of mortality displacement is.

What I think can be said with confidence based on the charts below is that the mortality data are compatible with the assumption that the true number of vaccine deaths is around ten times the number reported to the adverse event reporting systems. While the data in some countries may show clearer signals, they don’t in all countries. However, they are nonetheless compatible with the worrying signs seen in the adverse event reporting systems and elsewhere.

What we really need are autopsies carried out with the potential for Covid vaccine injury in mind and proper investigations of the safety signals from the adverse event reporting systems. Any signals that do appear in overall mortality – such as the unexplained rise in non-Covid deaths since summer 2021 – should also be taken seriously, given how severe they have to be in order to show up amid normal mortality and confounding factors.