The French are Rebelling Against Petty Covid Mask Rules 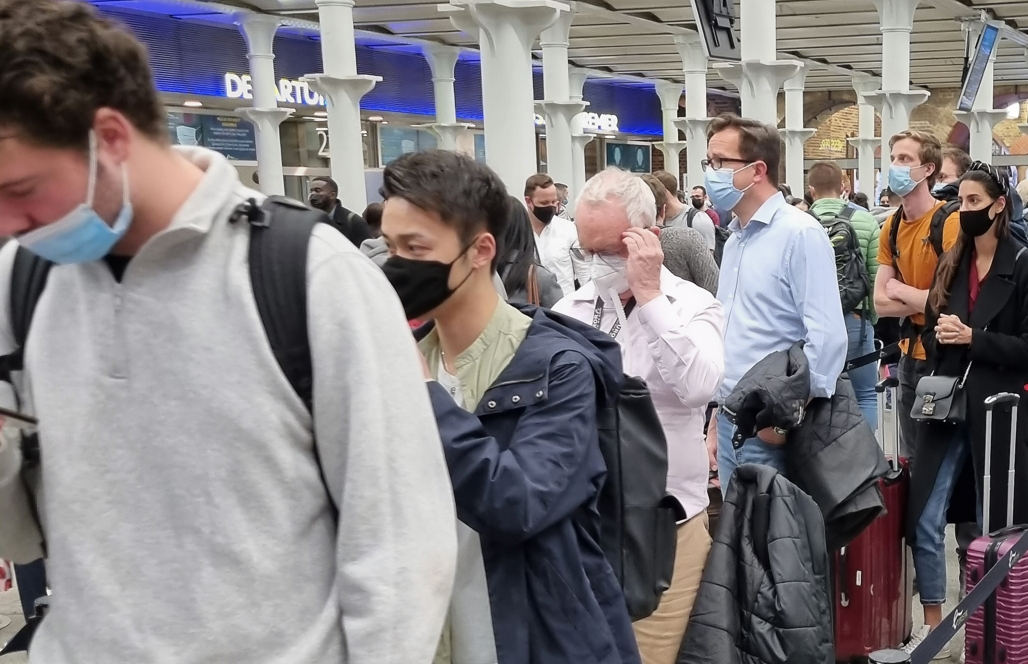 Daily Sceptic reader Chris Bullick has travelled to France this week and found a population moving on from the petty pandemic rules whether their Government wants them to or not.

Well, that much agonised over third jab was a waste of time. St. Pancras railway station was a complete zoo. The French border official scanned my passport in the usual insouciant way and waved me through. The other three members of our party did however have their documents scrutinised. I was less than delighted when they suggested that they hadn’t bothered as I “just looked way too old to be unvaccinated”.

They certainly get you in the mood at St. Pancras. With a train for Paris and one for Amsterdam both leaving at six on a Friday evening, the place was slammed. There was a 200 metre queue for the Eurostar down the station concourse. This had a ‘mask checkpoint’ 100 metres in, where Eurostar staff were commanding their passengers to don masks. Which of course everyone sheepishly did – except for me. I was having none of it. “Tell me it’s a legal requirement,” I said, as all the other unmasked passengers heading elsewhere rushed past. “It’s a Eurostar requirement,” they repeated. “But not a legal requirement,” I stated. “So I shan‘t be wearing one,” and walked on unmolested.

However, the passenger behind me made a mis-step. “I’m sorry, I don’t have a mask,” he shamefully confessed. They pounced. Never apologise, never explain. Sent packing off to the shops to buy one, he returned clutching one of those Chinese paper masks currently polluting every major river in the world and costing about one pence to manufacture. To his girlfriend: “It was the last one and cost me £5.” Why do people put up with this utter charade still? If only half of them challenged it they would stop it.

Okay, so it may still be requirement of French law to wear masks on public transport, but St. Pancras is not in France. They do it I guess because it suits them to do it while they process you. They know it would look absurd to tell people to don masks mid-Channel, so they enforce where they can, and passengers are most vulnerable to coercion. Everywhere there are Eurostar signs worded: “You must wear protective masks on our stations and on our trains.” The words “protective” and “our” show you just how much blatant lies are now tolerated by the sleepwalking people.

After that we never wore masks again, not in the Eurostar, the Gares Du Nord and Lyon (patrolled by unmasked cops) the Paris Metro (still 98% compliant, however) or the SNCF TGV, and unlike at St. Pancras, no-one told us to. Even the resort (Val Thorens) is mask free. In our first two days we haven’t seen a single mask anywhere – despite them being legally required on, for instance, ski lifts. It was a very different picture for my daughter, who was in the same resort in December. Every shop, café, bar and restaurant demanded and scrutinised vaccine passports. While this level of enforcement doesn’t seem very French, apparently these hospitality venues were obliged to send all the personal data they had collected daily to the Government or face the threat of massive fines.

Given the field day the world’s petty bureaucrats, busybodies and bourgeois bullies have had with Covid, it feels like something of a victory to come to France and see things change so fast for the better. We know the French are different, and their enthusiasm for Covid-related coercion was a disturbing thing to see, but I have a feeling that the French people decide what to do in their own time. When they have decided they’ve had enough, the Government doesn’t really have a say in it. We Brits could surely learn from that.

Chris Bullick is CEO of the Pull Agency.