When it Comes to Managing the Pandemic, is Australia Bottom of the International League Table? 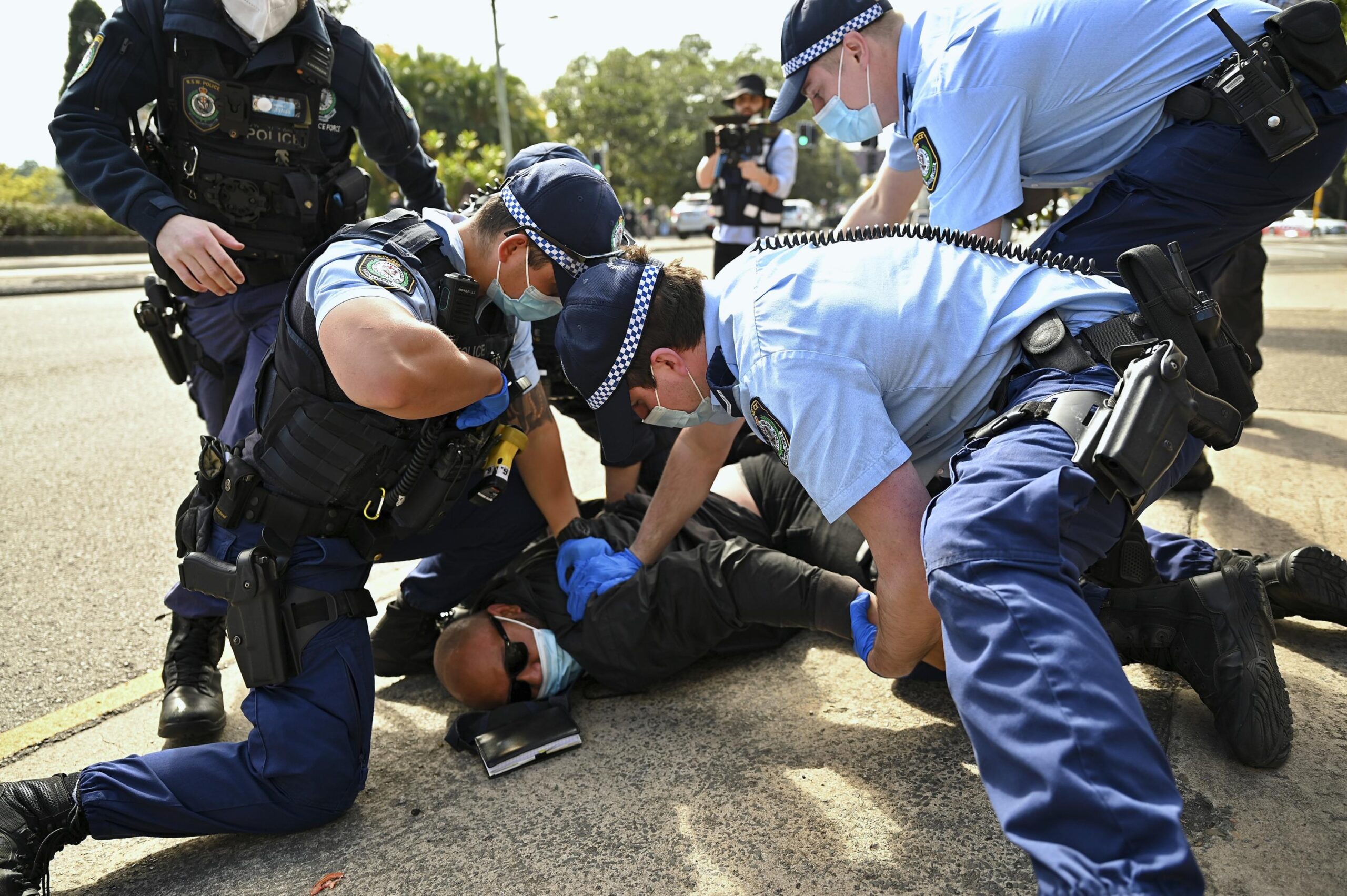 We’re publishing a guest post this morning by Steve Waterson, Commercial Editor of the Australian. He is concerned that a myth is quickly growing in Australia that the country managed the pandemic rather well. As he points out, that’s only true if you ignore the curfews, the house arrest, no visitors, toilet paper battles, five-kilometre limits, an hour a day of exercise, closed borders, internationally and internally, closed pubs, restaurants, shops, parks, gyms, beaches and golf courses.

At a Sydney restaurant last month I found myself sitting next to a woman I’d never met before, the wife of one of the other guests.

We’d already endured the unattractive, passive-aggressive, American-style formulation of “I need you to check in”, from one of the staff, who then “needed” us to wear a mask for the five metres and six seconds between the entrance and our table.

My old-man mutterings about a time when people began such requests with “Would you mind …” or “Could I trouble you to …” were interrupted by my cheery new dining companion. “You shouldn’t really be complaining,” she smiled. “Australia has done better than anywhere else in handling the pandemic.”

Heroically resisting the urge to up-end the table, I made a few polite observations in response, until my wife gave me her “nobody needs another rant from you” look and piloted the conversation into more tranquil waters.

It’s barely two years since the Covid lunacy first infected us, but already its history is being rewritten. In newspaper columns and on television, opinion-laden pundits are patting the enforcers and the obedient on the back, reassuring themselves with this dazzling myth that we managed our pandemic with admirable wisdom and efficiency.

Lacklustre politicians are understandably keen to embrace and promote this view, starting with the Prime Minister’s mantra that we “saved 30,000 lives”. Did we, though? Figures emerging from the few places that didn’t impose life-changing restrictions on their populations suggest they made next to no difference.

At best we tacked an extra couple of months on to the lives of some very old people in nursing homes, then immediately cancelled whatever benefit that afforded them by turning their last weeks into a lonely, bewildering, miserable slide towards the grave when they were forbidden to see family and friends and were attended by carers dressed like astronauts. They’re mostly dead by now, but I trust they slipped away with a message of gratitude on their lips.

Have we forgotten what we went through? Is there a societal equivalent of the mechanism by which we suppress the memory of acute pain?

Before the narrative is embedded too deeply to remove, thereby permitting the same ludicrous weapons to be deployed when the next crisis occurs, perhaps we should remind ourselves of some of the highlights of our exemplary Covid performance.

Oh yes indeed, we got through the pandemic better than anyone else, as long as you’re prepared to ignore the curfews. The house arrest. No visitors. Toilet paper battles. Five-kilometre limits. An hour a day of exercise. Closed borders, internationally and internally. Closed pubs, restaurants, shops, parks, gyms, beaches, golf courses.

What else? No hospital or home visits to dying parents or children. No funerals or weddings. No holidays, reunions, gap years. No school or university. No jobs. Small businesses destroyed. A mental-health crisis. Surgeries and medical screenings suspended.

That’s probably enough to be getting on with. Except to note that the whole mad exercise by now will have cost us almost half a trillion dollars. If that’s success, you’d hate to see what failure looks like.

And it’s still not over. Britain and other European countries, much harder hit than we ever were, are lifting all their Covid-related rules; but here, time ran out this week for hundreds of lowly supermarket employees who didn’t want to be vaccinated, punted from their jobs even as unvaccinated customers were flooding, maskless, back into their aisles. Their vaccinated colleagues in the retail sector, meanwhile, are recommended by state governments to continue to wear masks “to protect vulnerable people who must access these premises and services”.

This novel notion that ordinary citizens are obliged to make whatever sacrifices pop into our health bureaucrats’ twisted brains to save their vulnerable neighbours is getting a little sinister. There’s a small number of people I’d feel obliged to protect if they were in danger – family, a few friends, some of their less obnoxious children – but I assume, and expect, that everyone else will similarly see to themselves and their own. We pay substantial taxes to ensure the state takes care of those in genuine need, and my responsibility to the rest of Australia is to behave myself and do as little harm as possible.

It’s a shame if there are people so fragile that contracting Covid is a death sentence, but that’s life in all its savage unfairness. Perhaps I’m an unfeeling monster, but I’m puzzled that their frailty entitles them to have all 25 million of us accommodate their needs, rather than take the appropriate precautions themselves. Is it genuine selflessness that motivates the shoppers who continue to wear masks, or fear? Or even, as I’m starting to suspect, ugly faces?

When America’s doomed experiment of Prohibition ended in 1933, there were counties in many of the Southern states that dreaded the return of alcohol to their towns, and they are still “dry” to this day. The same appears likely to ensue in parts of this country, with vestigial, nonsensical regulations set to remain in force in perpetuity.

How else can we explain the lingering idiocy of the mask rules? In NSW they are still required in “high-risk settings”, such as on public transport. How sitting next to someone for five minutes on a bus or ferry presents a higher risk than sitting next to a stranger for two hours in a cinema defeats me, but it was never about logic, was it? In Victoria, masks are no longer required in most indoor settings, but you still face a fine if they catch you outside the house without one in your pocket.

Pity the poor politicians: it’s so very, very hard to let go, particularly if you’re a certifiable cretin. There are no density limits in our parliaments.

One consolation is that we’re not in freedom-loving Canada, where the measured response to the truckers’ anti-vaccine mandate blockade of Ottawa was to cancel their driving licences, freeze their bank accounts and seize their pets. With luck the truckers will never bring their semi-trailers to the capital again. It would be amusing to see how long the government could go without their maple syrup and poutine, eh? Or in PM Justin Trudeau’s case, without tins of shoe polish for when he’s putting on his party face.

Elsewhere, world affairs reveal how flimsy are the rights and institutions we take for granted, and put this fading disease and our response to it into perspective. Let’s hope we can one day rule a line under these two years of stupidity and focus on more important matters.

Should that day ever arrive, and you find yourself feeling unmoored, nostalgic for the days when ridiculous politicians and their lickspittle minions blew their meddling noses all over your private business, remember the Western Australia fun park has just reopened (the state was shut down for one case last year, but opens now with thousands of cases every day; but again, it’s not about logic, is it?).

Ignore the sneering insults thrown your way in recent months by WA’s profoundly unimpressive Premier, jump on a plane and head west for a taste of the golden era of government overreach, where lockdown remains a thrilling possibility!

Getting in couldn’t be easier: if you’re double-vaccinated, have a valid G2G pass, take a rapid antigen test, carry proof of vaccination, wear a mask everywhere indoors, you’ll be welcomed and encouraged to savour the touristic wonders of the state. My mistake, sorry: that only applies to people from the Democratic Republic of the Congo, Venezuela or any other dump around the world. Interstate Australians will be denied entry unless they can show they’ve had a third vaccine shot.

WA’s obstacle course is moronic, sure, but don’t expect it to disappear in a hurry. Instead rejoice in the inventiveness of our highly placed buffoons, who can be relied upon to deliver a series of comic masterpieces to lift our spirits in troubled times.

How Many Actual Scientists Were Involved With the Latest Apocalyptic IPCC Climate Report?