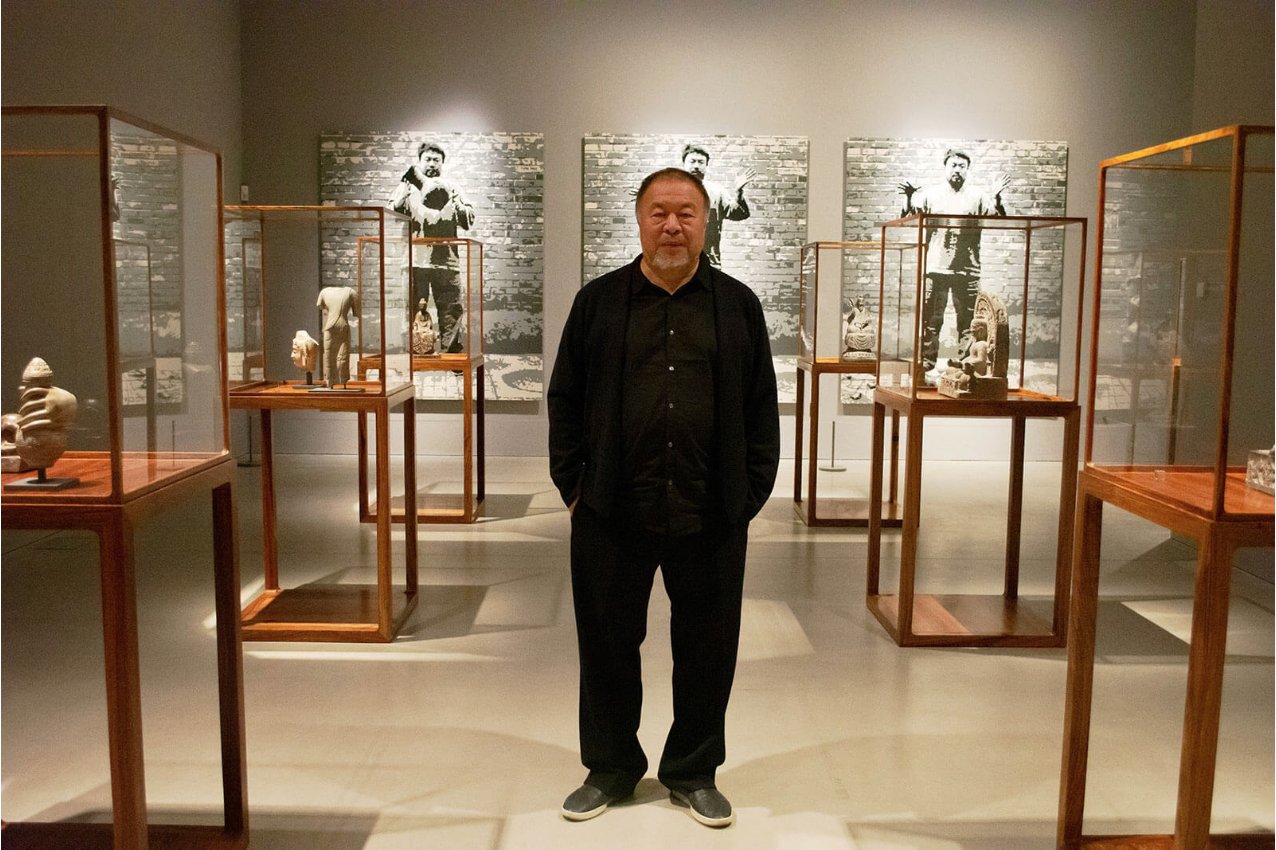 Last week, my wife and I visited the Ai Weiwei exhibition, “The Liberty Of Doubt“, being held at the Kettle’s Yard art gallery in Cambridge. For those who are unfamiliar with Ai Weiwei, the best way to describe him is as an artist and activist: his recently published memoir, 1,000 Years Of Joys And Sorrows, is a wonderful book, combining a potted history of China from the early 20th century up to the current day with recollections from his father’s and his own life.

The art on display is definitely contemporary and, in some cases, quite challenging: representations in marble of such everyday items as a Styrofoam takeaway box, iPhone case and even a sex toy tested my art appreciation mettle! However, the skill with which these objects are rendered is unquestionable and the ambition of some of the pieces is on a scale that can best be described as mind blowing. His “Dropping a Han Dynasty Urn” at this exhibition (depicted above behind the artist), rendered in thousands of Lego pieces, is both ingenuous and controversial.

But as well as being a wonderfully inventive creative, billed as China’s foremost living artist, Ai Weiwei stands apart from his peers because of his outspoken defence of human rights, and in particular his championing of free speech and expression. As a man who says what he believes and refuses to be quiet he has, for many decades, been in conflict with the Chinese Communist Party (he currently lives in Portugal, though keeps a base in Cambridge, where his son goes to school, and a studio in Berlin). That conflict has not come without a personal cost, one that most of us would be unwilling to pay. He has been beaten by the police, severely enough to have suffered brain damage (in fact, one of his new pieces in the exhibition is a representation of the MRI performed after the beating), and he has been held, initially without charge but then on the grounds of tax evasion, in conditions of extreme confinement and loss of all personal autonomy. We can say honestly that he has suffered for his art.

And then there’s COVID-19. Given his pronouncements on the origins of the virus (it’s “obvious it isn’t natural… it’s something that leaked”) and his unabashed comments about vaccine mandates (“For or against the vaccine should be individuals’ autonomous decision, made for themselves and according to their social interaction, so society does not have the right to make vaccine compulsory”) it’s clear that his commitment to natural human rights is unwavering. Ever the individualist, Weiwei made his position about personal autonomy clear: “Regardless of the type of society, individuals are entitled to accurate information and then they can voluntarily collaborate with the Government or not. This decision should belong to individuals.” These statements are more than simply words, they drive his art which, in turn, appears as explicit and public manifestations of his commitment to freedom. Pieces showcased in the current exhibition include Handcuffs and Marble Toilet Paper (yes, it is a roll) which he made in 2020 as a “symbol of panic and distrust”.

So, given the totality of Weiwei’s output, the sheer essence of the man, it was extraordinary to witness the behaviour of the public while in the galleries. Nearly 100% of those we saw were wearing masks. While viewing the work of a man who has spent his life poking the bear of authority, and whose work is deeply political and celebrates the rights of the individual, the visitors seemed oblivious to the irony of sporting the most public expression of coercion and compliance. Perhaps these masked admirers of Ai Weiwei the artist hadn’t made the connection with Ai Weiwei the activist and lockdown sceptic; or they felt uncomfortable not demonstrating their membership of the cult of conformity (or perhaps they didn’t care). Either way, the cognitive dissonance was strong and left my wife and I both amused and frustrated, yet bemused: why should Cambridge, a highly esteemed centre of learning and academic excellence, be so full of fearers, adherents of the Cult of Covid and the useless face mask? It’s almost as if there’s an inverse relationship between IQ and old-fashioned common sense.

For those not familiar with Ai Weiwei, this is his life.

Born in 1957, in Beijing, his father, the poet Ai Qing, was labelled a “rightist” in 1958 and Ai and his family were exiled, first to Heilongjiang, in north-eastern China, and then soon after to the deserts of Xinjiang, in north-western China close to the Borth Korean border.

Following the death of Mao Zedong in 1976, Ai Qing was rehabilitated and the family moved back to Beijing. Ai enrolled at the Beijing Film Academy and was one of the original members of the ‘Stars’ group of artists.

He moved to the United States in 1981, living in New York between 1983 and 1993. He briefly studied at the Parsons School of Design. In New York, Ai would discover the works of Marcel Duchamp and Andy Warhol. Returning to China in 1993 to care for his ailing father, Ai contributed to the establishment of Beijing’s East Village, a community of avant-garde artists. In 1997, he co-founded the China Art Archives & Warehouse (CAAW), one of the first independent art spaces in China.

He began to take an interest in architecture in 1999, designing his own studio house in Caochangdi, on the northeast edge of Beijing. In 2003, Ai started his own architecture practice, FAKE Design. In 2007, as a participant of documenta 12, Ai brought 1,001 Chinese citizens to Kassel as part of his Fairytale project. In 2008, for the Beijing Olympics, Ai and the Swiss architecture team of Herzog and de Meuron designed the National Stadium .

In 2010, Ai covered the floor of the Turbine Hall at Tate Modern with 100 million porcelain sunflower seeds.

In 2011, Ai was arrested on charges of tax evasion, jailed for 81 days, and then released. The Government kept his passport and refused him any other travel papers.

In 2012, Ai Weiwei was awarded the Václav Havel Prize for Creative Dissent by the Human Rights Foundation.

In 2015, following the return of his passport, Ai moved to Berlin where he maintained a large studio in a former brewery. He lived in the studio and used it as the base for his international work.

He was awarded the Ambassador of Conscience Award by Amnesty International for his actions in support of the defence of human rights.

In 2019, he announced he would be leaving Berlin, saying that Germany is not an open culture. In September 2019, he moved to live in Cambridge, England.

As of 2021, Ai lives in Montemor-o-Novo, Portugal. He still maintains a base in Cambridge, where his son attends school, and a studio in Berlin. Ai says he will stay in Portugal long-term “unless something happens”.