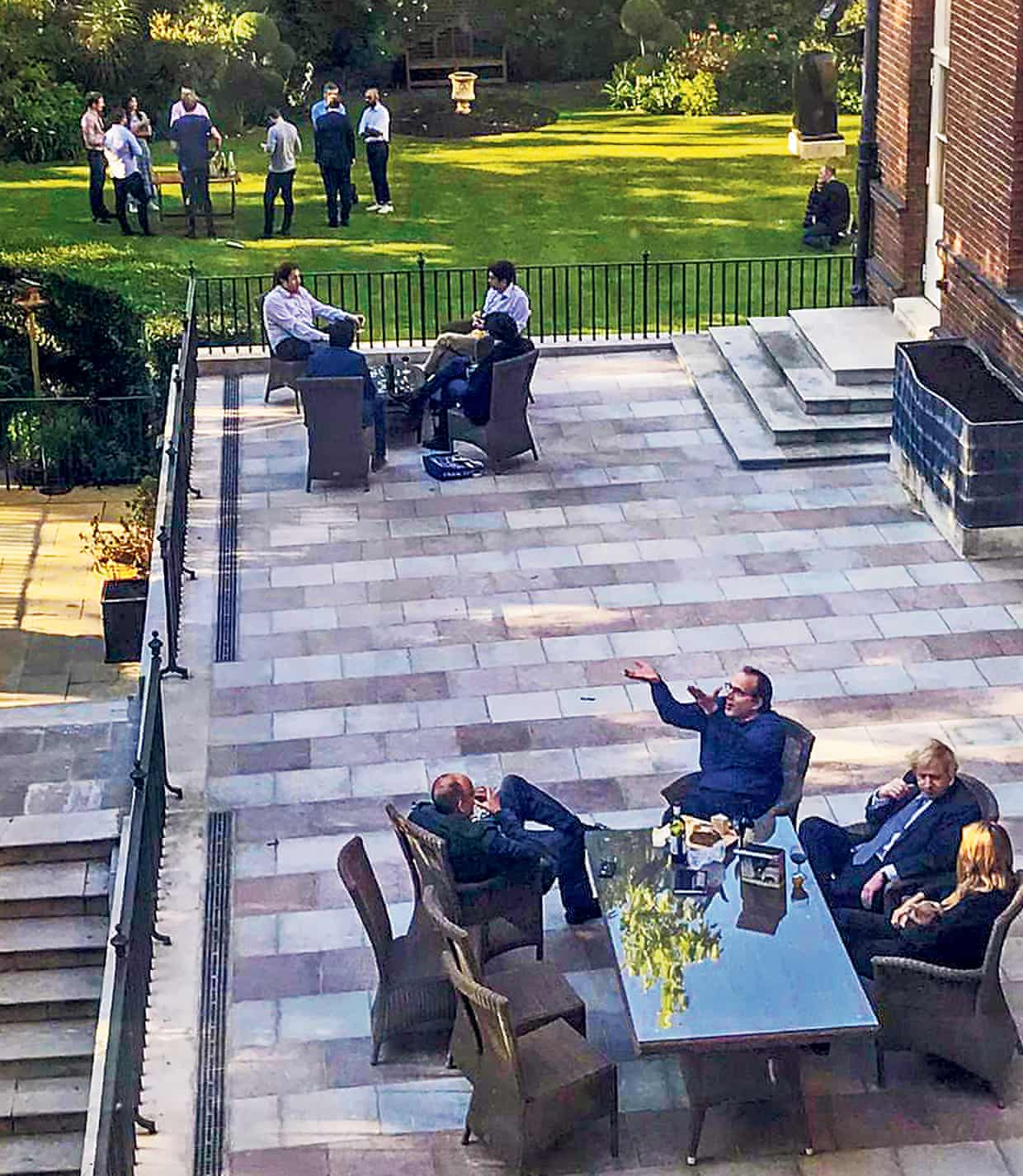 A photo (pictured) has emerged revealing that Boris Johnson and members of his staff attended a close-contact social gathering in the Downing Street garden during May 2020. The image appears to show the attendees violating numerous Covid restrictions that were in place at the time, such as rules relating to social distancing and household mixing, with the photographic evidence also challenging the Government’s original claim that this was, in fact, a work meeting. The Guardian has the story.

Johnson has been pictured with wine and cheese alongside his wife and up to 17 staff in the Downing Street garden during lockdown, raising questions over No. 10’s insistence a “work meeting” was taking place.

The photograph was shared with the Guardian following No 10’s denial last week that there was a social event on Friday May 15th 2020 including wine, spirits and pizza inside and outside the building. Johnson’s Spokesman said Downing Street staff were working in the garden in the afternoon and evening.

However, the picture raises questions over that assertion. Bottles of wine are in evidence, there is a lack of social distancing and 19 people are gathered in groups across the Downing Street terrace and lawn.

At the time social mixing between households was limited to two people, who could only meet outdoors and at a distance of at least two metres. In workplaces, guidance said in-person meetings should only take place if “absolutely necessary”.

Angela Rayner, the Deputy Leader of the Labour party, described the picture as “a slap in the face of the British public”, adding: “The Prime Minister consistently shows us he has no regard for the rules he puts in place for the rest of us. Alleged drinking and partying late into the evening [at No. 10] when the rest of us were only recently getting one daily walk.”

The Prime Minister has faced a string of allegations of partying and socialising in No. 10 while Covid restrictions were in place. He was forced to order a civil service inquiry, though its head stepped down on Friday over allegations of his own Christmas party.

The past week has been described as the worst of the prime minister’s premiership, with a major rebellion by Conservative MPs over Covid regulations followed by a historic byelection defeat and the shock departure of the Brexit Minister, David Frost.

In the new image shared with the Guardian, Boris Johnson and Carrie, who appears to be holding their newborn baby, are seen sitting around a table with a cheeseboard and wine, along with two people believed to be a civil servant and an aide. Last week No. 10 said Johnson was working in the garden before retiring to his flat at 7pm.

On that day Matt Hancock, then Health Secretary, had given a 5pm press conference urging people to stick to the rules and not take advantage of the good weather over the May weekend to socialise in groups.

At the time schools were still shut and pubs and restaurants were closed, with strict controls on social mixing. More people had been allowed to return to their workplaces, but guidance said social distancing of two metres should be followed at all times and “only absolutely necessary participants should attend meetings and should maintain two metre separation throughout”.

The Guardian reported last week, as part of a joint investigation with the Independent, that Johnson had been present for an alleged social gathering in Downing Street on 15 May 2020. Sources said the Prime Minister had spent about 15 minutes with staff, telling an aide inside No. 10 that they deserved a drink for “beating back” Covid.

Insiders claimed about 20 staff drank wine and spirits and ate pizza following a press conference on that day, some in offices inside No. 10 and others going into the garden. Some staff stayed drinking until late into the evening, they alleged. The sources described the event as having a “celebratory” feel given the initial loosening of some restrictions and the good weather in London that day.

Touch Christmas and the Blond Gets It