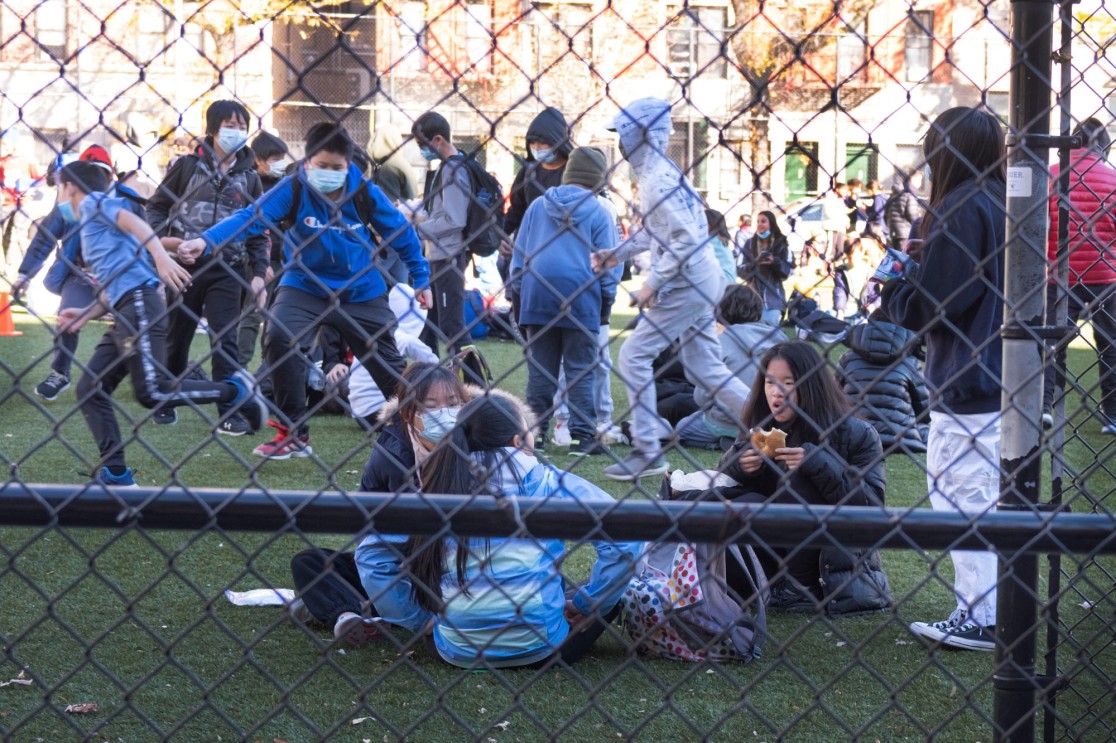 In New York state, primary school children have been forced to eat their lunch outside despite plummeting temperatures, while students in California are following the same protocol and have endured rainy weather. School districts that are introducing these rules are doing so to help prevent the spread of Covid on the premises. The Mail has the story.

Elementary schools from New York to California are forcing students to eat outdoors in an effort to protect them from Covid, despite plummeting temperatures in the Empire State and rainy weather on the west coast.

And now, parents are lashing out against the school districts that are imposing those social distancing rules.

In New York City, elementary school students were forced to eat their lunches in cold weather on Wednesday.

“It’s getting a little ridiculous at this point,” a mum at MS 104 in Manhattan told the New York Post.

In Brooklyn, another mum of a student at a Park Slope elementary school said her child began complaining about eating in the ever-dropping temperatures, having done so since the beginning of the school year back in late August.

“We’ve heard no plans to bring them inside anytime soon,” she told the New York Post.

“In fact, they are still asking for parents to give the school their Fresh Direct bags to create seating pads. It doesn’t sound like they’re going in.”

In New York, the Department of Education has allowed principals to come up with their own lunch plans for this school year.

While not every school in the city is forcing students to eat outdoors, every school’s lunch plan must comply with social distancing rules, meaning more students are taking their meals outside.

Kids in balmier California are also being made to eat outside. And while there’s less chance of freezing weather, those youngsters must contend with soggy lunches as they’ll be forced to eat outside if it rains.

“My kid has his rain gear, he has his rain jacket,” said Tristan Leong, a parent of two kids in the Davis, California school district.

“Everyone kinda scratched their heads and said wait a minute, there’s no cover for them,” Leong said, according to ABC10.

Leong brought the issue up to school board members Thursday night after receiving an email last Monday from his child’s principal, saying that students must eat outside due to Covid restrictions, while adding that they should have rain coats, warm jackets and even a change of clothes too when going to school.

“It’s totally just common sense, it shouldn’t be political at all, this is not a right or left issue, this is just let kids eat lunch normally,” Leong said.

The Davis Joint Unified School District refused to comment on the matter on camera, according to ABC10, however the news outlet did receiving a statement that was sent out to families district-wide.

“In consultation with the Yolo County Public Health Officer, Dr. Sisson, we believe the health risk to students is greater eating indoors unmasked than eating outdoors in inclement weather, under a covered area for a short period of time.”