Confessions of a Mask Wearer 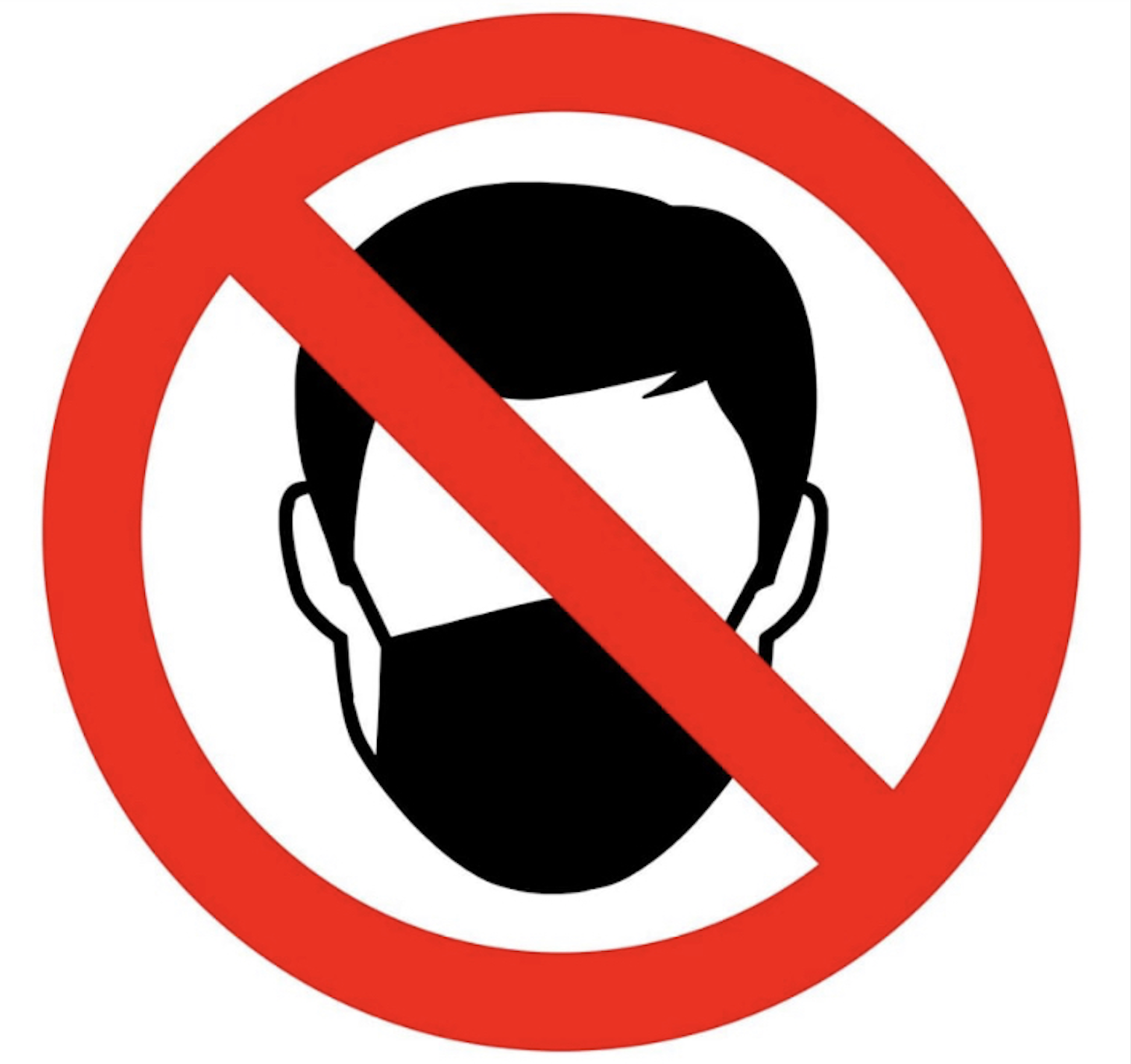 A reader who wishes to remain anonymous has sent us this – an account of how they’ve been inspired by my no-more-mask declaration to follow suit.

I applaud Toby’s decision to stop wearing a mask from June 21st. Having made the same decision, I thought I would jot down some reflections on the wearing and the non-wearing of masks in these irksome times.

Perhaps more than anything else over the past 15 months, it has been the masks that have disheartened and dismayed me. The sight of hordes of mask-wearing covid zombies shuffling around the high street on a bright sunny day is a scene of bleak dystopian misery and I can only hope that future generations will regard evidence of this phenomenon with a combination of bewilderment and hilarity. Sceptics will be familiar with the arguments against masks – they don’t work; they are chiefly a psychological tool to remind us that “there’s a pandemic on”; they are a superstitious comfort blanket for the terrified and a symbolic totem for the zealous virtue signallers. I suppose at this stage in the game you either get it or you don’t, so I’m not going to dwell on the case for the prosecution.

But here’s the thing – despite hating the fetid and otiose rags with every fibre of my being, up to now I too have been wearing a mask when required! I know full well that many people have refused to wear one from the outset, and I admire their integrity. But I myself have been an abject coward. I have worn a mask in shops; on the train; when picking my son up from school. Yes, I have indulged in mild acts of subversion – the occasional baring of the nostrils; the chin dangle on the train while drinking a bottle of water that I made last for an hour. But deep down I knew that these petty acts of defiance, like a truculent schoolboy slouching around with his shirt untucked, were pathetic and ineffective.

So why did I comply? I justified it by believing that I had no choice but to obey the law. However unjust we might find any given statute, I lectured myself pompously, those of us who believe in the rule of law and the social contract that underpins our democratic society are duty bound to follow the law of the land. Otherwise the whole system will founder.

Did I really believe this balls, though? When a law is unjustified and harmful, do we not have a moral duty to disobey? And I always had the option of claiming exemption on the grounds that wearing a face mask causes me severe distress. The word “severe” is maybe a bit of a stretch, but the forced compulsion to wear a mask has certainly made me feel miserable, humiliated and subjugated on a daily basis (which I suspect was rather the point).

If I’m really honest, the true reason I wore a mask was that I was fearful of being challenged and I found it much easier to go with the flow. There, I said it. It is a shameful thing to admit, but I have sinned: mea culpa, mea mask-wearer culpa.

My first rebellion took place at the school gates. Since the winter, all parents have been instructed by my son’s primary school to wear masks on the school grounds. I went along with it at first, partly due to my gratitude that in an increasingly mad world the school’s policies had been fairly sensible on the whole and have spared the children some of the worst excesses of Covid lunacy. It hasn’t been easy for the teachers and I didn’t want to make things harder for them by kicking off about something that the majority of parents, sadly, probably wanted.

But a couple of months ago I finally decided to speak out and I wrote to the headteacher to query why this policy had been instituted in the first place; why it was still in place, given the low cases/deaths/hospitalistions, etc.; and under what conditions it would be eventually be lifted. I cited various pieces of evidence showing that the transmission of SARS-CoV-2 by asymptomatic individuals in an outdoor setting was vanishingly rare and that the efficacy of non-surgical masks in any setting whatsoever was far from proven. I suggested that it was not healthy for children to be confronted with this unremitting reminder that we are living in a state of constant fear and that adults are to be considered as vectors of disease and contamination. I resisted using words like “pantomime” and “charade” but you get the general idea.

I imagine this philippic was received with about as much appreciation as a turd in a jiffy bag and the reply, polite but faintly aggrieved, was much as you’d expect. None of my substantive points were addressed; the response was essentially “we need to stay safe and keep the school open and not everyone has been vaccinated yet so wear a mask”. Or to boil the matter right down to its bare bones: “wear mask because… Covid”.

Following this unsatisfactory response my innate stubborness kicked in and I have stopped wearing a mask on the school premises. I rather ostentatiously make sure to keep myself well apart from the mask wearers, so as not to infect them with my asymptomatic yet potentially deadly presence. I stand alone and silent, a strange grumpy man with shockingly exposed nostrils, usually wearing my headphones or reading a book to signal my exiled status. Nobody has ever challenged me or commented on my masklessness. In fact, other parents do sometimes sidle up and talk to me; I appreciate these small acts of kindness towards the unclean.

I briefly entertained the preposterously grandiose fantasy that my small act of rebellion would spark an Emperor’s New Clothes-esque awakening and that, inspired by my example, a critical mass of other parents would also cast off their masks. Perhaps I would be like the boy at the end of Dead Poets Society, the one who clambers onto the desk and calls out “O Captain! My Captain!” in solidarity with Robin Williams and inspires half the class to rise and do the same! Alas, you won’t be surprised to learn that no such thing came to pass. The weeks and months have gone by and to this day I remain the only bare-faced parent. Most of the others now undoubtedly think I am a self-important tosser.

You certainly can’t accuse me of any sort of consistency, though, since while carrying out this protest I nonetheless continued to wear my mask in shops and on train journeys. But after the announcement that “Freedom Day” was to be suspended I decided that enough was enough. That was my Peter Finch moment: mad as hell and not going to take it any more.

So I now enter the local supermarket entirely sans mask – not dangling under my nostrils or my chin, or replaced by a piratical bandana, but absent. And here are the three main lessons I have learned so far:

Of course I can’t guarantee that there won’t be any unpleasant confrontations in the future. On the whole I suspect that most people don’t particularly care, and those who do object are more likely to tut and roll their eyes than make a scene. I have, though, considered what I will say if challenged. Should I go with the “I’m exempt” line, perhaps citing a hidden disability and expressing outrage if disbelieved? Should I start spouting statistics, whipping out a copy of the Danish mask study from my jacket pocket? Should I maybe disarm any opposition by acting strangely, shouting “I drink your milkshake” with a mad gleam in my eye? It’s tempting.

But I think the best response is suggested by an American “Don’t Do Drugs” video we watched at school when I was about 13. (As it happens I’m now 40 and have never been offered any illegal drugs in my entire life; I sometimes wonder what I’m doing wrong. But that’s an aside). In the film, a girl who for some reason is adamantly opposed to chewing gum is repeatedly offered gum by her friends. “It’s delicious! Why not just try some?” But our heroine always responds: “I don’t chew gum.” No matter what blandishments or stratagems her gum-addicted friends employ, like a stuck record she repeats that one phrase: “I don’t chew gum.” It was a good message about how to say “no” in an assertive fashion and it stuck with me.

Because it’s true. I don’t wear a mask. I’m done with that. And if you don’t want to wear one, you don’t have to either.