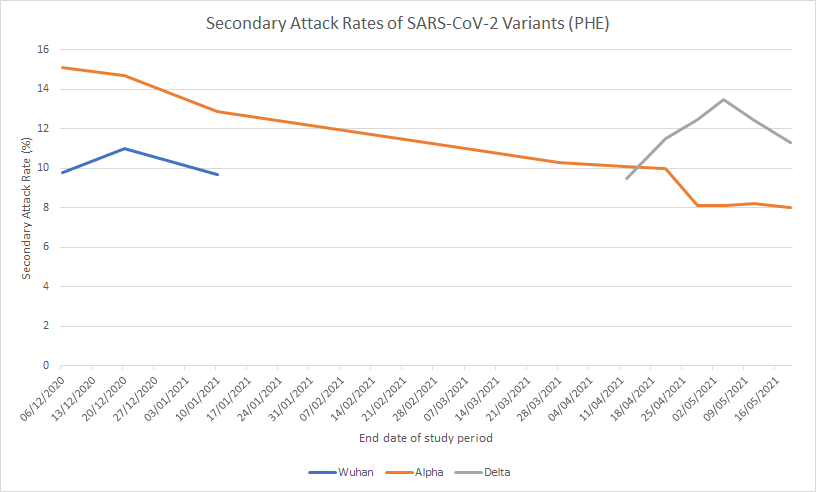 Yesterday I wrote about the latest Public Health England (PHE) report claiming that the Delta (Indian) variant is much more infectious than the Alpha (British) variant. I noted that the main measure of transmissibility – the secondary attack rate (i.e., the proportion of contacts that an infected person infects) – has varied over time.

It occurred to me that it would be useful to plot these attack rate values to show them graphically. So I went through the 15 technical briefings released by PHE so far and extracted the secondary attack data for the three variants (Wuhan, Alpha, Delta) and plotted them in the graph above.

There are a few points worth making from this about the infectiousness of the Covid variants.

First, between 85% and 92% of the contacts of all those infected with any of the COVID-19 variants do not get infected. This is an indication of the high level of immunity (i.e., low level of susceptibility) in the population and the low absolute infectiousness of the virus.

Second, new variants appear to start off with – or quickly acquire – a high attack rate compared to established variants, a rate which then declines. The decline for the Alpha variant occurred prior to any significant vaccine coverage meaning it cannot all be attributed to the vaccines. Conversely, despite the high vaccine coverage in April and May the Delta attack rate spiked. Nonetheless, it has already sharply declined. (The reason for the sudden drop in the Alpha attack rate from 10% to 8% at the end of April is unclear.)

Third, the Alpha variant was once more transmissible than the Delta variant at its recent peak, but is now much less transmissible.

While more data from more variants would help to confirm the patterns here, the data so far suggest that new variants will often be more infectious than established variants to begin with, but this will not last. Further, the degree of infectiousness appears to arise more from factors such as the epidemic phase or the season than inherent properties of the variant, save insofar as the new variant is slightly better at evading our immune defences for a time. And I mean slightly. Only 3% more contacts of those infected with the Delta variant are being infected compared to the Alpha variant, a difference that is dropping week on week.

The upshot is we should stop being frightened by claims that the latest new variant is “50% more infectious”, which are a distraction, and focus on levels of serious disease and how best to cope with them.