U.S. Regulators Expected to Approve Pfizer Vaccine for Use in 12 to 15 Year-Olds in Coming Days 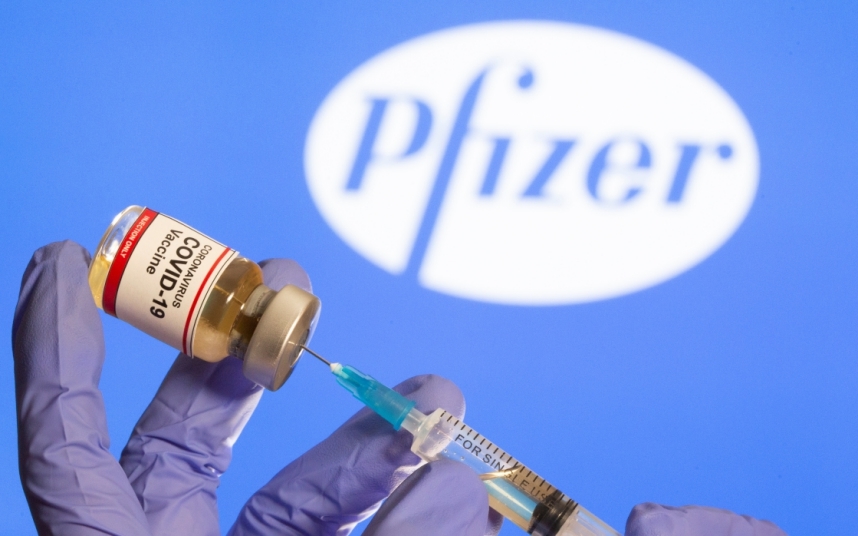 A woman holds a small bottle labeled with a "Coronavirus COVID-19 Vaccine" sticker and a medical syringe in front of displayed Pfizer logo in this illustration taken, October 30, 2020. REUTERS/Dado Ruvic

Not impressed enough by the success of their vaccine rollouts, the U.K. and the U.S. – among other countries – are increasingly looking to vaccinate children against Covid. In the U.S., health regulators are expected to approve the Pfizer vaccine for use in those aged 12-15 in the coming days. The Financial Times has the story.

The U.S. is set to approve BioNTech and Pfizer’s coronavirus vaccine for use in 12 to 15 year-olds in the coming days, according to people involved in the regulatory process.

The pharmaceutical companies applied for authorisation to begin vaccinating adolescents last month after trials suggested the inoculations were 100% effective at preventing symptomatic disease among the age group.

Two people close to the process said they expected the Food and Drug Administration (FDA) to give its green light next week, a move that could help bring the U.S. closer to “herd immunity” and prove vital for reopening schools full-time in the autumn.

The BioNTech/Pfizer vaccine, which was approved for those aged 16 and over last year, has been administered 131 million times, according to data from the U.S. Centers for Disease Control and Prevention. This has helped the U.S. vaccinate more than 50% of its adult population with one dose, making it one of the largest Covid inoculation campaigns in the world.

The vaccination drive has helped reduce cases and deaths in the U.S. in recent weeks. According to the latest figures compiled by the FT, the country is reporting about 50,000 cases and 700 deaths per day – roughly the rates it experienced in October last year.

Scientists have said that to reach herd immunity… however, the U.S. would need to vaccinate more than three-quarters of its population. That would be difficult unless children were vaccinated as well.

In March, Pfizer reported the results of phase 3 clinical trials in people aged 12-15, which showed better results than for those aged 16-25. Out of 2,260 adolescents who took part in the trial, 18 were infected with Covid – all in the placebo group.

In the U.K., children as young as 12 could be vaccinated when the new school year begins in September. The fact that only very low numbers of children tested positive for Covid after schools reopened in March – many of them falsely – has not stopped the NHS from preparing to extend the vaccine rollout to schoolchildren.

The FT report on vaccine efforts in the U.S. is worth reading in full.

Life Will “Feel a Lot More Normal By the Summer”, Says Neil Ferguson