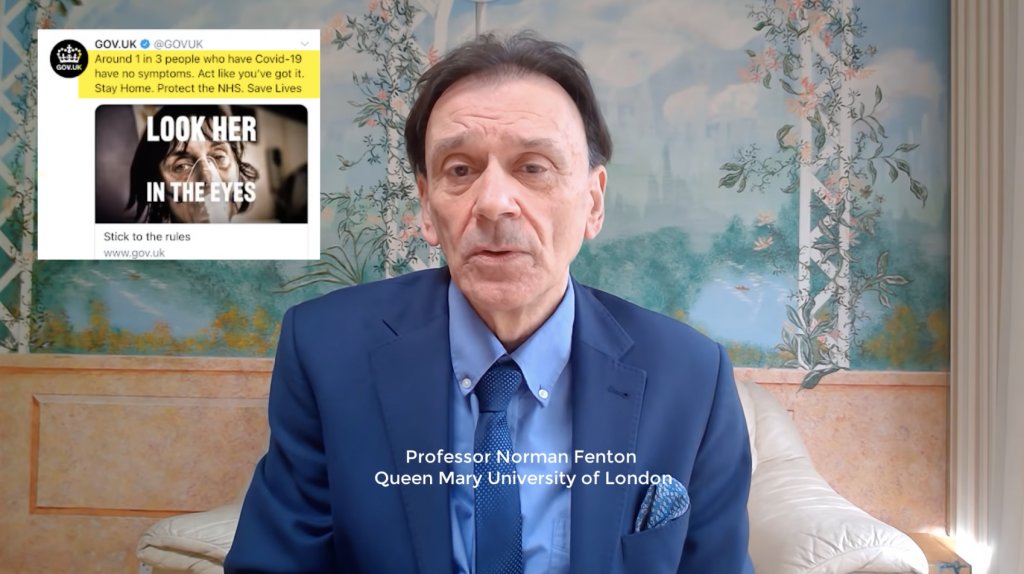 Lockdown Sceptics’ contributors Norman Fenton, Martin Neil and Scott Mclachlan, all at the School of Electronic Engineering and Computer Science at Queen Mary, have produced a thorough analysis of how many people with COVID-19 are asymptomatic. Their conclusion: not one in three, as the Government would have us believe, but one in 19. Here is the abstract:

Over the period Dec 2020 – Feb 2021, the UK Government, and its scientific advisers, made the persistent and widely publicised claim that “1 in 3 people with the SARS-Cov-2 virus have no symptoms”. In this paper we use a contemporaneous study of asymptomatics at Cambridge University to show that the claim is contradicted by the government’s own case numbers over that same period. A Bayesian analysis shows that, firstly, if the “1 in 3” claim is correct then, over this period, the actual infection rate must be at least 11 times higher than the infection rate reported by the Office for National Statistics (ONS), 0.71% ; and, secondly, if the reported infection rate of 0.71% is correct then the actual number of people with the virus, who have no symptoms, is at most 2.9% (1 in 34) and not 1 in 3. We argue that this contradiction can only be explained by the false positives being generated by RT-PCR testing. Hence, the published infection rate is estimating the number of people who test positive rather than the number of people with SARS-Cov-2 virus. When the false positive rate is correctly accounted for, the most likely explanation for the observed data, over the period in question, is an infection rate of approximately 0.375% rather than the ONS publicised claim of 0.71%. Likewise, we conclude that the actual number of people with the SARS-Cov-2 virus who have no symptoms is approximately 1 in 19 and not 1 in 3. We show that these results are robust under a sensitivity analysis that allows for a wide range of assumptions about testing accuracy and proportion of people with symptoms. Hence, the UK government and ONS claims cannot both be simultaneously true and the actual infection rates are significantly less than publicised.

The paper is worth reading in full.