Institute and Faculty of Actuaries 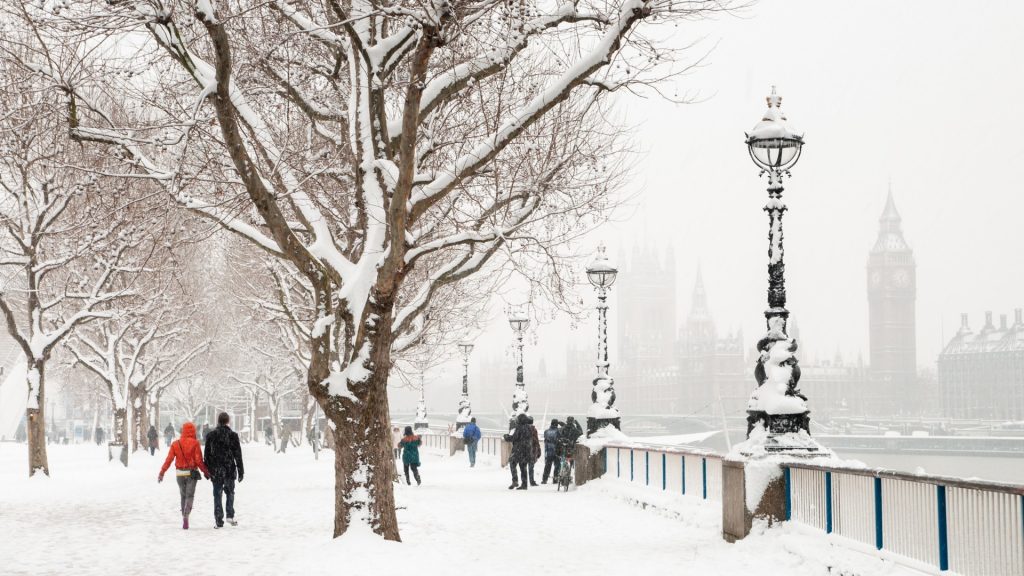 I’m slightly surprised to be writing this post as to my mind the answer is obvious – of course the U.K. will face a winter Covid surge. It’s winter. That’s what happens in winter; the dominant respiratory virus surges and, most years, taxes the capacity of the health service. The only question is how big it will be – unusually large like 2020-21, or unusually small like 2019-2020 before Covid hit? It’s worth remembering that more people died in England and Wales per head of population in 2008 (once adjusted for age etc.) and every year prior to it than died in 2020 or 2021, many of them succumbing during the winter flu season, as the chart below from the Institute and Faculty of Actuaries shows. In other words, there’s a winter surge in deaths-by-virus every year, and I see no reason why 2021-22 will be any different.

As I see it, the only realistic way there would not be a Covid surge on some scale is if another influenza-like virus takes over, which seems unlikely right now as flu is almost nowhere to be seen.

Nonetheless, I am writing this post, and that’s because some people seem to think that this year it’s not going to happen. Dr Sebastian Rushworth argues that places hit hard already, such as Sweden, New York and Lombardy, have developed enough immunity to avoid “another big wave” altogether. Andrew Lilico in the Telegraph maintains that owing to “infection saturation” and vaccine third doses, “for us, the Covid crisis is over”. Even the usual doom-mongers at SAGE are predicting a decline in hospitalisations and deaths in December, according to new modelling released on Friday. A decline in flu-like hospitalisations and deaths in December? Whoever heard of such a thing?

I freely admit that the winter surge may, because of acquired immunity, be relatively small in places like the U.K. which have already faced widespread exposure. Perhaps that’s all that Sebastian Rushworth and Andrew Lilico mean, and in which case our positions are not so far apart. But will it really be a non-event, as SAGE at least appears to be implying, so that Covid deaths decline during the winter and don’t put any further pressure on the health service?

Will the U.K. Face a Winter Covid Surge?Read More 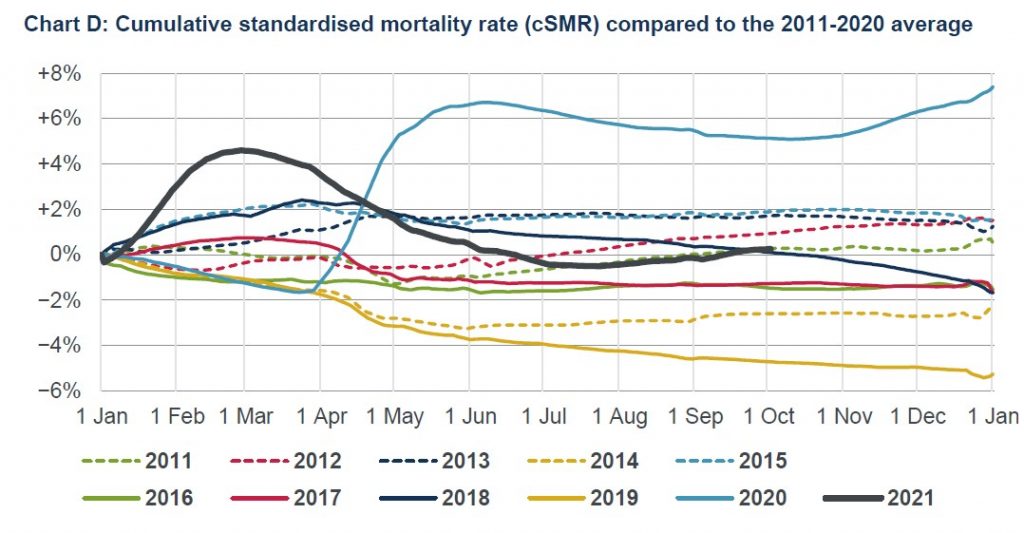 The latest quarterly report of the Mortality Monitor from the Institute and Faculty of Actuaries, with data to the end of September, brings some encouraging news and some worrying news. The encouraging news is that it shows overall mortality for 2021 so far is about average, meaning Covid has not yet managed to cause more people to die in 2021 than in a typical recent year. The worrying news is that, despite this, mortality in the under-65s is significantly elevated, and it’s not immediately obvious why.

The Mortality Monitor provides graphs and data for the cumulative age-adjusted mortality for England and Wales in 2021 compared to the 2011-20 average. This is a curve that starts at zero on January 1st each year, rises each week that there is above average mortality and falls each week there is below average mortality (see above). It rose at the start of the year during the winter Covid surge then fell as mortality dropped below average in March until, by mid-June, 2021 had below-average cumulative mortality. It started rising again at the end of July, and by the end of September had reached 0.3%, so about average. Note that the 2011-20 average includes the high mortality of 2020, but also the low mortality of 2019. Adjusting the mortality for age ensures that the ageing population is taken into account.

However, while overall mortality is about average, there are big differences by age. Mortality for over-65s is below average (which drives the overall trend, as the large majority of deaths occur in the over-65s), but mortality for under-65s is significantly elevated.

2021 is An Average Year for Deaths so Far. But What is Killing the Under-65s?Read More 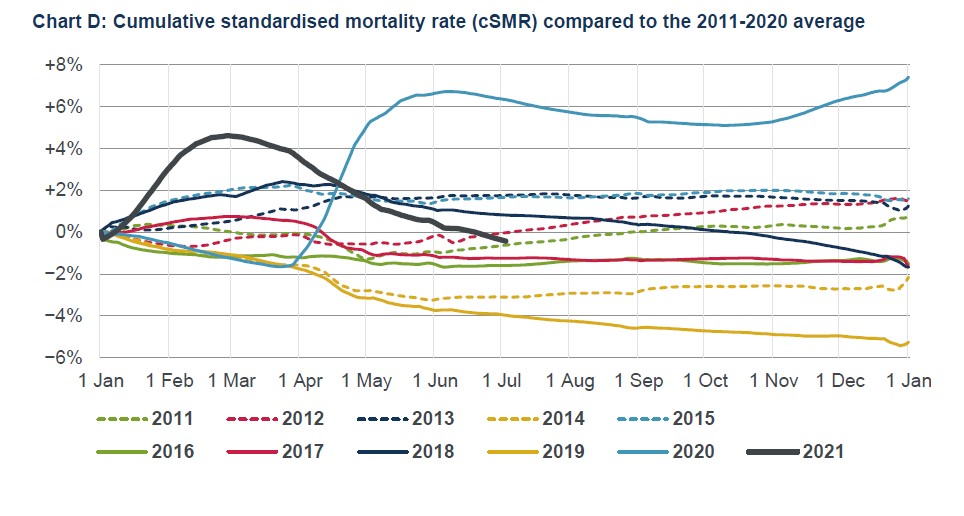 New figures from the Institute and Faculty of Actuaries (IFA) Mortality Monitor released today show that cumulative mortality in the first six months of 2021 in England and Wales is running 0.4% below the 10-year average, once adjusted for the size and age of the population (see above). This means, despite the surge in winter Covid deaths in January and February that spooked the country into accepting ongoing restrictions, 2021 is officially now a low mortality year. The low mortality since March has entirely cancelled out the initial spike.

The IFA used to report the cumulative age-adjusted mortality figures compared to the 10-year average each week, but controversially changed their baseline in their weekly reports in May from the 10-year average to 2019 (the lowest mortality year on record) just as 2021 was about to go below average. This means we have had to wait for the quarterly report today for the next update in order to be able to announce this milestone.

The new figures raise the obvious question: how can the Government justify continuing with any kind of restrictions or emergency measures for a moment longer when overall mortality is so low? Where is the ’emergency’ that justifies extraordinary measures?

Some will say it is only the restrictions that have prevented things being much worse. But where is the evidence of that? The U.K. has had more Covid deaths per head of population than countries such as Sweden which had fewer restrictions, while U.S. states which had few or no restrictions over the winter fared no worse (and often better) than those which had the strictest measures. Numerous studies have shown no relationship between restrictions and COVID-19 death tolls.

The latest figures, placing 2021 squarely among the least deadly years in history, should leave no one in any doubt that the emergency is well and truly over. 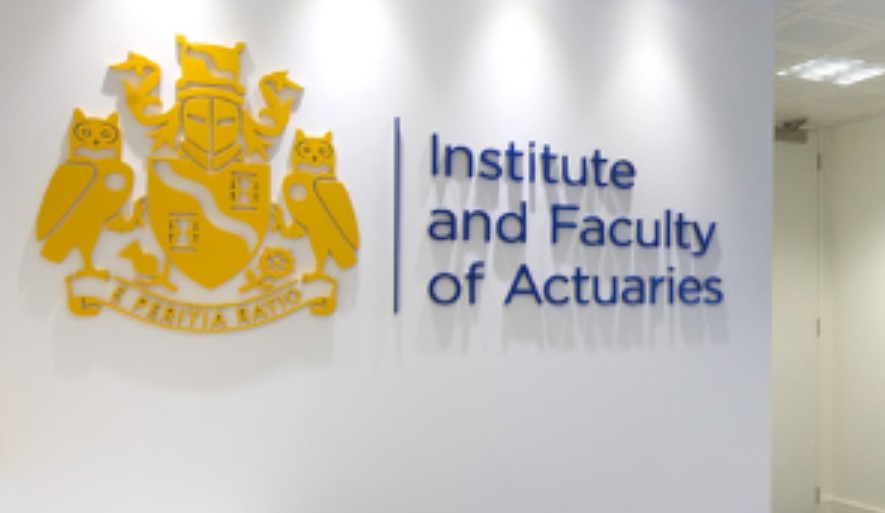 One of the most reliable and informative sources of mortality data over the past year has been the Institute and Faculty of Actuaries’ weekly mortality monitor report. It shows weekly and cumulative mortality for the year, and unlike the ONS, adjusts for population size and age so we get a truer reflection of how the current trends compare with the past.

Last week the report showed that the trend of deaths in 2021 has been so low since mid-March that all the excess deaths in January and February had been almost cancelled out and cumulative standardised mortality stood at just 1.1% above the 10-year average (see graph below).

At Lockdown Sceptics we were waiting for the moment when, at some point in the next few weeks, this figure would hit 0% so we could announce that, despite the winter Covid surge, 2021 was now officially a low mortality year with below average age-standardised mortality.

However, it appears that moment now may never come, as unexpectedly this week the Institute changed the baseline on its key chart. The 10-year baseline is gone, and in its place is a straight comparison to 2019.

The important thing to know about 2019 is it is the year with the lowest age-standardised mortality ever (see below).

Why has this Mortality Monitor Suddenly Changed its Baseline From the Ten-Year Average to 2019 – the Lowest Mortality Year Ever?Read More