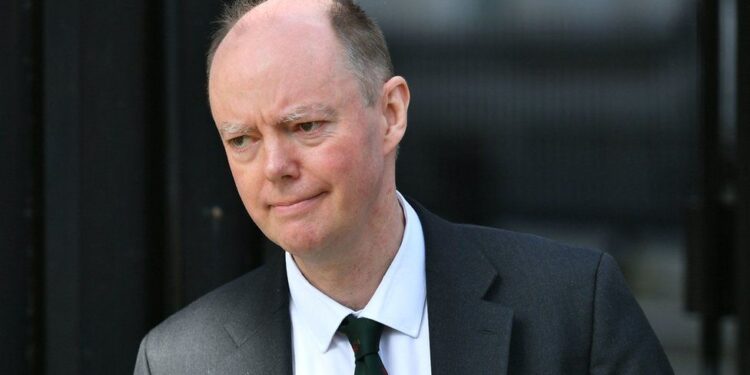 Sir Chris Whitty has warned that thousands of middle-aged people are now dying of heart conditions, although he blames this on people’s reluctance to burden the NHS during the pandemic rather than the mRNA vaccines. MailOnline has more.

This year has seen a higher number of deaths than normal from preventable conditions as many have been unable to get statins or pills for blood pressure in lockdowns.

As of now, there are currently 800 more people dying each week over normal levels, and only half of that is due to Covid, the Times has reported.

While the reasonings for these deaths are still unclear, the Chief Medical Officer has now alerted the Government about how barriers to accessing medication may have contributed to this.

Earlier this year, MailOnline reported that deaths from heart attacks soared by a fifth worldwide during the pandemic.

Previous research also indicated that many Brits were too worried to go to hospitals in case they were a burden on the already struggling NHS service, while others did not want to catch the virus.

Tens of millions of GP appointments and operations were postponed or scrapped as well, which could have contributed to worsening conditions.

In drawing attention to excess deaths, Whitty is said to have pointed to figures from the Office of National Statistics which demonstrate that 5,170 deaths in men aged 50-64 could have been helped by heart medications.

These patterns have also been recognised by Health and Social Care Secretary Steve Barclay who recently said that it was important to be “transparent coming out of Covid around excess deaths”.

He said: “Now, one shared point of understanding must be the scale of the COVID backlog, with around now 7.1 million patients.

“For example, we know from the data that there are more 50 to 64-year-olds with cardiovascular issues.

“It’s the result of delays in that age group seeing a GP because of the pandemic and in some cases, not getting statins for hypertension in time.”

The Department of Health has also opened more than 90 community diagnostic centres where people across the U.K. can be tested for numerous conditions including cancer, heart and lung disease.

Earlier this year it was pledged that a network of up to 160 centres and boosted testing capacity would be available by 2025.

Stop Press: Laurence Fox interviewed Andrew Bridgen on GB News last night about his call to pause the rollout of the Covid vaccines.