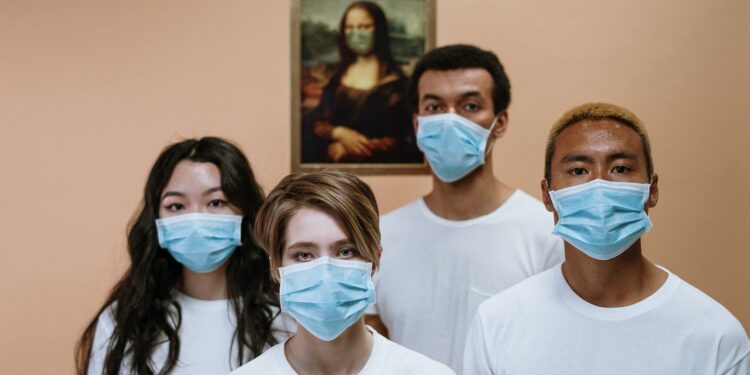 The New Yorker has published a disturbing article by Emma Green (’The Case For Wearing Masks Forever’) on the political activists in America demanding we lockdown forever in the name of racial justice. They sound like textbook left-wing loons, but we know from bitter experience that these post-Christian, quasi-religious cults have a nasty habit of infecting state bureaucracies, particularly in public health – and that already appears to be happening with respect to this cult. Here how the article begins:

Last December, the Centers for Disease Control and Prevention announced that it was shortening the recommended isolation period for those with covid-19 to five days. Getting exposed to the virus no longer meant that people needed to quarantine, either, as long as they were fully vaccinated and wore a mask. It was a big moment, and it occurred just as the Omicron variant was surging. Mindy Thompson Fullilove, a Professor of Urban Policy and Health at the New School, was livid.

Fullilove, who is Black, has spent her career studying epidemics: first aids, then crack, then multi-drug-resistant tuberculosis. She has seen how disease can ravage cities, especially in Black and working-class communities. From the beginning, Fullilove was skeptical of how the federal government handled the coronavirus pandemic. But these new recommendations from the C.D.C., she said, were “flying in the face of the science”. Not long after the announcement, she sent an e-mail to a Listserv called The Spirit of 1848, for progressive public-health practitioners. “Can we have a people’s CDC and give people good advice?” she asked. A flurry of responses came back.

What emerged was the People’s C.D.C.: a ragtag coalition of academics, doctors, activists, and artists who believe that the Government has left them to fend for themselves against COVID-19. As governments, schools, and businesses have scaled back their covid precautions, the members of the People’s C.D.C. have made it their mission to distribute information about the pandemic – what they see as real information, as opposed to what’s circulated by the actual C.D.C. They believe the C.D.C.’s data and guidelines have been distorted by powerful forces with vested interests in keeping people at work and keeping anxieties about the pandemic down. “The public has a right to a sound reading of the data that’s not influenced by politics and big business,” Fullilove said.

No one is in charge of the People’s C.D.C., and no one’s expertise is valued more than anyone else’s. The problems of “the pandemic and its response are rooted in hierarchical organisations”, Mary Jirmanus Saba, a filmmaker and one of the volunteers, told me. Roughly 40 people come to each weekly meeting, but many more are involved. (This spring, after a few of the group’s organisers published a manifesto of sorts in the Guardian, several thousand interested people reached out, Fullilove said.) The group sends out a weekly Weather Report – put together by a team composed, in part, of doctors and epidemiologists – summarising data about transmission rates, new variants, and death rates. They’ve published explainers on testing, masks, and ventilation, among other topics, typically with a call to action: call the White House, call your congressperson, demand free tests and treatment for all. On their Web site, they recently posted a guide for safer gatherings, which recommends that all events be held outdoors with universal, high-grade masking. The organisation has nearly 20,000 followers on Instagram, and it prides itself as a resource for various groups, including people who are immunocompromised and want to find a way to protect themselves and activists who are trying to lobby their local government for more covid restrictions.

Although the group has been scathing in its critiques of the C.D.C., it has received support from respected institutions in the public-health world. It has also received blue-chip funding from organisations such as the Kresge Foundation, which focusses on expanding opportunities in American cities, and the Robert Wood Johnson Foundation, one of the most influential health-focussed philanthropies in America, which gave the group a hundred and fifty thousand dollars. As it happens, Robert Wood Johnson’s C.E.O., Richard E. Besser, is a former Acting Director of the C.D.C.

Fullilove would neither confirm nor deny whether there are any current C.D.C. employees involved with the People’s C.D.C., but, in a recent Webinar, Edgar Rivera Colón, who often serves as the group’s meeting facilitator, claimed that there has at least been some moral support: “We have comrades that are within the C.D.C. who are saying to us, ‘Go ahead with your bad selves.’” The volunteers don’t necessarily agree among their bad selves about what, exactly, their larger goal is – whether their project is a protest, an act of mutual aid, or an exercise in shadow governance. What’s clear is that the People’s C.D.C. interprets evidence about this stage of the pandemic, and what we should do about it, differently than the C.D.C. and the White House. Their goal is to provide the public with an alternative source of information. The organisation is part of a much broader ecosystem of left-wing public-health groups that advocate more persistent mitigations: there are support communities for those experiencing long covid, including Survivor Corps, which has almost two hundred thousand members on Facebook; research groups like the U.K.’s Independent sage, which reviews the British government’s pandemic policies; and nonprofit activist groups such as Public Health Connected, which provides resources to health-care professionals. This constituency is loud on Twitter, and they are influential in the press.

Influential in the press. Just let that sink in.

Green goes on to give a name to this cult – although the one she comes up with could equally apply to climate activists:

The People’s C.D.C. talks about ‘science’ as proof that the members’ position is correct, when in reality they’re making a case for how they wish the world to be, and selecting scientific evidence to build their narrative. It’s a kind of moralistic scientism – a belief that science infallibly validates lefty moral sensibilities.

Stop Press: The New York Times published a piece on Boxing Day entitled ’The Last Holdouts’ about the poor, benighted souls who still believe we’re in the midst of a dangerous pandemic and insist on wearing industrial grade masks on the rare occasions they come out from under their beds.