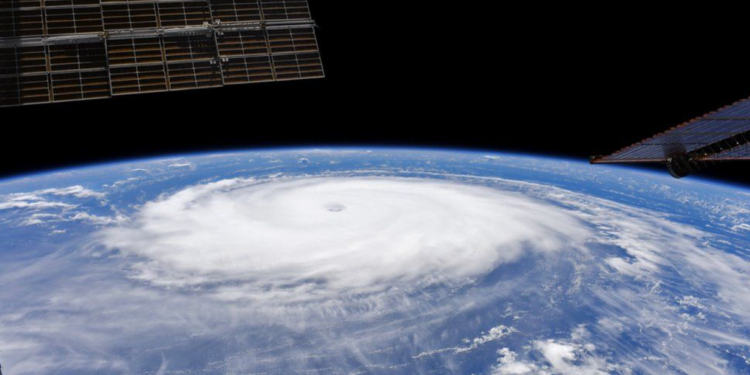 More details are emerging about an astonishing drop in cyclonic storm energy across the northern hemisphere during 2022. The latest calculations from Colorado State University show a 33% below-trend fall in its Accumulated Cyclone Energy (ACE) index, which reflects frequency, intensity and duration of all hurricane and tropical cyclone data. Curiously, this crucial fact seems to have gone missing in much of the mainstream media’s half-hearted commentary on a ‘below average’ North Atlantic hurricane season. Describing what it calls a “unique” and “near average” season, BBC Weather Simon King failed to even mention the enormous drop in cyclonic energy. In September, the BBC “Reality Check” was running the party line that evidence showed hurricanes were “getting more powerful”.

The slowdown in the scale of 2022 cyclonic energy compared with the 30-year trend (black line) is clearly shown in the graph above compiled by Colorado State. The northern hemisphere data include the North Atlantic, Northeast Pacific, Northwest Pacific and North Indian Ocean. The university researchers calculate that the ACE reduction for the North Atlantic alone was 22%. This of course is just one year, and will be dismissed by climate alarmists as a blip. Let us therefore look at the 50-year ACE record.

Over 50 years it appeared that the energy generated by hurricanes and cyclones moves up and down within a clearly defined range, debunking all the hysterical alarmist claims that human-caused climate change is making storms much worse.

Many of these claims rest on a simplistic formula that a warmer planet leads to warmer oceans, and hence more severe storms. Another simplistic, and unproven, hypothesis states that humans are causing all the planetary warming. Many activists stress this simplicity, including the often controversial Michael Mann, who recently told an interviewer that the science was basic and straightforward. It was not “rocket science”, he added, and “it tells us that we’re reaping what we’ve sown”. But it isn’t basic. Atmospheric heat exchanges are complex and not fully understood. Their precise effect is currently beyond understanding, and climate models that predict longer term weather and climate events such as future storms are frankly useless – as this season’s hurricane forecasts demonstrate.

As we reported recently in the Daily Sceptic, the Barcelona Supercomputing Centre noted that of the 19 organisations that issued forecasts for the North Atlantic hurricane season last spring, 17 of them predicted an above-average frequency of named storms. By early summer, all 19 of these forecasts predicted an above-average season. All these predictions were wrong. Never one to be out of a groupthink crowd, the U.K. Met Office said it was “most likely” the season would be above average. It noted that since all the prediction were pointing in the same direction, this gave a “higher degree of confidence” to its own thoughts on the matter.

At the time the BBC threw its own alarmist hat in the ring by helpfully adding: “With another active season expected, many might question whether climate change has had a hand in this.”

Fast forward to the end of November, and the BBC’s Simon King notes that predicting some months in advance is always a “tricky science”, but “seasonal forecasting of the Atlantic hurricane season has shown much higher skill in recent decades”. Looking ahead, King observes long-term climatic patterns, and these suggest that “next season is likely to be an active one in the Atlantic”.

You don’t say – active, eh? Well, we never saw that one coming.

More hurricanes and cyclones packing ever larger amounts of kinetic energy is a totemic climate alarmist scare. The most severe storm of the year, hurricane Ian, which did considerable damage in Florida, was pounced on by activists, politicians and media alike to promote climate Armageddon, and by extension the socially and economically restrictive Net Zero political agenda.

But this green campaigning relies on pseudoscience, promoting individual bad, or extreme, weather events to make increasingly bizarre forecasts of human-caused long-term changes in the climate. As I have noted before, this year has been a disaster for this type of green boosterism. One by one the much cherished poster scares, from coral on the Great Barrier Reef (growing back nicely) to summer sea ice in the Arctic (ditto), have disappeared from the mainstream headlines.

Blown away, it seems, in an ‘above average’ season of climate reality.