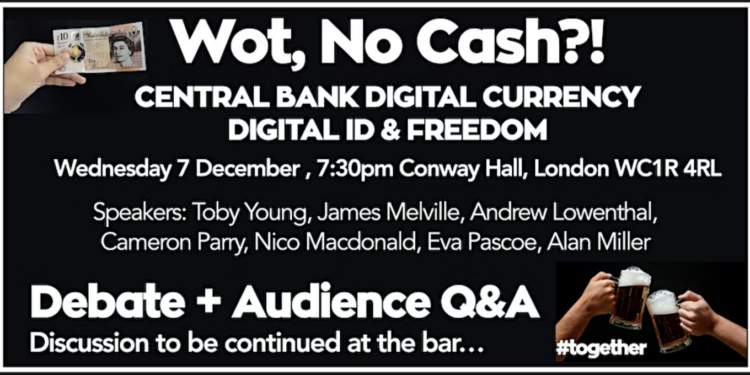 Daily Sceptic readers are warmly invited to the upcoming ‘Together Talks’ event “What, No Cash?! Digital ID, Central Bank Digital Currency and Freedom” on Wednesday December 7th at 7:30pm at Conway Hall, 25 Red Lion Square, London WC1R 4RL. Toby will be speaking and you’ll find him in the bar afterwards if you want to come and say hello.

We launched #together when the threat of Vaccine Passports became a reality after Boris Johnson announced on ‘Freedom Day’ that they would be necessary to gain access to certain venues.

While we resolutely saw them off and prevented the U.K. becoming a ‘show me your papers’ society, Digital ID is increasingly being used across the U.K.

The Government insists Digital ID will be voluntary but there are significant concerns around privacy, surveillance and autonomy.

Increasingly, retailers are no longer accepting cash and ATM machines are in steep decline. President Biden recently announced that a ‘digital dollar’ is forthcoming and Rishi Sunak excitedly promotes a future of Central Bank Digital Currency here in the U.K.

Recently, PayPal shut down several accounts including the Free Speech Union and froze access to funds. Other platforms and financial institutions have done similar, including JP Morgan Chase and YouTube, raising significant concerns about freedom of speech and the ability to financially transact. Local Authorities have also favoured fines for a whole array of areas in recent years. Would Digital ID encourage even more of this?

With high inflation and a cost of living/lockdown crisis, is Digital ID a ‘convenience’ tool or does it risk opening the floodgates to programmable money where every single transaction you make is recorded on the ledger, as the head of the Bank of International Settlements has stated?

Germany has moved to evaluate any bank transaction over 100 euros in the name of ‘challenging terrorism’. Meanwhile, Oxford Council is planning a ‘15 minute city’ where breaching boundaries would result in a fine. These ever-growing encroachments on our personal freedoms are concerning to most who are paying attention.

Can we insist on retaining cash? How much can we influence such issues? Just recently the Online Safety Bill appears to have been amended to remove the ‘legal but harmful’ clause due to significant pushback, which is an encouraging sign.

Can we design a future that implements the best aspects of technology without facilitating the technocratic impulse to control us?

Sign up here (and hopefully EventBrite won’t decide to pull the plug).