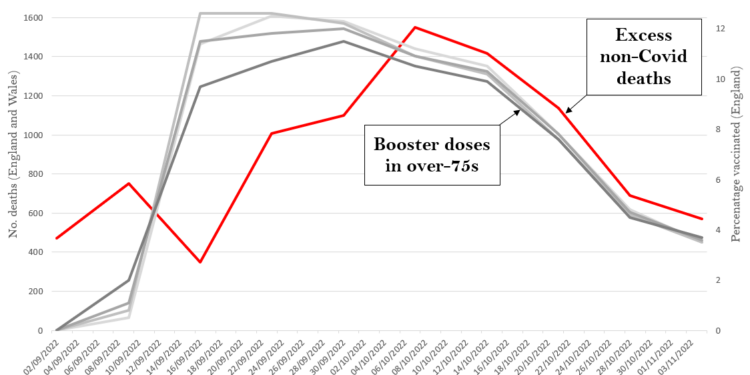 The excess deaths crisis continues, with 795 excess deaths – 7.4% above the five-year average – registered in England and Wales in the week ending November 11th, according to the ONS. Of these, 434 were attributed to an underlying cause other than COVID-19, bringing the total excess non-Covid deaths since the wave began in April to 24,820.

Here are the figures on cancer deaths.

The rest of the excess deaths are largely heart and circulatory system related.

The current preferred explanation for the thousands of above average deaths in the U.K. is the NHS crisis and backlog. Certainly this can’t be helping, though by itself it doesn’t explain why a similar phenomenon is happening internationally. Others argue that post-Covid effects are resulting in many premature deaths, particularly heart related. However, such a phenomenon remains contested and the recent British Heart Foundation report dismissed it, saying “Covid infection is no longer a driving force behind the excess [cardiovascular disease] death rate”.

A number of experts have suggested the experimental mRNA Covid vaccines may be playing an important role. The jabs are known to be associated with heart problems and blood-clotting problems, and autopsies have shown that people have died as a result of inflammation due to spike protein in their heart. The current question is how often this and other serious adverse effects happen, and whether it is often enough to make an appreciable impact on excess mortality.

The recent autumn booster rollout in England has been conspicuously associated with a spike in excess non-Covid deaths, as seen in the chart below. In this chart, the autumn vaccine doses in the over-75s (the age group which makes up the large majority of deaths) have been plotted against excess non-Covid deaths by date of occurrence from the ONS (in red). The tight correlation is striking. The Covid death occurrences (in blue), on the other hand, rise and peak several weeks later, suggesting the non-Covid deaths are not ‘silent Covid’ deaths, as some suggest.

Here’s what the figures look like since February, with the autumn spike on the right hand side.

Correlation doesn’t equal causation, of course. But since the correlations keep cropping up, and causal mechanisms for fatal events are known, the possibility the vaccines are involved in some portion of the tens of thousands of recent excess deaths needs to be taken seriously and properly investigated by the UKHSA and MHRA.