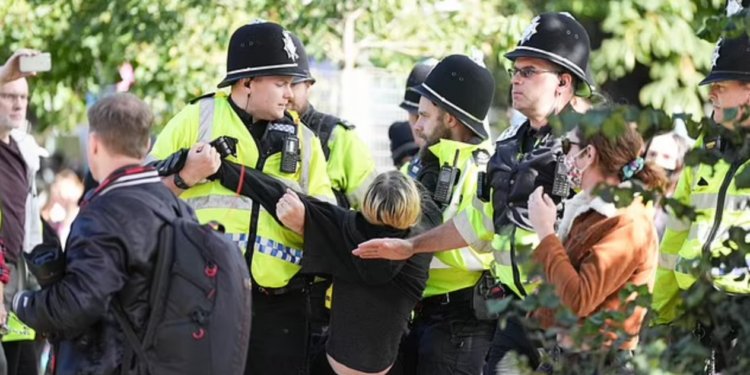 Sussex Police have threatened a women right’s group founder with a hate crime arrest after a rally two months ago where her group was attacked by pro-trans activists. The Mail has the story.

The force told mother-of-four Kellie-Jay Keen an allegation made about her that she used “words or behaviour to stir up hatred on the grounds of sexual orientation” was now being investigated.

In an extraordinary phone call released by Standing For Women founder Kellie-Jay, one officer said she could be arrested if she did not attend a “voluntary” interview.

The turn of events seems particularly unusual given the same police force had previously investigated menacing messages sent against her before the Brighton rally.

They included many branding Ms Keen – who is also known as Posie Parker – a TERF and urging people to “Fight her by any means you see fit”.

It prompted J.K. Rowling to tweet: “I see the Be Kind brigade are once more hiding behind their black masks, throwing smoke bombs, screaming ‘scum’ at women speaking up for their sex-based rights and howling abuse at lesbians for not doing d***.”

Last night Ms. Keen revealed Sussex Police had threatened her with arrest at her home by the Wiltshire force, calling it today a “most pernicious war on women”.

She said she would not be attending the ‘voluntary’ interview.

In the phone call conversation released online the Sussex officer told her: “Somebody has made an allegation against you about a hate crime. We do need to speak to you about that matter as part of our investigation. We do need to do is get you to come down to Brighton ideally so we can have a voluntary interview.”

Ms Keen then presses them on what exactly the allegation was that had been made about her. The police caller replies: “The crime is use of words or behaviour to stir up hatred on the grounds of sexual orientation. It’s gonna be a voluntary interview so you can give your side of the story as well. We’re not putting anything against you, you can bring a solicitor with you if you like. It’s just so we can bottom out your side of what’s gone on. We can discuss what allegations have been made against you as well. We then can look into it a bit further to see if a crime has actually occurred.”

But when the officer is asked exactly how voluntary the interview is, the reply discloses it is perhaps less free than suggested.

They tell Ms Keen: “Essentially we are asking you to come down to Brighton, it’s going to be an interview where essentially it’s a little bit more relaxed, at any point you can end the interview if you like, you can bring a solicitor with you. If you don’t attend then we will potentially be looking at getting Wiltshire Police to come and arrest you so they can come and interview you themselves.”