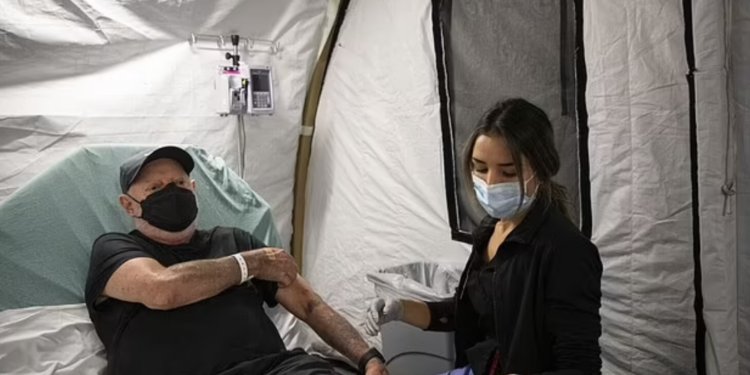 Flu is back with an unusually large and early surge, leading several Southern California hospitals to begin using overflow tents to cope with a rising number of patients with flu and other respiratory illness. AP News has more.

The move comes amid a rise in flu symptoms in emergency room patients in San Diego County. About 9% of these patients had flu symptoms last week, up from 7% two weeks ago, according to a county report that also flagged an increase in patients with COVID-19 symptoms, though not as quickly.

Scripps hospitals and doctor’s offices reported 1,695 positive flu tests since September 1st, up from 471 in the same, year-ago period.

Health experts said it was not immediately clear whether flu cases would reach an earlier-than-usual peak in California, which typically sees the bulk of cases in December through February, or a prolonged flu season.

Andrew Pekosz, Professor of Molecular Microbiology and Immunology at Johns Hopkins University, tweeted a chart showing an alarmingly steep and early rise in positive flu tests at the Johns Hopkins Hospital in Maryland.

What lies behind the surge? Have lockdowns reduced our immunity by limiting our exposure? Have they driven mutations in viruses to make them more infectious and virulent? What role might the Covid vaccines be playing?

Will it lead to calls for ’emergency’ Covid measures for flu?

Will it mean Covid finally takes a back seat this winter and lets another virus have the field?

How this pans out medically and politically is worth watching closely.

Doing Stuff Without Evidence is the Opposite of the ‘Precautionary Principle’