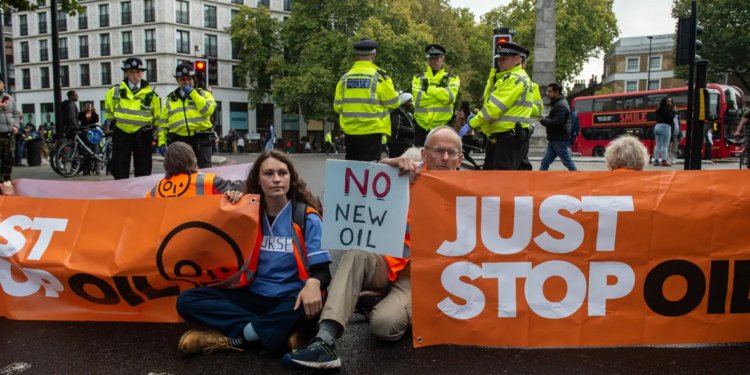 Supreme Court judges have been blamed for giving the green light to eco-zealots to cause mayhem on Britain’s roads as Just Stop Oil are understood to be exploiting an extraordinary 2021 legal ruling that protests can be a “lawful excuse” to block roads. The Mail has the story.

The ruling followed the prosecution of four anti-arms trade protesters who blocked a road leading to the ExCel Centre while it hosted an arms fair in September 2017.

It ruled that protesters can have a “lawful excuse” defence under the European Convention of Human Rights against the offence of obstructing a highway, even where they have used “deliberately physically obstructive conduct”.

The so-called “Ziegler” ruling, named after Nora Ziegler, one of the protesters, was hailed at the time by campaign group Extinction Rebellion.

It is understood that protesters are briefed about the ruling before they block motorways and trunk roads in a bid to cause traffic chaos.

Former Tory leader Iain Duncan Smith told the Mail: “Clearly it’s an absurd judgment. They have a right to protest but they don’t have a right to cause such chaos that people are hurt and can’t get to hospitals. Whose rights are more important? The right of a protester or the right of somebody to go about their business? It’s time that this was resolved and resolved damn quickly by the courts. The Supreme Court now has got to start behaving in a way that represents the balance of rights.”

Surely the Government just needs to pass a law that states, for the avoidance of doubt, that protests may never be a lawful excuse to obstruct a highway. Since Parliament is sovereign, such a law would have to take precedence over any prior legal rulings interpreting general principles in a statement of human rights. It’s no good the Government blaming the courts when it has the power to pass laws that bind the courts.

Instead of such a simple remedial measure we have the new Public Order Bill, which, as Claire Fox explains in the Spectator, is introducing Serious Disruption Protection Orders (i.e., ‘protest-banning orders’) that cover an extraordinary range of offences.

These can be doled out to anyone who has been on more than one protest over the last five years. This includes any type of protest, not just XR-related activities. If issued with an SDPO, you can be banned from going to a particular place, associating with particular people, encouraging someone else to go on a demo or using the internet in a particular way. You can be punished by the state for retweeting an advert for a protest. You can also be issued with an electronic tag for up to 12 months, using GPS data technology that allows the police to monitor your whereabouts 24 hours a day. This extreme level of surveillance risks being used against innocent individuals who have not committed a crime.

All completely over the top, and made all the worse for coming from a Government and legislature that has spent the last three years imposing extreme restrictions on the population and responding so aggressively to protests against them.

Fox adds that the new Bill also, in Clause 9, criminalises “seeking to influence, advising or persuading, attempting to advise or persuade, or otherwise expressing an opinion” in the vicinity of medical facilities. The initial target is anti-abortion protestors, who for some reason are deemed to have fewer protest rights than others. But clearly it could be applied to any medical matter, such as gender reassignment treatment and vaccines. Yet more clamping down on peaceful protest, more constricting of the freedoms we once took for granted.

It’s not complicated. We want normal protests to be allowed, and violence, criminal damage and road-blocking to be banned. How do the politicians and courts manage to make something so simple appear so complicated?

Why is the USA Still Insisting Visitors Are Vaccinated When Every Other Country Has Ended Its Travel Restrictions?