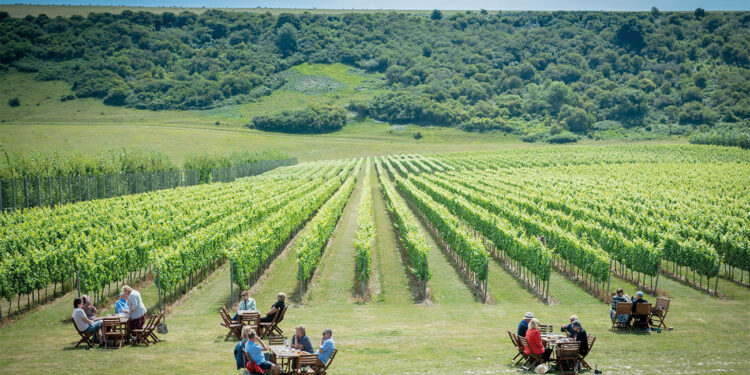 I disagree with the argument of Anonymous (Daily Sceptic, November 7th) that the renaissance of English wine, particularly sparkling wine, has nothing to do with climatic warming.

Viticulture in England has ebbed and flowed with changes in the climate. Vine-growing flourished during the early medieval warm period (from the 11th to the 14th or 15th centuries). Indeed, one of the arguments for the existence of an early medieval warm period is the wide spread of vineyards, and I do accept that one has to be wary of using one hypothesis as evidence of another, but there is plenty of other historical evidence for climatic warming at this time – for example, complaints from sheep-owners about the spread of agriculture on to upland grazing land where crops had not previously been grown. So I think we can reasonably accept the existence of an early medieval warm period. Indeed, the interest groups who argue that the climate has changed as a result of manufactured carbon dioxide have gone to considerable efforts to hide the existence of this medieval warm period, as this undermines their insistence that industrial gases have been the principal cause of climatic warming.

Why was vine-growing so widespread in England in the early Middle Ages? One obvious explanation is that wine was needed for the celebration of Mass. In other words, the climate was irrelevant. Certainly there were a lot of monastic and other ecclesiastical vineyards at this period. But there were also many vineyards on land owned by the nobility, who were presumably interested only in drinking wine for pleasure. Furthermore, from 1152 onwards Bordeaux with its vineyards was ruled by the same family that held the English crown, and there was a great deal of trade between the two regions, including wine, so the fact that vine-growing continued on noble estates after this date suggests that the climate favoured this practice.

There is a well-known quotation from the chronicler William of Malmesbury from the early 12th Century asserting that the vineyards of the Vale of Gloucester produced wine of comparable quality to that produced in France.

Vine-growing then declined from the 14th and 15th centuries onwards. There were a number of reasons for this, including the collapse of the rural workforce as a result of the Black Death, and the Dissolution of the Monasteries under Henry VIII. So it is impossible to say for certain that cooling of the climate explains the disappearance of English wine after the Middle Ages.

I believe it is generally accepted that the climate of Northern Europe did cool from the 16th Century onwards and that there was a Little Ice Age in the 17th and 18th centuries. There was also very little vine-growing in England. Anonymous cites the example of Charles Hamilton at Painshill in Surrey in order to support his argument that the current success of English sparkling wine has nothing to do with the climate, but I would suggest that the history of Hamilton’s venture could just as well be used to argue the opposite. Firstly, we do not know that Hamilton’s sparkling wine was any good. Sure, people who visited his estate did tell him that they appreciated his wine, but what else would one have expected them to have said to him? The visiting French connoisseur Pierre Grosley was rather more critical: “To the eye, it was a liquor of darkish grey colour; to the palate, it was like verjuice and vinegar blended together by a bad taste of the soil.” (Verjuice was a term for the juice of unripe grapes, which was used for cooking and for making mustard.)

Furthermore, the singularity of Hamilton’s venture does suggest that the climate was not suitable for vine-growing at this period. The 18th Century was a period when the aristocracy and the landed gentry took great pride in the produce of their country estates, and surely this would have included wine had it been practicable to produce it? For much of the 18th Century England was at war with France, and French wine was extremely difficult to obtain, so there would have been a commercial as well as political motive for vine-growing. Yet Hamilton’s vineyard is one of only two significant wine estates in England from this period.

There was only one significant vineyard in the 19th Century, and that was not in England but in South Wales, at Castell Coch. Punch famously and perhaps a little harshly remarked on the produce of the latter that it required four men to drink it – one to volunteer to drink the wine, two to hold him down, and another to pour the wine down his throat.

I do accept the argument of Anonymous that the reintroduction of vineyards into England after the Second World War had as much to do with the identification of suitable German grape varieties as with any warming of the climate. That said, a lot of the wine that was made in England from these grape varieties in the mid-20th century was not of the best quality. The standard of English still white wine has increased dramatically in recent decades, and we could spend forever arguing how far that relates to climatic warming and how far to improved vine-growing and wine-making techniques. There are even a few decent red wines now being made, which I cannot imagine would have been envisaged by the pioneers of the 1950s and 1960s.

Anonymous is also right to observe that you need much less ripe grapes for the production of sparkling than for still wine, on account of the former’s double fermentation process. The flip side of this is that it is difficult for the manufacturers of sparkling wine to make a top-class product from fully ripened grapes, which is a problem that increasingly confronts the producers of sparkling wine in Champagne itself. As the climate of Champagne has grown warmer – with significantly earlier harvests – champagne houses have been hedging their bets by buying land in England on which to plant vines. The climate of southern England is a little cooler than that of Champagne, and the soil in many places is comparable. So it makes sense for champagne producers to seek to compensate for climatic warming by expanding their production into southern England. I would argue that we should rejoice in the warming of our climate, as it is likely increasingly to favour the production of English sparkling wine over that of Champagne.

Covid Commemoration? You Must Be Joking