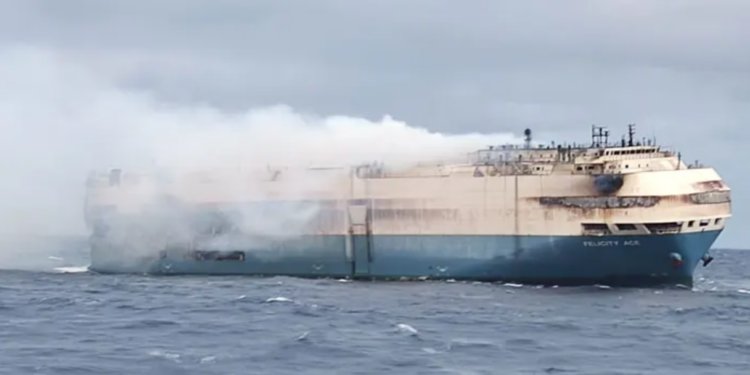 Startling new evidence has emerged showing a dramatic increase in fires caused by exploding electric vehicle batteries in the U.K. There was a sharp rise last year, particularly in London where fires jumped from 32 in 2020 to 102 in 2021 and already 98 recorded in the first half of this year. The information comes from a recent Freedom of Information request made by the health and safety consultancy CE Safety, who contacted all 50 fire and rescue services. Statistics were unavailable from 11 services, including Scotland, leading CE Safety to suggest these results “only tell half the story around this trend”.

Electric vehicle (EV) sales have risen of late and the fire trend, notably in London, is undoubtedly growing. In Merseyside, there were 16 fires in 2021, and so far there have been 13 for the first half of this year. The number of scooters catching fire is much higher than other vehicles across Britain, but in London electric cars are the prime fire culprit, followed by bikes, vans, buses and motorbikes.

EV battery explosions are a much more serious fire incident than conflagrations in internal combustion vehicles. Explosions can occur very quickly, triggering the release of highly toxic gases. They are very difficult to extinguish, and present considerable safety issues for fire workers who tackle the blaze. Since they are chemical fires, it is not possible to extinguish them by cutting off the oxygen supply. The fire often takes hours to control, and can reignite hours or days after it was thought to be out.

The risks involved with large lithium-ion batteries have been known for some time, although the desire to promote ‘green’ transport means discussion is often muted. Paul Christensen, Professor of Pure and Applied Electrochemistry at Newcastle University, notes that a lithium-ion battery stores a huge amount of energy in a very small space. “Since 2008, the adoption of such batteries has outstripped our appreciation of their risks,” he notes. Batteries can catch fire if perforated, but, “more worryingly”, contamination of just one cell during manufacture can lead to a spontaneous fire. “Even the most experienced and careful manufacturers have defective electric cells passing through their very careful quality control systems,” he adds.

Many of the fires occur during recharging, something that often occurs in or near domestic premises, although spontaneous combustion can also occur if the battery pack is knocked or damaged at any point. In June this year, the failure of an e-scooter battery caused a fire in a 12th floor flat in Shepherd’s Bush. At the time, the London Fire Brigade said it had seen a “huge spike” in e-bike and scooter incidents. It has issued a number of warnings, pointing out how ferocious the fires can be. A similar incident involving an e-scooter battery explosion occurred in April causing substantial damage to a flat in Portsmouth.

In May, six buses were engulfed in flames at a terminal at Potters Bar following a battery recharging explosion. A local resident described the scene in the following terms: “I just heard an unbelievable noise that sounded like a jet and when I looked out my window one of the buses exploded in a ball of flames”. CE Safety notes that in London, 19 bus fires have had to be extinguished.

Last February, the roll-on-roll-off car transporter Felicity Ace was engulfed in flames after an EV fire. The ship burnt for 13 days before finally sinking off the Azores with the loss of 4,000 high-value vehicles on board. The rapid spread of the fire, which proved impossible to control, sent shock waves through nautical circles. The German insurer Allianz warned that the rising demand for EVs was an emerging risk for shipping fires on cargo ships as they are not designed to carry lithium batteries safely.

Neither, it might be noted, are passenger car ferries.

Has the risk involved in the huge increase in the numbers of massive lithium-ion power packs been downplayed? Certainly, fire hazard publicity is unlikely to help EV sales, as Governments around the world try to ban internal combustion engines within extremely short periods of time. But another question that few seem to be asking is whether battery cars are actually a practical replacement to existing transport?

EVs are expensive and likely to become more so as the world scrambles to buy limited supplies of minerals. A recent alternative energy report for the Finnish Government by Professor Simon Michaux found that “in theory” there was enough global reserves of nickel and lithium if it was used exclusively for EVs. More cobalt, however, would need to be discovered. But it gets much worse, since batteries have a working life of only eight to 10 years and will need to be regularly replaced. As with many Net Zero projects, the EV experiment belongs in Alice in Wonderland territory. Michaux is slightly more measured in his commentary: “This is unlikely to be practical, which suggests the whole EV battery solution may need to be rethought and a new solution is developed that is not so mineral intensive.”

EV sales have been soaring in the U.K. of late. But the ‘green’ credentials of EVs are a far cry from their popular portrayal, and safety concerns in the future about their batteries are only likely to increase.