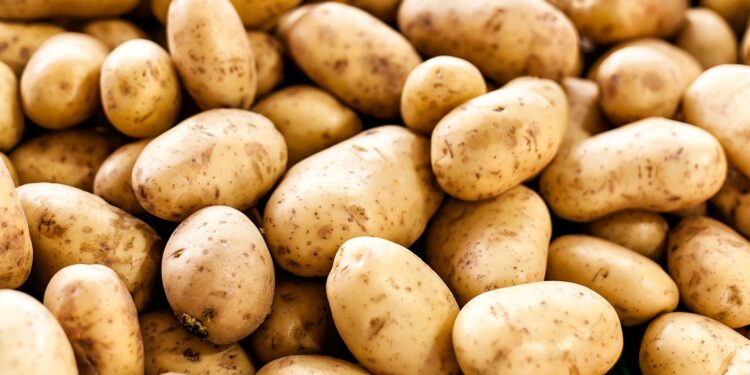 The humble potato may struggle to grow in the U.K. in years to come due to climate change, reported BBC Scotland recently. Researchers are said to have identified “huge problems” coming in future with hotter weather and droughts “which pose an existential threat to the industry”. Needless to say all these future predictions arise from climate models including “crop simulation” research from the Invergowrie-based James Hutton Institute (JHI).

According to these models, there may be as many as 60 “heat stress” days of at least 25°C in the growing season in parts of England and Scotland, states Professor Lesley Torrance, the JHI director of science. The researchers claim that this will reduce yields. Is that great British delicacy, a simple plate of fried chips (plus pot of curry sauce for true gastronomic diversity), under existential risk? As always when the BBC tells you anything these days, it is a good idea to consult the actual data, and take the climate model forecasts and attribution guesses with a large dose of salt (and vinegar). First up, we can see that all that promised extra heat had better get a move on. In Scotland, the average temperature has been flatlining for nearly two decades.

Global warming came to a shuddering halt in Scotland many years ago – the same average temperature graph for the UK is little different. As we have noted in the past, the 2010s in the U.K., with an average temperature of 9.17°C, were cooler than the 2000s at 9.31°C. Rainfall in the U.K. is slightly higher of late, but the trend shows little change going back to Victorian times. And again, as regular readers will recall, the accuracy of the ‘homogenised’ surface temperature measurements is being increasingly called into question since much of the recent increases appear to owe a great deal to urban heat effects. Recent research reveals that the urban distortions could have added 50% extra warming over 50 years to 37 states across the eastern United States. The latest monthly data from the accurate UAH satellite data show the current pause in global temperatures – the second in the 21st century – has been extended to eight years one month.

The modest warming of around 1.1°C seen since the ending of the Little Ice Age around 1830 has not affected the recent production of potatoes in the U.K. A little extra warmth and slightly more rain, not to mention a tad more life-enhancing carbon dioxide, is beneficial for most plants. In the past, cold, wet weather has been the enemy of the potato crop across Europe. U.K. potato yields have grown since the 1970s, and over the last few years have varied around 5-6 million tonnes a year. The industry has become more efficient with registered potato growers falling in number over 50 years from 70,000 to 3,000. The graph below from Statista plots the value of the potato crop from 2003 to 2021, and shows slightly higher amounts in recent years.

The BBC asks if climate change is putting potatoes at risk by warmer weather. Instead of turning a British agricultural success story into the usual drivelling climate scare that lacks historical and ecological context, the BBC could focus on the excellent prospects for the ‘humble’ spud.

Earlier this year, Qu Dongyu, the Director-General of the UN Food and agricultural Organisation, told the 11th World Potato Congress that total production of the crop could double in the next decade. It is not just the British who love potatoes. They are the world’s third most important food crop, and are consumed by billions of people. Apparently, they generate fewer greenhouse gases than other crops, if that should guide your dietary choices, and are grown around the world in a wide variety of different climates – even rainy, chilly Scotland.